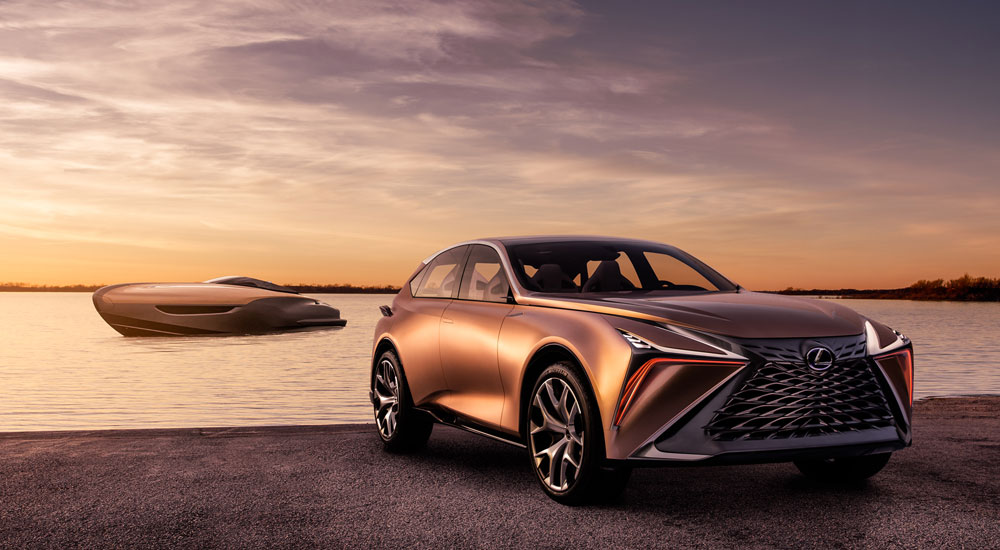 “Based on our amazing experiences in engineering, building, testing and showing the Lexus Sport Yacht concept last year, we’ve decided to take the next bold step of producing an all-new larger yacht that builds on the advanced nature of the concept while adding more comfort and living space,” Tomoyama said.

The new yacht will be built by Marquis-Larson in Wisconsin, and will be a large 65-foot cruiser with “luxury staterooms below deck and entertaining space for up to 15 guests”. 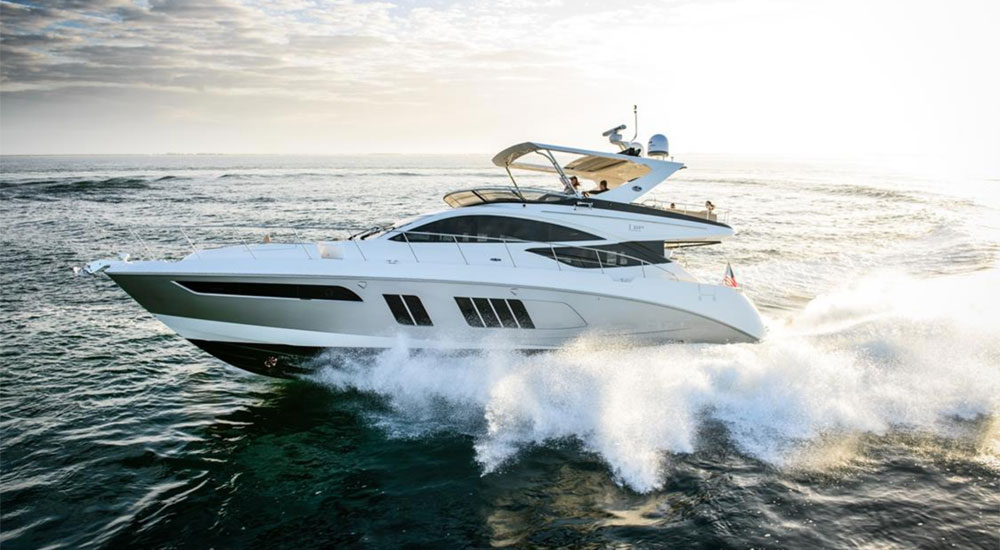 Specifications, pricing and other details of the 65-foot yacht will be announced at a later date.

Well, since all these Paris Accord mongrels (Imo it is happening, but Im no nut) been crying. Won't be long before all cars are banned from traffic. Next phase is the ocean & the skies. Lexus yacht & plane. I'm in!
Please vote for the Lexus Sport Yacht Concept!!
https://madeinwis.com/popular-vote,

Scroll down and please select the "Marquis Yachts - Lexus Sport Yacht"! You can vote every 24 hours until next Monday!

Scroll down and please select the "Marquis Yachts - Lexus Sport Yacht"! You can vote every 24 hours until next Monday!

Thank you!!!
Lexus takes yet another step in making its yacht a production reality by extending U.S. trademarks for Lexus and the "Circle L" logo to "motor boats, yachts, and structural parts thereof". For more, check out my latest Kaizen Factor article.
The Daily Kanban's Bertel Schmitt brings us further confirmation of upcoming Lexus Yacht production. Here are the highlights:

...The big boat will Made in America, courtesy of Marquis Yachts in Pulaski, Wisconsin. The boat also will primarily sold there, which is a wise move as the U.S. is the world’s largest recreational boat market. The boat will be sold in the U.S. “from the latter half of 2019,” Tomayama said. As Toyota’s very own “America first” strategy, the boat shall be exported to Japan in 2020.

Don’t expect rows of Lexus yachts floating out of an assembly line. Annual industry volume for 60+ft pleasure boats is a few hundred. They go for a few million on up...

For the full story:
https://dailykanban.com/2018/03/sunseeker-take-cover-lexus-enters-big-boat-market/
Well, moderators, I wasn't sure where to post this one, since this is an auto forum...but I figure the Garage threads are as good a place as any. Lexus has unveiled a sport-boat powered by two Lexus V8s.

I once had a friend, several decades ago, who had a 28-ft yacht powered by two Chrysler V8s...you would not believe the amount of gas (marine fuel) that thing used. ;)

Lexus goes from land yachts to water yachts with this boat concept
The Lexus Sport Yacht Concept is a pet project of CEO Akio Toyoda. Just this week, Lexus unveiled its fully redesigned flagship, the LS sedan. But the term "flagship" seems a bit misplaced now that Lexus has revealed an actual ship. Well, the Lexus Sport Yacht may be a bit small to be called a ship, but it's as close as many automakers will get.

According to Toyota, the idea for the boat came about when the company's CEO, Akio Toyoda, was trying out one of the marine division's new yachts that use Toyota diesel engines. He wanted to see what a sporty, luxury yacht using Lexus design would be like. At his behest, the Toyota Marine Department and Lexus got to work on the concept you see here.

More than a clay model, this is a fully-functional nautical machine. The Lexus Sport Yacht was constructed from carbon fiber by Marquis-Carver Yacht Group in Wisconsin, and has a pair of V8 engines shared with the Lexus RC F (and GS F, and LC500). You can even see through the clear engine compartment cover that they share the same bright blue-painted intake manifolds. Compared with the automotive applications, each engine makes a bit less power at 440 horsepower. When you have two of them, though, that becomes less important. Together the engines' roughly 880 horsepower can propel the boat to a top speed of 49 mph.

The Lexus Sport Yacht comes complete with many luxury amenities. There's seating for eight on the deck. Two of those seats fold out from either side of the captain's chair "for very special guests." The captain also has access to a pair of touchscreens, a small one in the wheel and a massive one ahead of it for instruments and other information. Down below, the forward passenger cabin is loaded with leather, wood, air conditioning, a table, and sofa seating for six. The yacht's galley has a sink, refrigerator, and stove, and the bathroom comes complete with a shower.

Don't expect to see the yacht on sale anytime soon, since this is just a concept at the moment. That being said, luxury automakers, including Aston Martin and Mercedes, have started competing in the yacht market. And while Toyota's marine division hasn't built a pleasure boat since the Epic line, it probably wouldn't be too difficult for the company to start building this Lexus.

Related Video:
Ah, latest story from few days on this is that they will be producing it in 2019, but different - larger sport yacht thats around 35ft if I remember.

Also, Toyota has been doing this for a long time, and point is that their engines are really efficient compared to the regular marine ones, but it also makes them very expensive.

mmcartalk
Well, moderators, I wasn't sure where to post this one, since this is an auto forum...but I figure the Garage threads are as good a place as any. Lexus has unveiled a sport-boat powered by two Lexus V8s.

Actually, the Lexus Yacht Concept has had its own thread in the Lexus Lounge since January 2017, when it was unveiled in Miami, Florida, with Krew and Mikeavelli in attendance. It also spawned a trio of News articles, all of which have been part of this thread into which I merged your posts.
krew

View the original article post
I've since been told the Lexus yacht will be more in line with the Marquis 720 Fly Bridge:

View attachment 2778
For the people who wanted Lexus to make something more expensive than the LS and LC, their ship has literally come in :D
This article from Daily Kanban is interesting:

Don’t expect rows of Lexus yachts floating out of an assembly line. Annual industry volume for 60+ft pleasure boats is a few hundred. They go for a few million on up. They also are alarmingly cyclical. The Wall Street tycoon who has everything buys boat of that size only once other avenues of spending money have been exhausted. Once the stock market turns, the boats flood Boattrader.com. Boats of that size usually have a crew. Many pleasure boat makers have been bankrupt at some point.

“The main goal is not the number of boats,” said Tomoyama, but the enhancement of the brand. Other carmakers have similar ideas. There is an Aston Martin speedboat, there is a wet Bugatti, and there is a race boat made for Daimler’s performance-offshoot AMG.

The Champagne Gold color chosen for the Lexus yatch concept last year now makes sense with the context of the LF-1 concept. #elevate

Just wanted to take the time to point out and laugh at this post.

Toyota Motor Corp.’s premium brand plans to start selling a 65-foot (20-meter) ultra-luxury yacht in the U.S. in the second half of next year. The vessel, announced at a boat show last week in Yokohama, will have room for 15 guests, three bedrooms with their own washrooms, plus separate quarters for crew. Executive Vice President Shigeki Tomoyama wouldn’t reveal the boat’s price, but said it will be comparable to others in its class. (Sunseeker’s 66-foot Manhattan goes for about $3 million.)

Now that I think of it, two decades ago Toyota to did sell boats here as "Toyota Marine Sports", with their Epic line; it lasted about 3 years.

I didn't realize that they got back in the business with their lineup of Ponam boats with Land Cruiser engines. The insides are pretty nice, I wonder if TMC considered just rebadging them as Lexuses instead, since they don't seem to be sold outside of Japan.