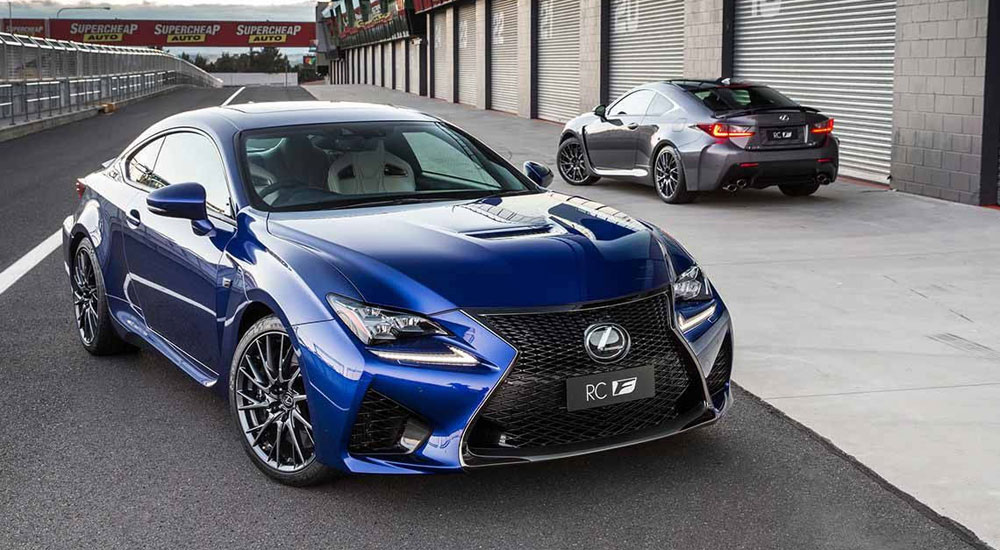 The Future Forecast is a new series that compiles recent analyst projections about the Lexus brand. In this third installment, we cover the RC & RC F coupe.

When the first-generation Lexus RC debuted at the 2013 Tokyo Motor Show, it was to great fanfare. This was the first mass-produced Lexus hard-top coupe since the original SC, with a huge opportunity to capitalize on all the excitement generated by the LFA supercar. The buzz only grew louder when the RC F high-performance variant was introduced at the Detroit Auto Show two months later.

Now four years into the production cycle, the RC now exists in a kind of limbo. Reviews never lined up with expectations and sales were never very strong, but in crossover-crazy 2017, the Lexus coupe only managed 7,363 total sales in the USA.

The question stands — what to do with the Lexus RC?

To start with, there’s no immediate solution. Analysts at Just-Auto are forecasting a mid-cycle refresh this year, while Lawerence Iliff at Automotive News believes it could be pushed to 2019. Regardless, minor changes to the front and rear bumpers will not fix the calls for less weight and more power.

Back in 2014, the LF-C2 convertible concept was revealed at the Los Angeles Auto Show — this Solar Yellow roadster looked every bit like the RC, and it was widely expected to lead to a production model. Instead, it caused a minor revolt among Lexus dealer body in the USA, best summarized by this Motor Trend story:

In fact, under the original plan, the RC Convertible was set to be the next all-new car in Lexus’ lineup. As convertibles make up 1 percent of the total U.S. Market, though, the decision to not do a 3-row RX crossover and go with a convertible infuriated the dealers into some sort of angry revolt. Lexus dealers have been howling for a three-row crossover.

Some inside Lexus are furious over this decision because the RC was strengthened (made heavier than it had to be) to be a convertible — and as it turns out, that was pointless. Why else would it use the center section from an IS Convertible? 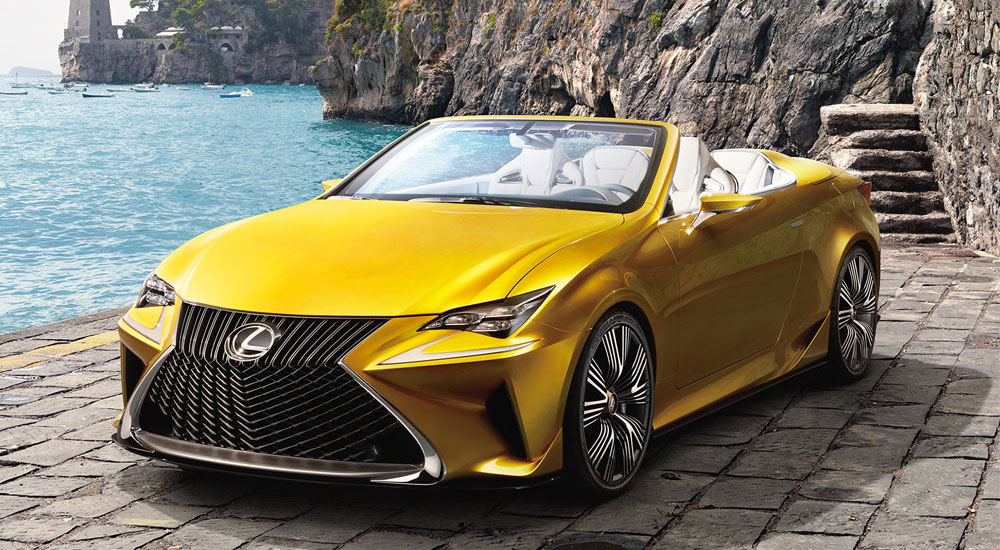 The analysts at Just-Auto, Merrill Lynch, and Automotive News all agree on one thing: the next generation RC will debut in 2021 as a 2022 model, using the GA-L architecture shared by all new Lexus rear-wheel drive vehicles. Even so, projecting the automotive industry four years out is an impossible task, and it begs the question — can the RC coupe survive that long?

(There is one final point to consider, and that’s the importance of the RC F in the Lexus global racing program. Should the RC F GT3 race car start to see consistent success, it would go a long way in ensuring the coupe’s survival.)

As long as they don't do obviously stupid things like making sedan versions of the coupe (which is apparently a good idea according to BMW) it will be fine.

To me it feels like the RC is an inconvenient product that stands in the Supra's way. We always get that 'the Supra can't be a powerful car because Lexus has the RC-F' kind of comment. It's the one model I hate with passion in their vehicle line-up.

ssun30
As long as they don't do obviously stupid things like making sedan versions of the coupe (which is apparently a good idea according to BMW) it will be fine.

To me it feels like the RC is an inconvenient product that stands in the Supra's way. We always get that 'the Supra can't be a powerful car because Lexus has the RC-F' kind of comment. It's the one model I hate with passion in their vehicle line-up.

Doing a 4 door coupe is probably the most resonable thing to do, because 2 door cars do not sell, and neither do sedans sell as well as before. Even hatches sell worse than before.
I'm really not familiar with Toyota's manufacturing constraints. How in the hell can the world's biggest manufacturer bind itself to a choice of building either a two door convertible or three row CUV. That's the struggle I would expect from Mazda or Jaguar but not from Toyota and Lexus. Unless bean counting is still the thing within Lexus division
Ten years from now, I will be surprised if "four door coupes" even exist. The idea made more sense when sedans were mostly of the traditional three-box variety - thus allowing "four door coupes" to stand out more dramatically, but the market has spoken and people clearly want more svelte, sexy sedans and they don't care if you call it a coupe, sedan, scooter, crossover or anything in between. The only way I can see "four door coupes" living on is if they become even more dramatic - something like the LF-LC's translation from concept to the production coupe LC 500 but with two extra doors - it would have to be that dramatic and almost shocking. The only one that I've seen that fits this mold lately is Mazda's Vision Coupe Concept:

Furthermore, with the market for passenger cars contracting, it will become even more difficult for automakers to justify offering two sedans at a similar size/pricepoint. Lexus ES and GS are great examples of this. I think we will see all sedans moving to a more shapely, fastback form... just like we have already seen with the LS. I believe ES and IS will follow the same philosophy when they are redesigned.

So that brings us to the RC. As Kevin has already pointed out, it's kind of hard to see what else could be done to help the current generation, especially considering the minuscule sales volume. Based on the released photos of the RC F and GS F 10th anniversary edition, we already know the car is getting the same 10.3" screen the refreshed IS received. Other than that, I obviously expect an updated front and rear end and hopefully some suspension tweaks. I assume they could rework the RC F's intake system to get the same 471hp the LC 500 has.

The thought that Lexus used the IS C's center tub because they ultimately planned to make a convertible makes a lot of sense, but weight is the RC's biggest enemy and it's all for no reason now. There's nothing they can do to remedy it until the next gen. Looking at LC 500 and LS 500, GA-L hasn't proven to be exactly be featherlight either...

If the RC lives to see a second generation, I have a feeling we'll see it more closely aligned to the IS than the current IS/ISC/GS Frankenstein car. Developing it alongside the IS and keeping the differences between them minimal would reduce manufacturing costs and also make it easier to engineer an IS F and RC F side by side. Seeing that the GS could be dropped from the lineup, this closer alignment with the IS makes a lot of sense to me.
Lexus should take both the RC and LC use both these two cars to go after the exotic coupes of the world like the porches and others. The RC sales will improve as it goes into next generation, these are new cars from lexus for now and people who buy these cars already had other exotic coupes in their minds whilst they were young. poor sales have nothing to do with how they drive or lack of power thereoff

Horsepower and handling may not be everyone's first concern, but it's silly to say they had no impact on sales. I would also argue that the poor media reception at launch also killed the car's momentum.

krew
Horsepower and handling may not be everyone's first concern, but it's silly to say they had no impact on sales. I would also argue that the poor media reception at launch also killed the car's momentum.

I guess lexus can do more when it to marketing. I find lexus advertising on TV (adds) are terrible and not memorable. Poor media like Jeremy Clarkson does lexus no good. I would advice lexus management to sometimes confront some obviously bias media. About the RC and LC, lexus must add a convertable on the RC and add a hardcore LCF on the lc give the customer sometime to get used to these cars the sales numbers should pick up on their next genaration
Well its not just weight too. The RC F debuted with a revised 5.0 V-8 not a new one. The competition all debuted new engines. As much as I love the 5.0 V-8 and its sound it is slower than the Germans and you can't tune it.

I think though lets not look at the RC and RC F as doing too poorly. This is their first effort in this class and people are buying them. Coupe sales always do well at first and usually drop off fast. This is no exception. It is great to see two options in the RC and LC for coupe buyers that want a Lexus.

One point I think it needs is a center interior console that matches the doors. The doors are a significant change and upgrade from the IS. The center stack just lacks behind the competition and the new C-class really elevated interiors.

I am confident the next generation will be a leap not just a jump.

Also, why no RC 300h here in the states? I think that model would help sales a bit as the RC doesn't get great MPG.

mikeavelli
Also, why no RC 300h here in the states? I think that model would help sales a bit as the RC doesn't get great MPG.

Agreed! Lexus should bring the RC 300h to North America and market it to techies, greenies and people who just want good mpg's. BMW doesn't have a hybrid 4 Series.