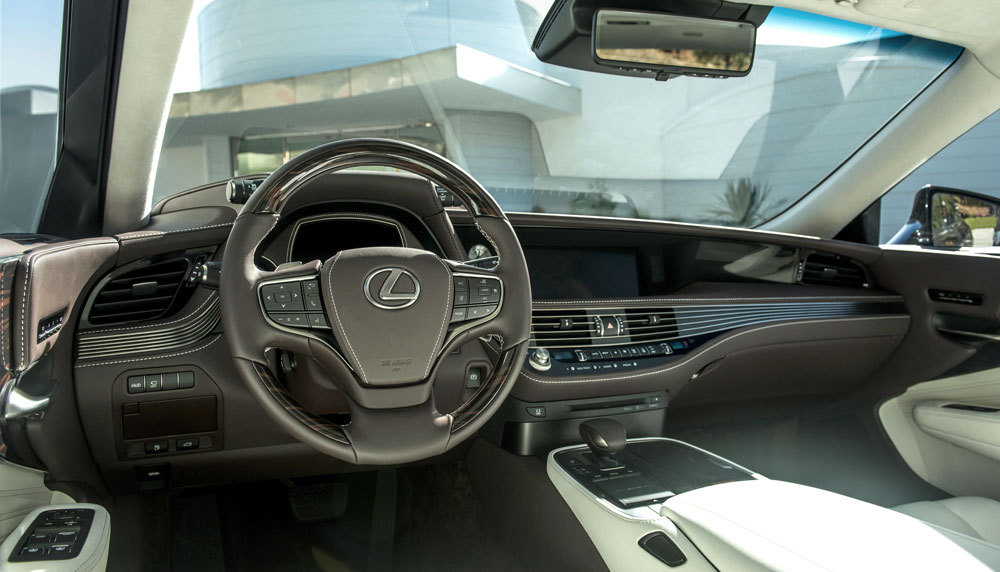 There’s plenty of opinion out there about the new 2018 Lexus LS flagship, but this video from Winding Road really demonstrates what it’s like to be in the driver’s seat — put on your headphones, go fullscreen, and ride along:

krew
Only if you live in Japan, I believe. Won't be available in other markets at launch.

Europe too, just not usa

Oh, cool! Thanks for the tip. Hard to keep all the markets straight, conversation at the launch was this would be a Japan-only feature.
krew

Black Dynamite
1. That Maganese Luster looks like the best paint color. It takes a lot of the sporty edge off, and lets the design show through well.

2. This car has gained a lot of weight! Look up the current cars LWB weight and it is in the range of 300 lbs lighter. The current LS is one of the lightest cars in the segment. That said, it normally runs 6.0 0-60 when tested. How this cuts 25% off that with 300+ extra pounds is hard to believe. I guess we'll know the truth in future tests.

3. I like this, but I don't love it. It looks more like a stretched GS than a proper, conservative LS. I wanted the LF-FC Concept to reach production. It looked far more expensive and had a visual grandeur this lacks. It was the better design, clearly. This is sporty and youthful, relative to the German prestige class fare. It will get noticed, but will it jove with the 60+ demographic still buying such cars?

It is also interesting that Lexus avoids directly competing with the S-Class in power, or price. After 30 years, it comes across as fear, a lack of confidence. I expect more, at this point. If they had the concept's design, Lexus could go head-to-head with any S-Class and win. That was my dream, anyway. Oh well....

They will sell their 1000 units a month, then introduce the LSF model, with a TT 600HP V8 for $110k, and this generation will be generally a success story. It just will never be on the level of the Mercedes S-Class. It will never be the flagship of flagships. It will be a great "budget buy", a "smart money" option. My question is: When is Lexus going to be more than that? If not now, when?

Look at it this way. The S450, the V6-powered S-Class, costs $90 to start. It has 362 HP, a 9 speed transmission, is a half second slower and far less standard equipment. Why is Lexus charging $15k less for a car that, apples-to-apples, is a superior car, with more speed, power, and amenities? It comes across as afraid to compete, directly. That's my problem. I say grow a pair, and be that prestige brand, on par with the S-Class, not less than, but a better buy for the same $90k money? Unless you don't think you're worth it, or the market respects you enough.

I think they sell themselves short. After almost 30 years, why relegate yourself to second-tier in this class? No one else is doing it. Lexus is doing this to themselves.

I just question the vision of this model from the execs. They seem very happy to aim low with their greatest vehicle, and go after the lowest hanging fruit of the prestige class, and not let the LS be all that it can be. The LS was dreaming of looking like that LF-FC Concept car, and someone at Lexus said "Get back to scrubbing those prestige class floors, Cinderella!"

My problem is not with the car, which seems like a really great car where they sweated the details as only Lexus can, but the positioning and market strategy. And not employing the concept's superior design.

They hit a solid single up the middle when they needed to swing for fences, and have this new model propel the brand to new heights. And that is truly a shame.
BD

So about that 6 second zero-to-60 time from Caranddriver, that was an AWD model, which is usually quite a bit slower than its RWD counterparts. If they had tested the RWD version, expect that they would've gotten times closer to 5.4.
Notice how soft the door closes!
Few international ones

i would like to see a review of the LS350 in english
Hanging in a few spots where it seems the valet is just full of black S-classes a white LS F-Sport really will liven things up. Really courageous styling by Lexus here and I think it is going to really win some people over.

I now see the LS leaning to the Tesla/Panamera/Quattroporte side of styling and leaving the 7 series/S class A8. What a bold move!

Agreed, would love to drive one myself. Hey Lexus China!
Not sure if anyone posted this yet. I know someone asked a few weeks ago, I have been waiting for the available packages to come out also. No Pricing yet though.
http://www.lexus.com/models/2018LS?cid=sf59682137+sf59682137