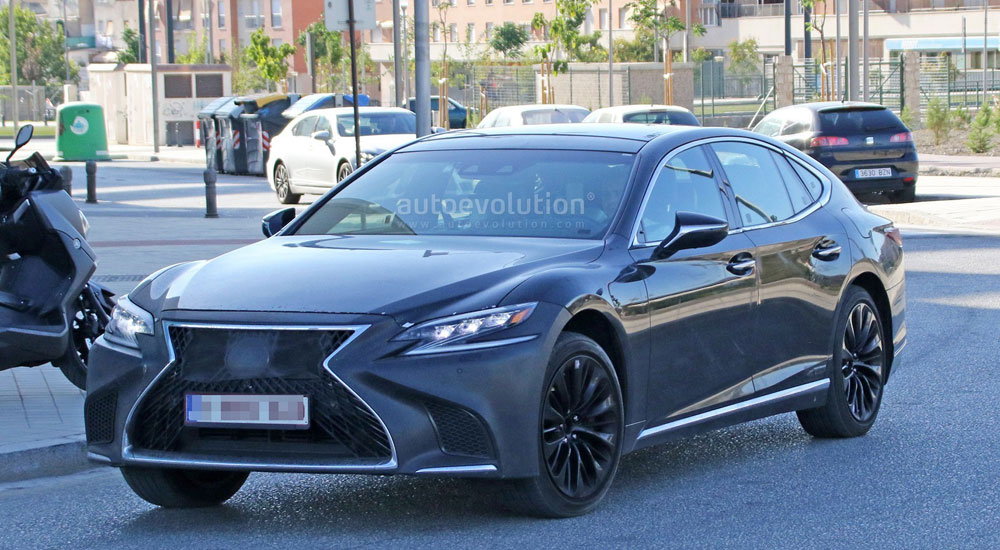 A mystery Lexus LS prototype has been spotted in Southern Europe sporting a modified front grille and bumper — from Auto Evolution: 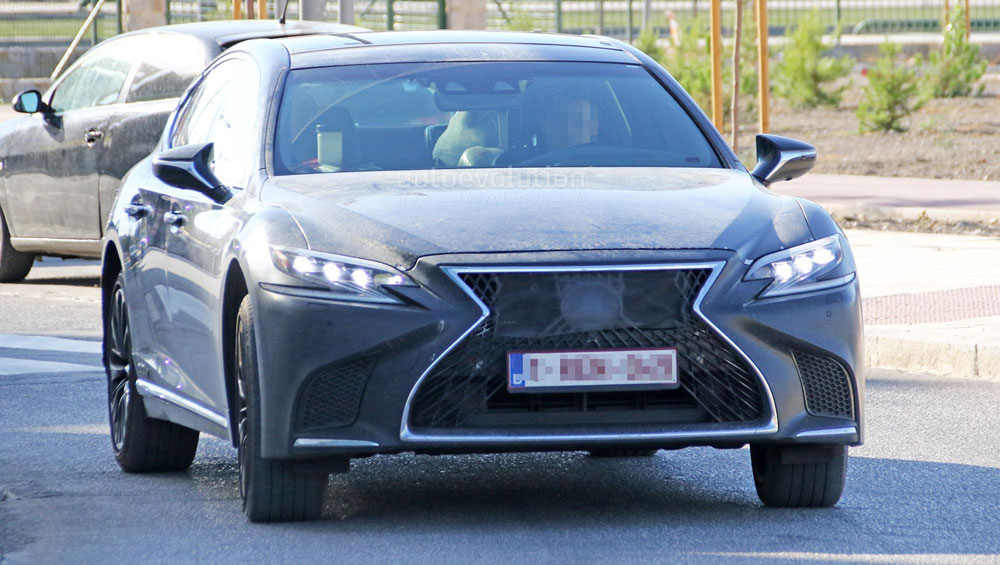 The bumper is highly unusual, as it has the F SPORT mesh grille with additional cutouts but the side intakes are unlike either F SPORT or standard models. The extra airflow to the end could indicate a new powertrain — perhaps even the oft-rumored twin-turbo V8. 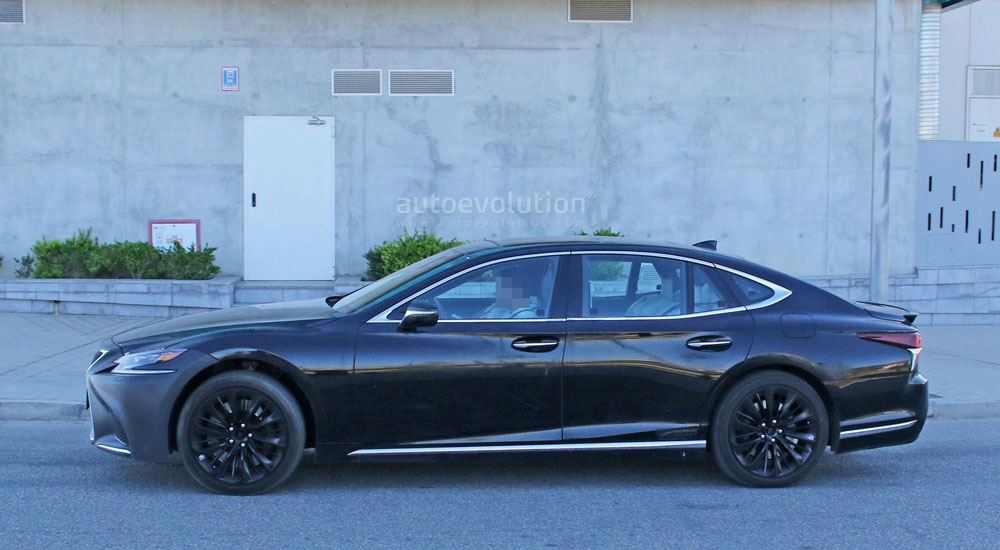 Front wheel gap is much higher than any previously seen fifth-generation LS, perhaps suggesting all-wheel drive. The hybrid badge has also been taped up. 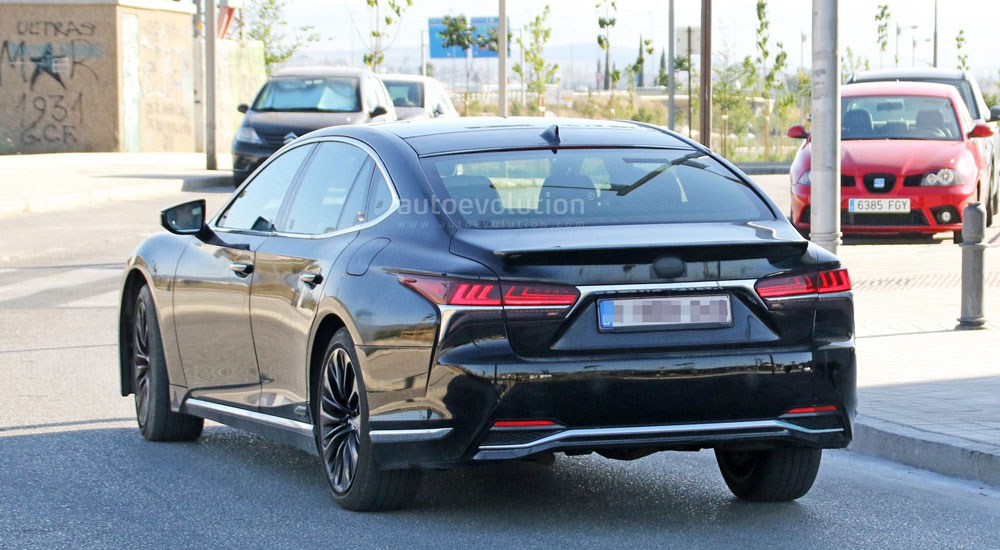 From the rear, we can see an added spoiler and no exhausts –unsurprising given the hybrid badges. However, the spy photographers made a special point of mentioning that the exhaust was extremely loud, making it quite possible that the hybrid badges are subterfuge.

It would be strange for Lexus to be working on a high-performance LS F before building a LC F coupe, but given the state of this prototype’s camouflage, an LC F could be hiding in plain sight.

What do you think? LS F? Additional LS F SPORT testing? Could the sixth-generation LS be getting a V8 option? Check out all the spy shots at Auto Evolution and let us know in the comments.

Yes.
rear spoiler too. I just love black cars . that LS looks sick
I wonder if it is a V8 or the LS-F?
5.0L V8 with hybrid system？
Lexus Could Have a High Performance LS in the Pipeline

If new spy photos are any indication, Lexus could be preparing a high-performance version of its new 2018 LS full-size sedan.

Spy photographers caught this prototype undergoing hot weather testing in Southern Europe recently, but it wasn’t the car’s appearance that piqued their interest. The prototype does look a bit curious with additional cooling vents worked into the grille and a subtle trunk spoiler not previously seen on LS F-Sport models, but according to photographers, it was the extra-loud exhaust note that made this test vehicle stand out.

It seems possible that Lexus could have a full-fledged LS F model in the works. The automaker already offers an F-Sport appearance package on the 415 horsepower twin-turbo V6 LS500, so it’s clear they are interested in injecting their full-size sedan with at least some sport-inspired components. If an LS F did make it to market, it would find stiff competition in the way of the BMW M760Li and Mercedes-AMG S63.

It’s possible Lexus could debut a new LS variant at the upcoming Frankfurt Motor Show in September. However, seeing as the LS is a model well-suited to the North American market, we’re willing to bet that any LS variants it has in the pipeline will be shown at the 2017 Los Angeles Auto Show in December or the 2018 Detroit Auto Show in January.

An unusual grille and bumper could mean new powertrain testing.

View the original article post
thnaks for the news
why uper the ligte near the hood is damage??????

farid
why uper the ligte near the hood is damage??????

It's probably wrapped , the wrap peeled off.

I also think this is a hybrid because we don't see any exhausts.
Color me skeptical that this is a full-on LS F prototype. Where are the signature F diagonal front fender vents? And, as others have mentioned, no exposed exhaust outlets (and those would be diagonally stacked if this were a true LS F). I'll go with the developing consensus here that, at most, they're testing a V8 hybrid successor to the LS 600h.
I recall rumors saying the next gen of F cars may go hybrid.
I'm very curious to see how this will be received. Is this a push too far for the typical Lexus consumer? I'd have to imagine this car will be quite expensive and will likely be positioned for conquest sales.

Joaquin Ruhi
Color me skeptical that this is a full-on LS F prototype. Where are the signature F diagonal front fender vents? And, as others have mentioned, no exposed exhaust outlets (and those would be diagonally stacked if this were a true LS F). I'll go with the developing consensus here that, at most, they're testing a V8 hybrid successor to the LS 600h.

I agree with your point the only other logical explanation is maybe they are testing the LSF engine and transmission with regular LS body but that won't explain the trunk spoiler. or maybe this is the LS600h replacement (one can hope). About the exhaust outlet, if you look under the car in the rear picture you will there is an exhaust there with the tip pointing down. And the person that took the picture said the car was unusually loud.
exactly....

Alshamsi
It's probably wrapped , the wrap peeled off.

wher are you from mr mohamad taha????
A classic ToMoCo mule meant to confuse and bewilder. Taped-up hybrid badges, a modified front bumper, a loud engine yet no visible exhaust, a very high ride height, and rather large rear spoiler, plus some wrap on at least part of the car. Also notice the tires are not that wide. My guess is this is a powertrain mule at best, not a full vehicle prototype. If this were a full LS F prototype, I'd expect more pronounced bodywork, a lower ride height, and wider tires.

Sorry, meant for the upcoming LS F. This cannot be the LS F.