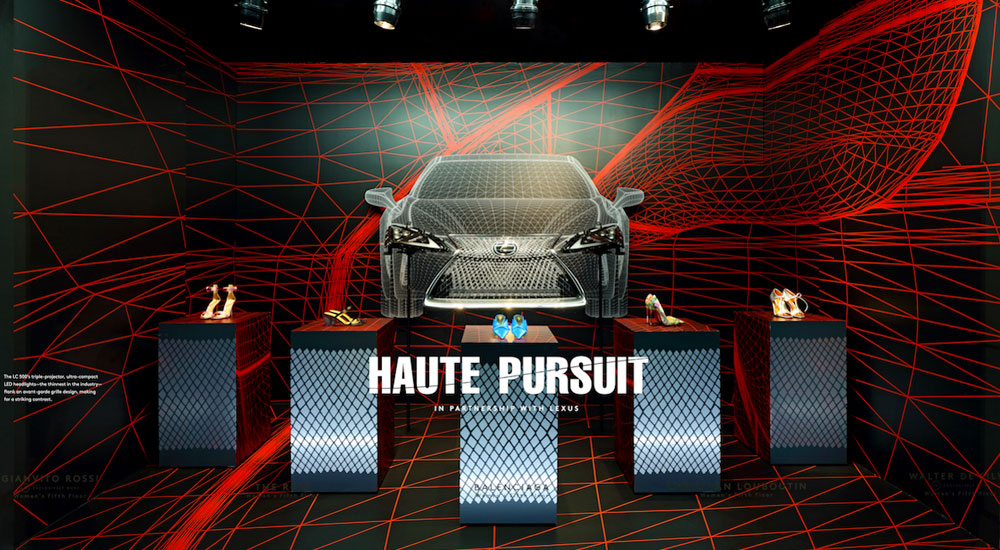 Lexus has teamed up with Barneys New York for an elaborate window displays at their flagship Madison Avenue store in NYC. Each of the four installations is inspired by a different element of the new Lexus LC coupe — here are photos and detailed descriptions from the Barneys blog: 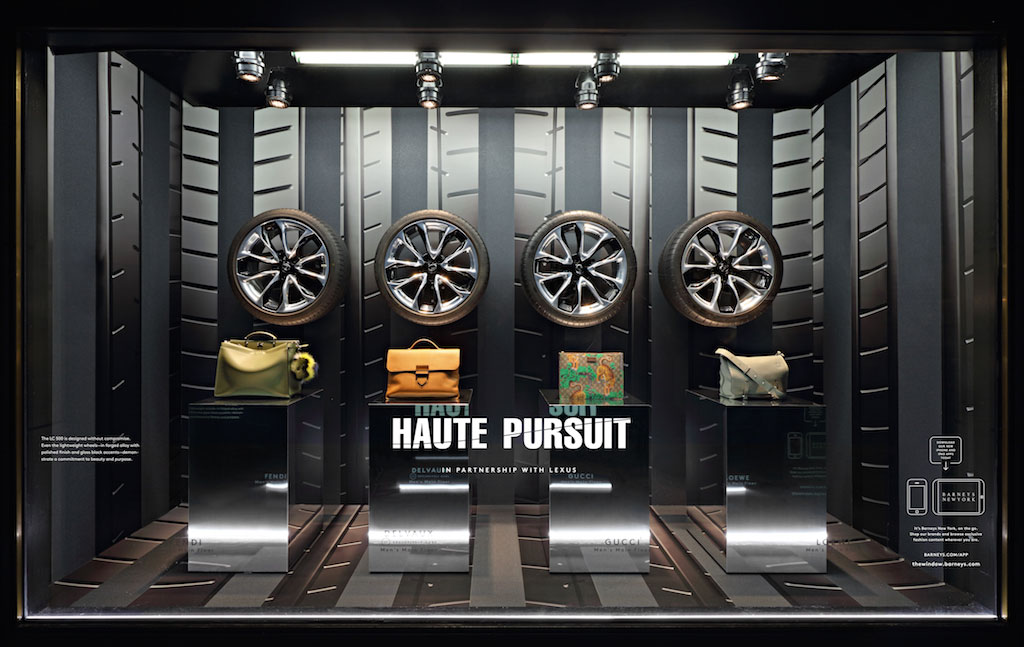 First up are the vehicle’s lightweight, forged alloy wheels, whose polished finish is reflected in the window’s chrome finishes and gloss black accents. The coupe’s high-performance tires also make an appearance, since they too have become a visual feature of the LC 500. “The feeling of the first window is largely driven by the texture of the very special, performance-based tires,” Mazzucca says. 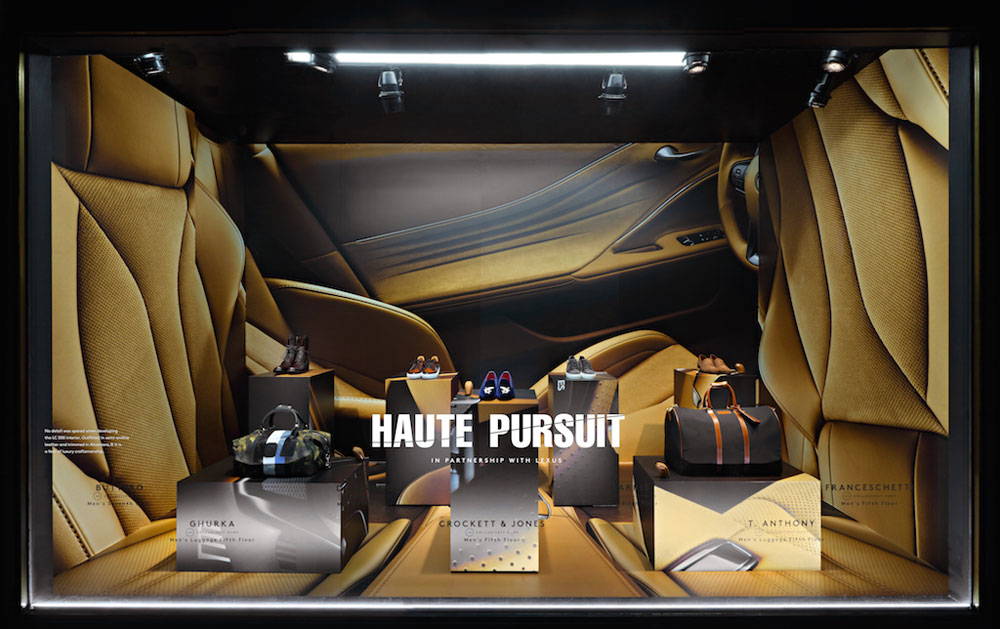 Moving up Madison Avenue, next comes the window focusing on elements of the vehicle’s rich interior, which was painstakingly crafted by Lexus’ meticulous Japanese artisans. Details like the elliptical steering wheel, distinctive contoured door panels, and perforated leather have been photographically enlarged to create an abstract, landscape-like environment for a selection of men’s shoes and bags. 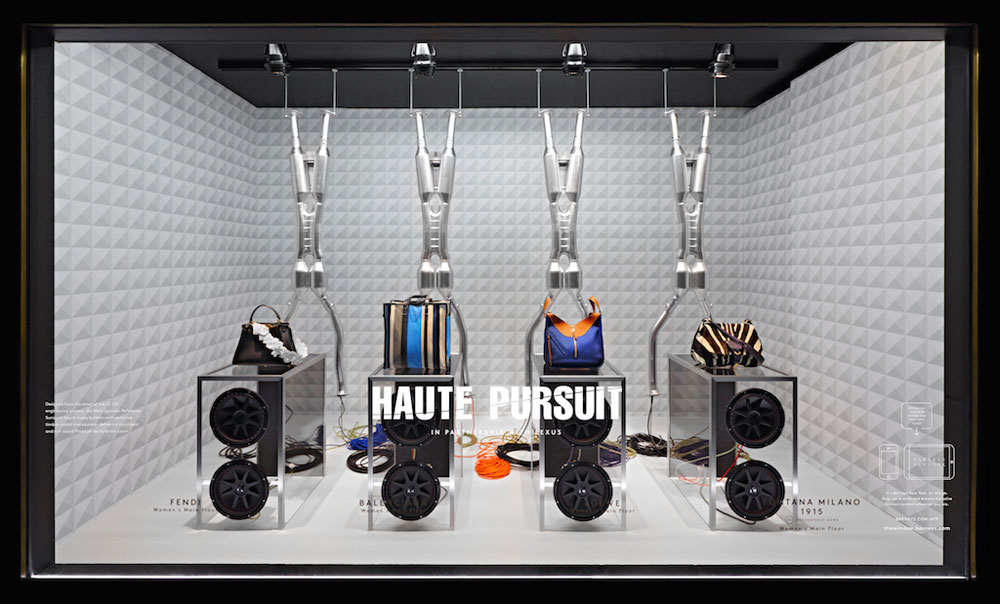 Next up, just north of the store’s main entrance is a window dedicated the vehicle’s Mark Levinson-engineered sound system and its connection to the LC 500’s revolutionary Active Sound Control. “Part of what makes that sound happen are the dual exhaust pipes that live under the car. Lexus sent the actual parts to us, and we then refinished them for display,” Mazzucca tells us. “We then clad the room in a print of acoustic panels and built the plinths into speakers, which are fed by wires that come directly from the exhaust pipes themselves. It’s the idea of how you translate the sentiment into display.” 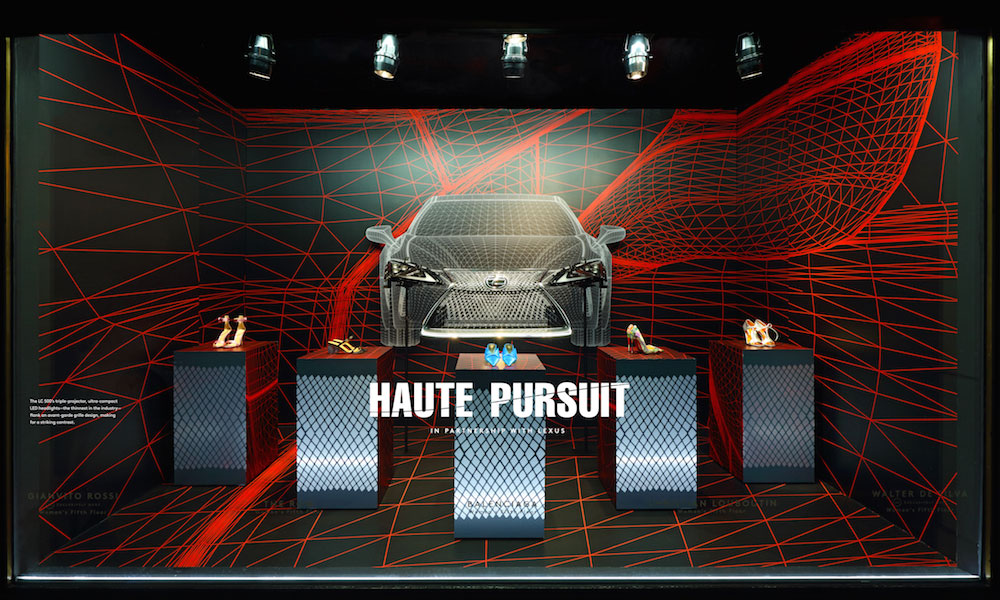 Lastly, the fourth window is a tribute to the exterior design of the LC 500 and features a life-sized line rendering of the luxury coupe. “Two key features that are very specific to Lexus are their headlights and their grill, so we augmented the line drawing of the car with real, 3-D version of these elements,” Mazzucca says.

The ‘Haute Pursuit’ window installation is now on view at Barneys’ Madison Avenue flagship and will run through Sunday, July 16th.