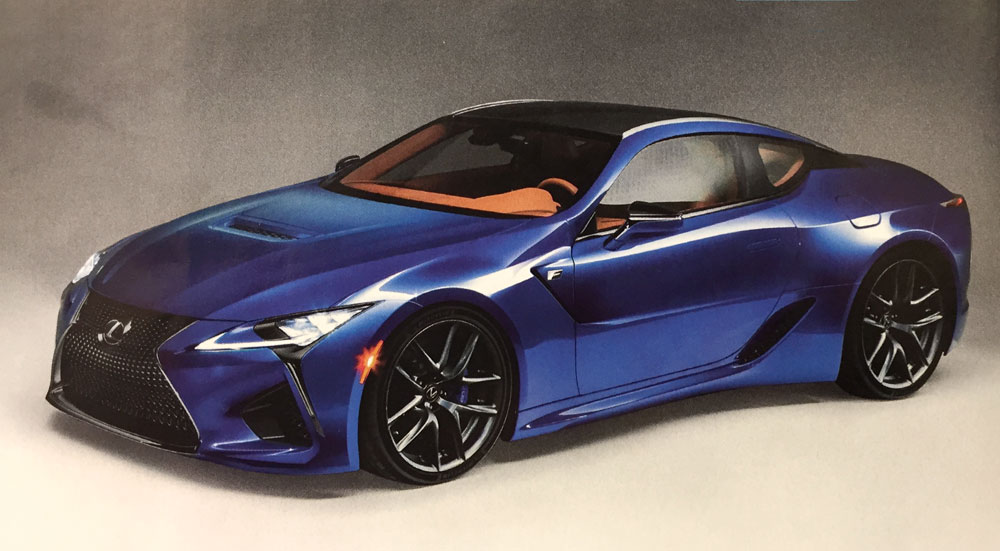 Automobile magazine claims the much-anticipated Lexus LC F will be arriving in dealerships by 2019 in their latest issue — there’s also an exciting new rendering (see above) and some questionable “insider information”:

Lexus has promised nothing wearing the F badge will have an engine smaller than a V-8, so look for the same naturally aspirated 5.0-liter V-8 from the LC 500 tuned toward the 500-hp mark.

If the LC 500’s 10-speed automatic proves to be better for smoothness than performance, Lexus will probably swap in an eight-speed automatic. Expect a torque-vectoring system, beefed-up brakes, lightweight wheels, more aggressive aerodynamics, a rear defuser, and quad exhaust outlets.

When the LC F is eventually released, it will represent the next chapter of F performance — adding 30 horsepower to a 10-year-old V8 speaks more of the past than the future. As a matter of fact, GS F deputy chief engineer Akio Iwasaki is quoted by Motoring Australia as saying:

“We are developing a turbo motor as a replacement for this one,” Iwasaki told motoring.com.au at the European launch of the new GS F yesterday.

“We are investigating it still, but it’s definitely going to be turbocharged… The problem is that [at the moment] turbocharged engines do not fit to one of our three brand philosophies, that of the Limitless Power Feeling,” the boffin stated.

Car & Driver: Why don’t you use turbochargers on the F cars?

Mark Templin: [F program chief engineer Yukihiko] Yaguchi is a big fan of naturally aspirated engines because of the visceral effect that you get, the sound of it, and the way that it feels. That being said, it doesn’t mean we’ll never have a turbocharged F product, but if we do, it will probably be a big engine that still gives you all of those attributes that he wants. He really feels that it’s important to have the sound quality that you get out of those big engines.

Regardless of what may be coming to the Lexus lineup in the future, the LC F has to be the only choice to introduce a new high-performance turbo engine. What exactly will this engine be? Strangely enough, Automobile published this speculation last year:

Based on the next-generation Lexus LS, the new two-door will offer three potent powertrains: a high-output version of the brand’s 5.0-liter V-8, a hybrid setup making around 500 hp, and a range-topping F with a twin-turbo V-8 that could top 600 hp.