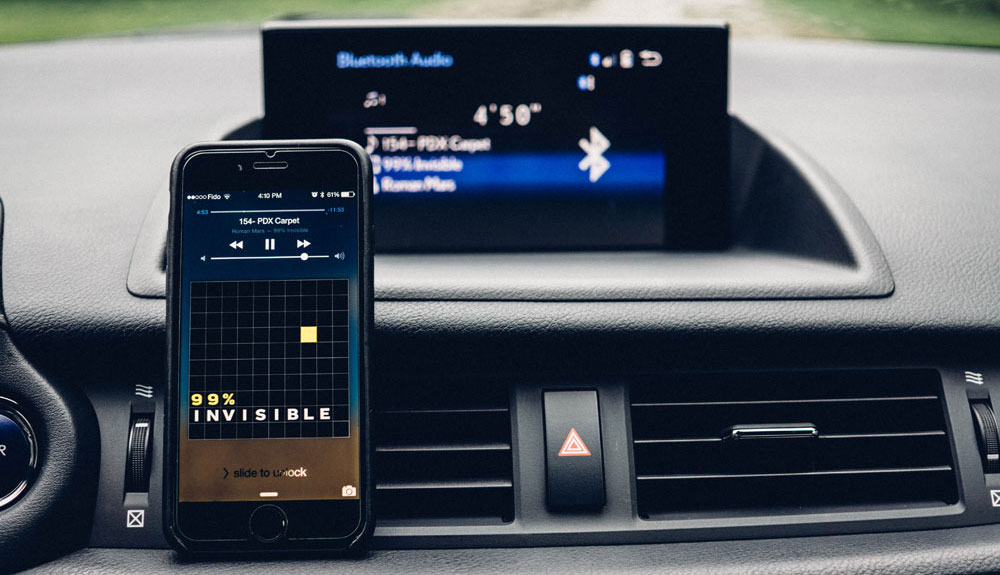 Beyond turning the wheel and pushing the pedals, the thing I do most in the car is listen to podcasts. In many ways, it feels like the best way to use the time — simply put, it’s either podcasts or silence when I’m driving alone.

With that in mind, I would like to share five podcasts I listen to on a regular basis.

If there’s one podcast to start with, it’s Serial, a true-life crime show from the creators of This American Life and hosted by Sarah Koenig.

The first season is completely self-contained, and deals with a convoluted murder in 1999 and a potentially innocent man in jail. It’s gripping stuff, and works well as an introduction to the medium.

99% Invisible is hosted by Roman Mars, and is self-described as a show “about all the thought that goes into the things we don’t think about”.

Really, it’s a show about the details in life, and runs the full gamut of topics — one episode about building a nuclear waste disposal stronghold, the next about the carpet at the Portland Airport. It’s random but thoughtful, uneven in topic but never in quality.

The topic of the Stuff You Should Know podcast with Josh Clark and Chuck Bryant should be obvious: it’s experts talking about stuff you should know. Like 99% Invisible, the topics are all over the map — you can find out the history of tea, learn about police dogs, or meet people that no longer use refrigerators.

The Pipeline is the show that started my podcast obsession back in 2010. Hosted by Dan Benjamin, The Pipeline features in-depth conversations with with designers, geeks, and entrepreneurs. I try to use a very similar format with the Lexus Enthusiast podcast.

So many guests of the show are personal inspirations, including Metafilter founder Matt Haughty, Jason Fried of 37 Signals, and the amazing Gary Vaynerchuk.

The show originally ran 16 episodes in 2010, and has recently started back up again — the interview with Tim Ferriss is great, if you’re looking for a starting point.

Finally, my absolute favorite podcast is Back to Work with Merlin Mann & Dan Benjamin. What started as a show about personal productivity has morphed into something else entirely — this is two people trying to build a better life while still having fun, and I find that the topics discussed always resonate with me.

It’s not a show for everyone, and I wouldn’t be surprised to hear most people don’t like it at all. No matter, there’s no other show I actively wait for every week.

Last thing, I’d like to make a podcast app recommendation if you’re using an iPhone or Android — after trying every podcast player under the sun, I’m very happy with Pocket Casts (iOS/Android).