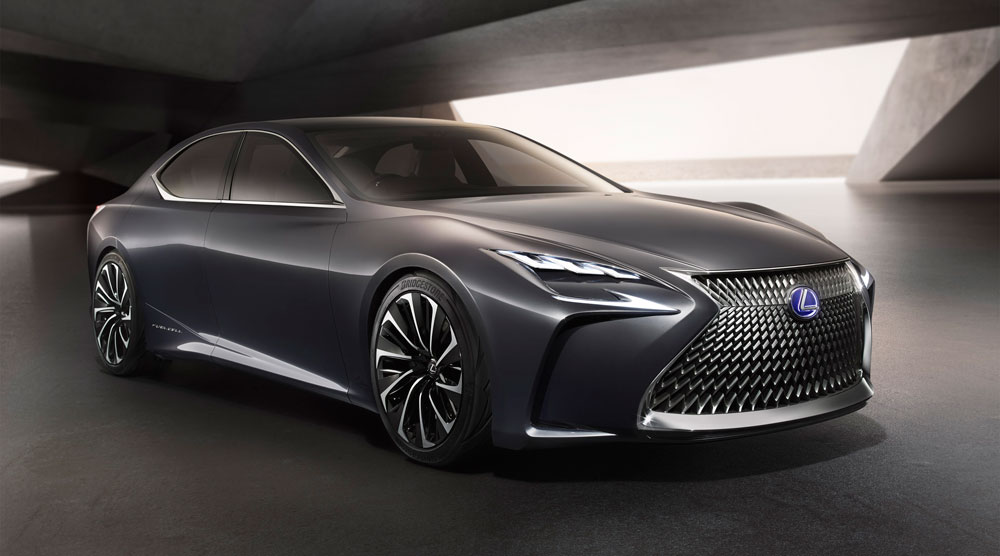 Lexus has just unveiled the LF-FC concept, a “visionary new vehicle that offers a peek into the design and technology direction of the brand’s future flagship sedan.”

There’s plenty of information to get through, so let’s start off with the official press release and photos — live photos will be posted to the site following the show, but you can always follow along on our social channels: Lexus News Live Twitter account for frequent updates, Instagram, and Facebook.

“Lexus wants to surprise and evoke emotion with its distinctive design and forward-thinking technology. For us, it is more than just a car, and we should exceed conventional imagination. The LF-FC expresses our progressive luxury and high-tech vision of a not so distant future”, said Tokuo Fukuichi, Lexus International President. 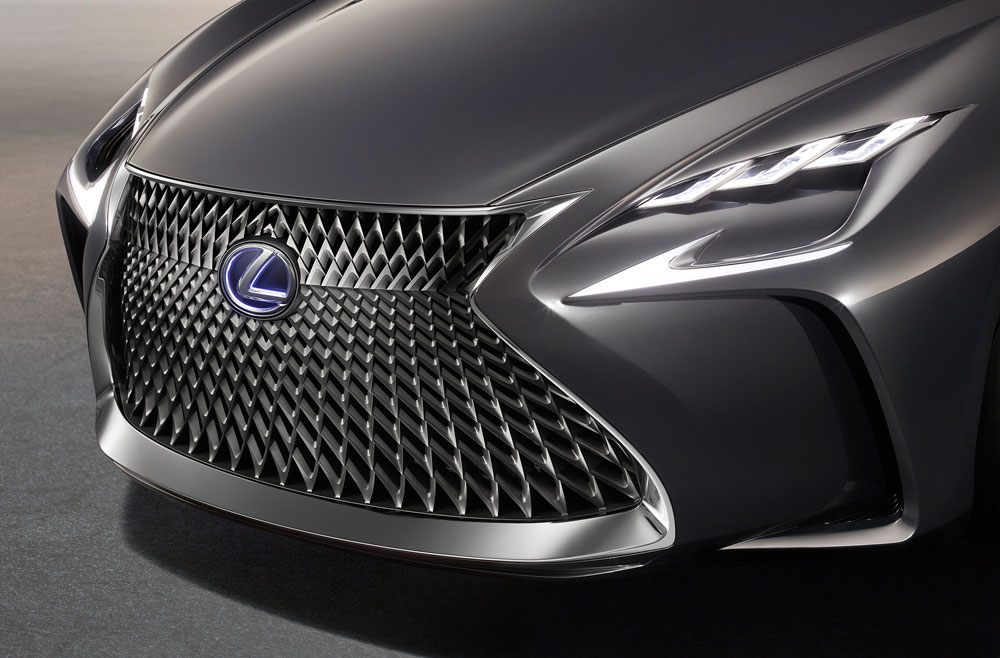 The LF-FC features a fresh new styling theme that embodies Lexus’ “L-finesse” design philosophy. From every angle, the sedan is aggressively elegant, exuding the spirit of a grand touring vehicle. An evolved version of Lexus’ signature grille with a new mesh design dominates the front, while floating “L-shaped” daytime running lights (DRL) extrude flawlessly from the front fenders. The rear is highlighted by striking new taillights that adopt the same floating theme as the DRL. When seen from its profile, the LF-FC’s true character is revealed. The roofline flows from front to rear in the manner of a “4-door coupe,” suggesting that this vehicle isn’t just meant for straight highways, but to also be enjoyed on twisty roads. The sporty 21-inch aluminum wheels with carbon fiber reinforced plastic (CFRP) rims, add an extra dose of flair to what is already a dynamically styled machine.

The spacious interior of the LF-FC has been designed to wrap its occupants in a comfortable yet futuristic environment, while providing the driver with a highly-functional cockpit. The cabin has been designed in two sections, top and bottom. The top conveys a sense of openness, allowing the driver to concentrate on the road ahead without feeling constrained. When seen at eye level, the front seats seem to be floating. 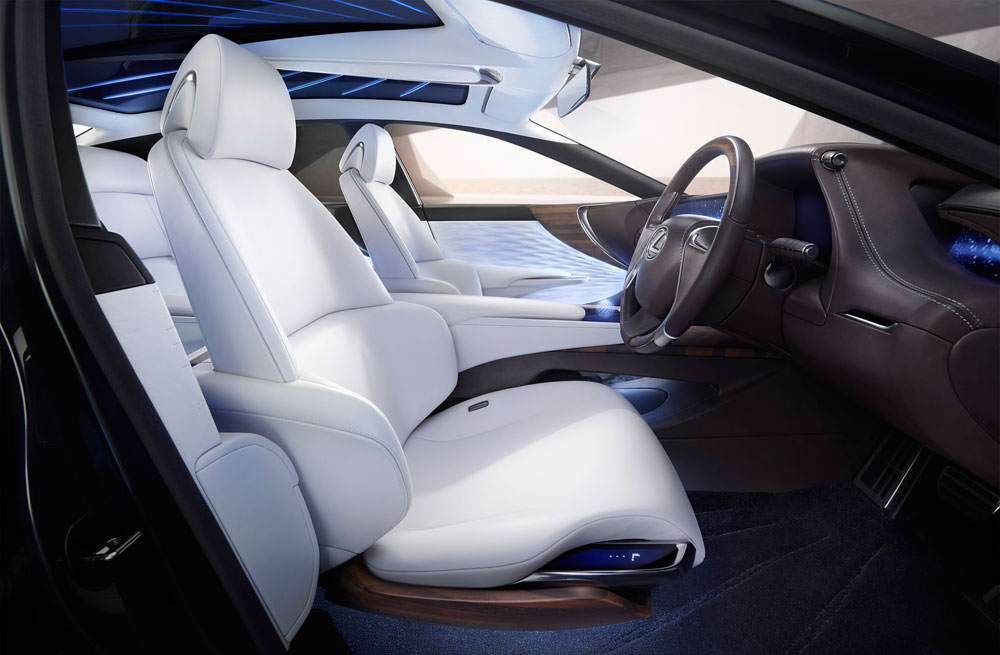 The rear seats have been designed for those who enjoy being driven, offering a reclining feature and plenty of head and knee space. High-quality aniline leather on the seats, doors and dashboard enhances the level of luxury of the interior. 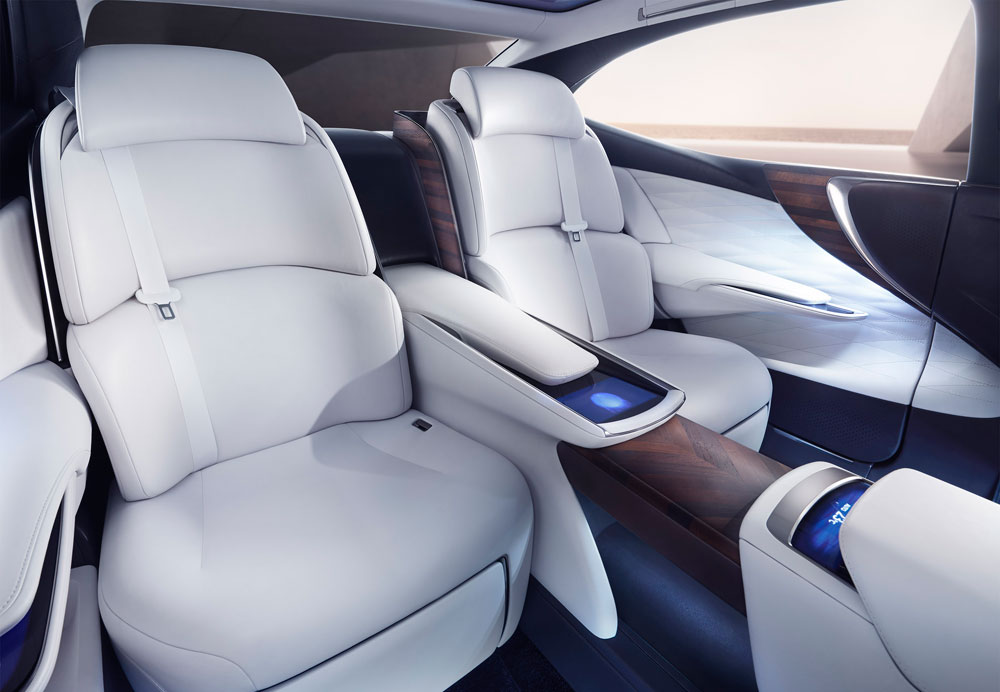 Highlighting the new technology inside the LF-FC is an advanced human machine interface that can be operated by simple hand gestures, without the need to touch a panel or controls. A small holographic image on the center console indicates where the system can interpret your hand gestures to control the audio system and ventilation. 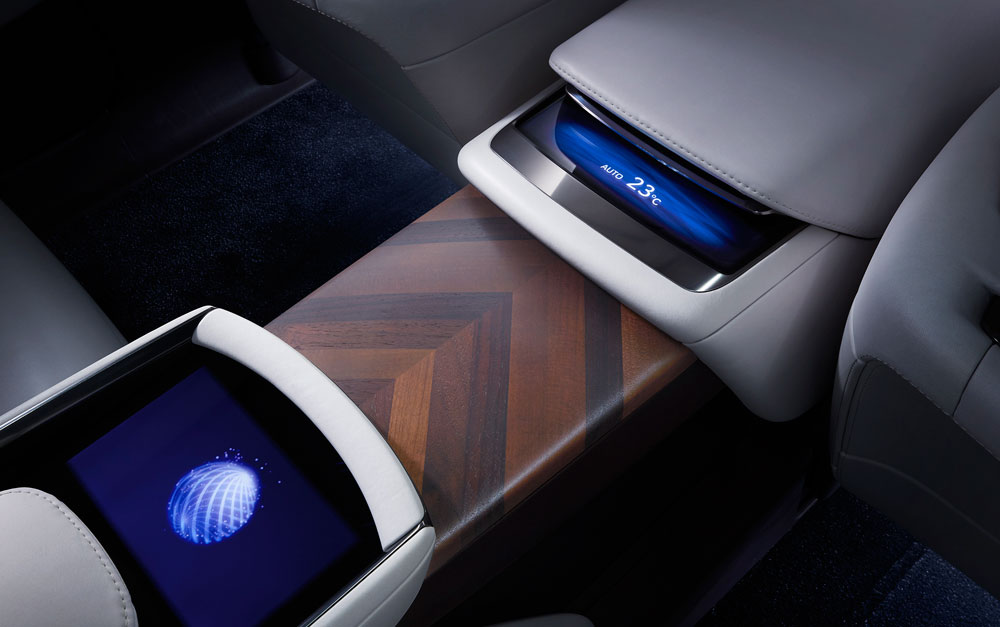 At the heart of the LF-FC is a high output fuel cell power system that energizes the rear wheels, and also sends power to two in-wheel motors in the front, making the LF-FC all-wheel-drive. This innovative drive system allows precise torque distribution control between the front and rear wheels, giving the full-size sedan exceptional dynamic handling and superior road stability. The strategic placement of the fuel-cell stack at the rear of the vehicle, power control unit at the front and T-formation configured hydrogen fuel tanks result in front and rear weight distribution optimal for a sporty sedan.

Using automated driving technologies, with elevated traffic environment recognition, prediction, and judgment function, the LF-FC provides a safe and efficient driving experience for its occupants and supports the vision of a world without traffic accidents.

Breathtakingly beautiful!
I love it. I LOVE IT!
I didn't know my first reaction really but of course I'm on a trip and my time zones are thrown off the more I look the more I think wow Lexus came up with this idea? Wow a gorgeous beauty.
Sweet Lord this is magnificent!!!!! I love it! The LS will be kick-ass!
Okay I'm more awake now very happy with it. It makes a statement! Question since this is just a concept car when does it get released and when do we start seeing the real thing with all the options? I know our current LS has been used for a long time and this just needs to be on the streets!
It is absolutely gorgeous!! I cant wait to see production version of LS. S-class, BMW 7series and Audi A8 crusher!
I'm completely satisfied.
Insanely gorgeous!! The overall proportions and many of the details look a bit like a modernized interpretation of art deco. I do hope the production version stays as true as possible to the concept. My one concern in that regard is if the bonnet/hood line is too low to make room for the expected V8 and V8 hybrid power plants. Maybe it looks lower than it actually is?
WOW!! I'm totally speechless, the flagship of Lexus is going to make Lexus the most advanced car in the world. Forget about the BMW and Mercedes. I do know this is just a concept car. However, I know Lexus would make this beauty at least 85% of the concept car. This is the FUTURE!!! Thank you Lexus for making our life easier
Wow, just look at that profile. I'm bowled over!
"Aggressively elegant" is a perfect way to describe it. Makes the Germans look 10 years old and gay! Expecting to see a production model maybe in New York in April, and the car to hit either late 2016 or early 2017. Well done, Lexus! BD
Great video here by Lexus showing off the design, and new features like "Remote Parking", "Automated Drive" and advancements in vehicle-to-vehicle communications. Now that's Dynamite! https://www.youtube.com/watch?v=m_U_IVxy34k BD
I knew I had a good feeling about the 4 door coupe look... C pillar looks so much like the mule spotted a while back which I posted earlier in the comments. Looks great, but tail lights look a little too Toyota-esque.
I have had my reservations about this debut for some time. The current outgoing LS is dull, as I feel it doesn't really give the head turning impressions a flagship should and I really did NOT want the LS to adopt a fastback rear end. Lexus had to get this right, and THANK GOODNESS THEY DID! THIS THING LOOKS AMAZING! LOOK AT THE BACK SEATS! THIS IS HOW A FLAGSHIP SHOULD LOOK!! 99% of this will make it to production, right?!? The wheels already scream L-finesse. Slap side views on the doors? That's roughly the 1%, RIGHT?!
The grille embodies a mental state of design that explains how same has cascaded into every aspect of the complete product.
Thank you Mr. Akio Toyoda for waking Lexus designers up to be bold and brave - the cars are finally starting to look like world beaters, combine that with high tech like hybrid/hydrogen, legendary reliability and dealer service and you are on to a winner.
So, substantially longer than the LX (LX 199.4 inches vs. this car 208.6 inches) and almost as wide (LX 78 inches versus this car 78.7 inches (LX without mirrors, this car ?) ) as the LX. So when and how will the hydrogen fueling stations be deployed? Given the engineering, I think this concept is "all in" for hydrogen and fuel cell, there won't be an alternative gasoline engine model, correct?
This is absolutely gorgeous. Except for the taillights. If they keep the top half of it it looks pretty good but having taillights extend to the bottom should be left for Concept only. I'm really curious to see what will make it to production. Will the face detecting key be standard? Same would go with the other tech shown, like the hologram type controller? Excited can't wait to see what else the new LS has in store.
Everything looks good, but kinda reminds me of a stretched ILX. But damn, those tail lights though!!!
IT'S SO PRETTY!