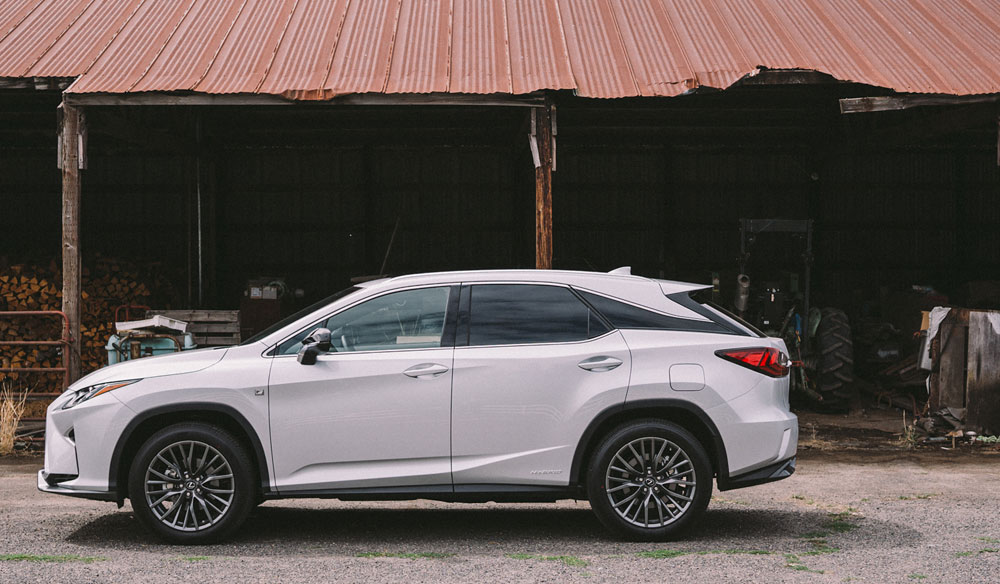 Lexus recently invited me to Portland, Oregon, where I was able to test drive the fourth-generation Lexus RX in all its various forms. The following are my personal impressions from the day of driving, please refer to my technical overview for the full details.

There’s a real risk in messing with success, particularly when it comes to Lexus and its RX crossover. As the top-selling Lexus vehicle since its debut in 1999, this is a model that’s sold over 2.1 million units worldwide. It would have been no surprise if Lexus had dialed down their spindle grille styling and played it safe with an incremental update.

Instead, Lexus went bold. The all-new fourth-generation RX is big and brash, with a design full of hard edges and serious creases. Is it all too much? Has Lexus gone too far? I traveled to Portland, Oregon to find out.

A visual tour of the RX has to start with the front grille — on the RX, the higher “pinch point” of the spindle shape makes the bottom portion bloom out until it almost reaches the corners of the vehicle: 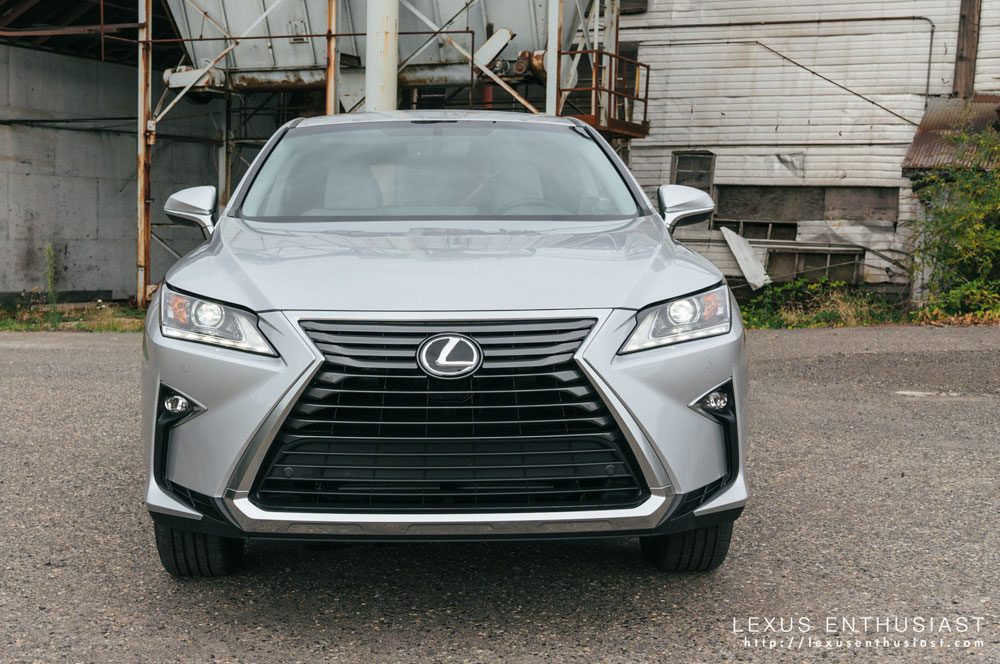 The grille pattern of the standard model resembles a shield, and while more subdued than the F SPORT mesh, it’s by no means a quiet design: 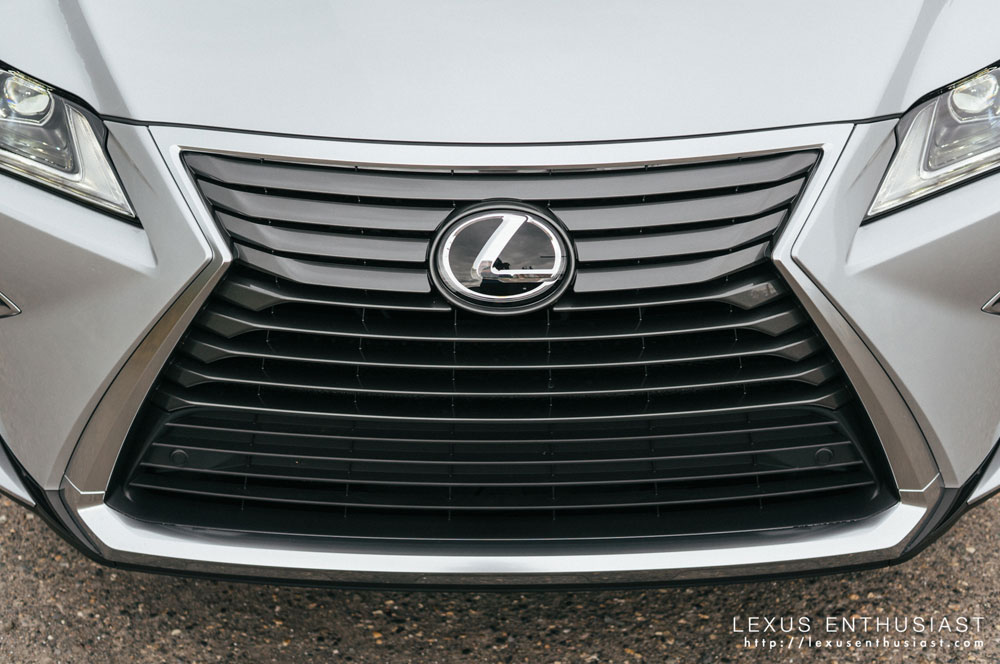 Jump to the side profile and the deep creases continue, with lines that cut through the door handles and intersect with the vehicle shoulder — the smoothness of the previous generation is a distant memory: 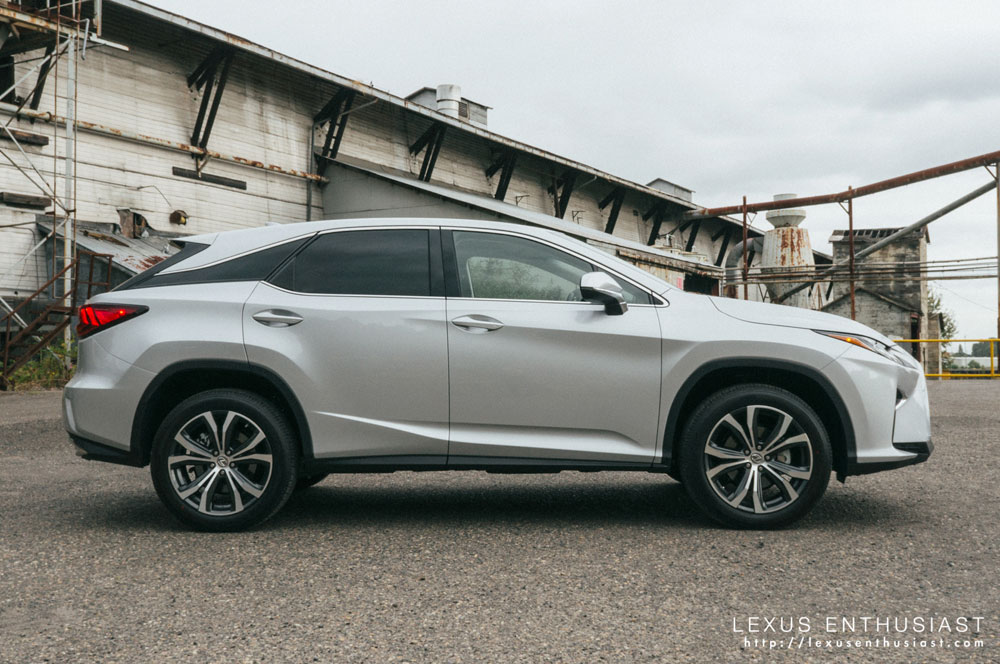 The first third of the side profile is my favorite, it seems impossible that the spindle grille is hidden away in the front folds: 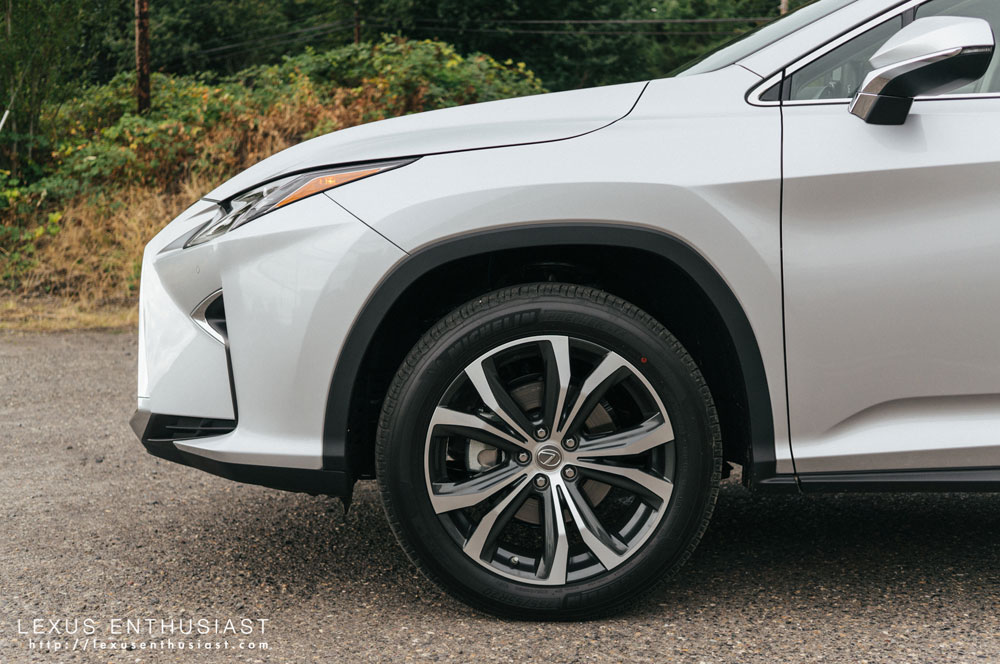 The floating roof that slices through the d-pillar has been a point of contention, but I liked it much more in person: 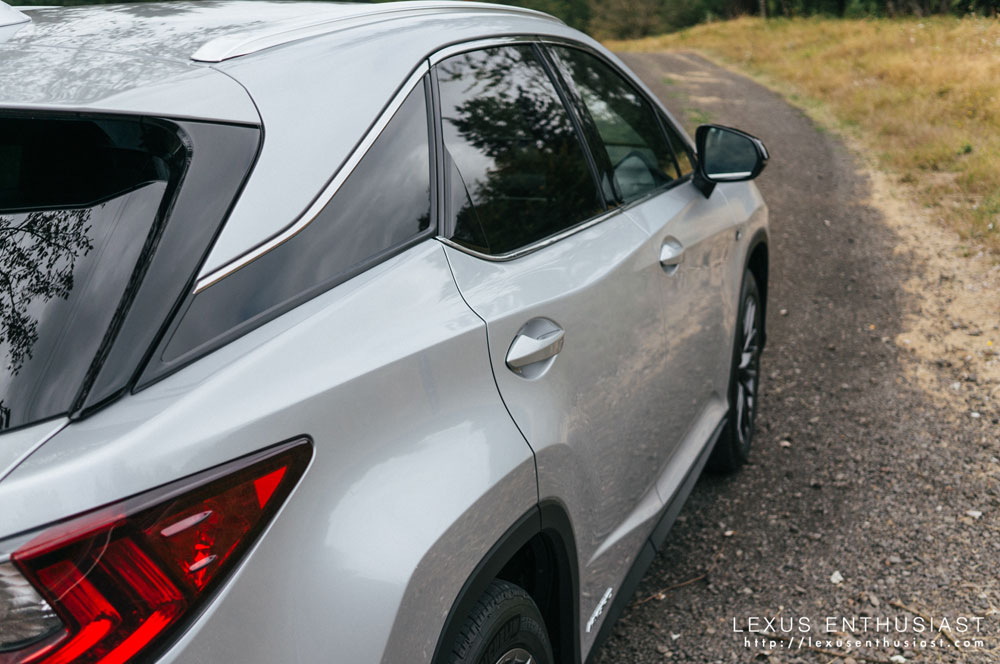 Circle around the back, and the athleticism of the new RX shows through — the rear door and deck have a muscular appearance and toughen up the design considerably: 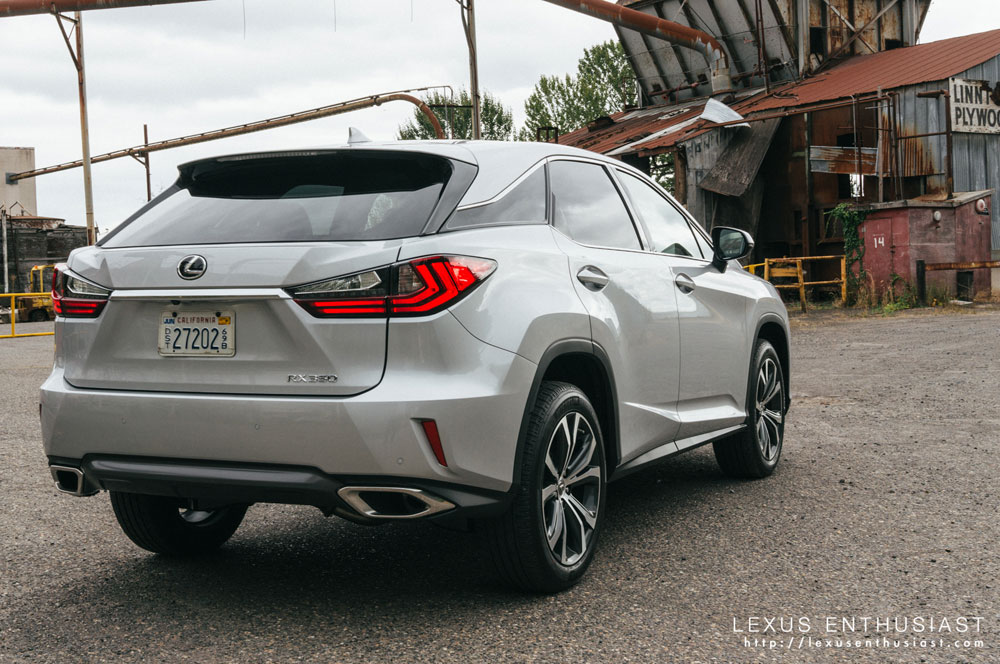 There are a number of details to the exterior that stand out — the entire headlight assembly and the surrounding surfacing, the jeweling of the rear light, the complex shapes built around the fog lights:

New to the RX experience is how the interior has been compartmentalized — there is a distinct difference between driving the vehicle and being a passenger. The new seating position combines with a dashboard and center console that surrounds the driver like the cockpit of a sports car. By contrast, all passenger seating is bright and spacious, bringing to mind an upscale airport lounge more than anything.

The interior materials are a huge upgrade compared to the outgoing model — every single touchpoint has a soft, premium feel, and even the buttons have a satisfying click.

The technology in the RX is impressive without overwhelming the driver — the giant new heads-up display and bird’s eye 3D backup camera are excellent additions, and 12.3″ center display looks much larger in the RX than in other Lexus vehicles. 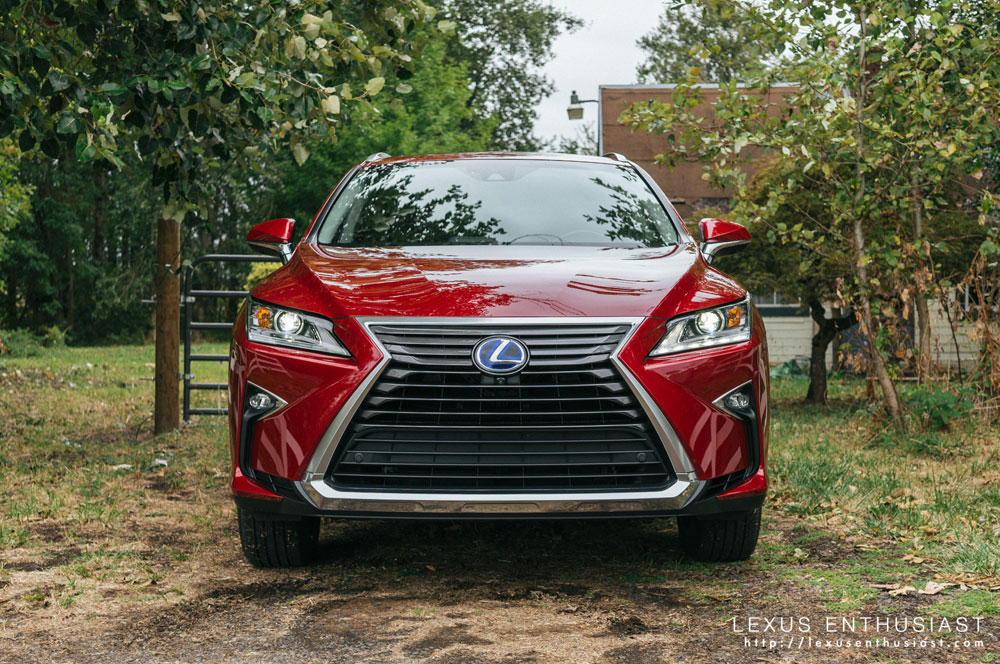 With both the standard RX 350 & RX 450h, I would describe the driving experience as “pleasant”. The RX 450h does feel heavier off the line, despite both models having near-identical 0-60 times to the RX 350, but the hybrid feels stronger during mid-range acceleration.

Steering on the standard RX remains light to the touch, a concession likely made to satisfy current owners uninterested in the new RX F SPORT. 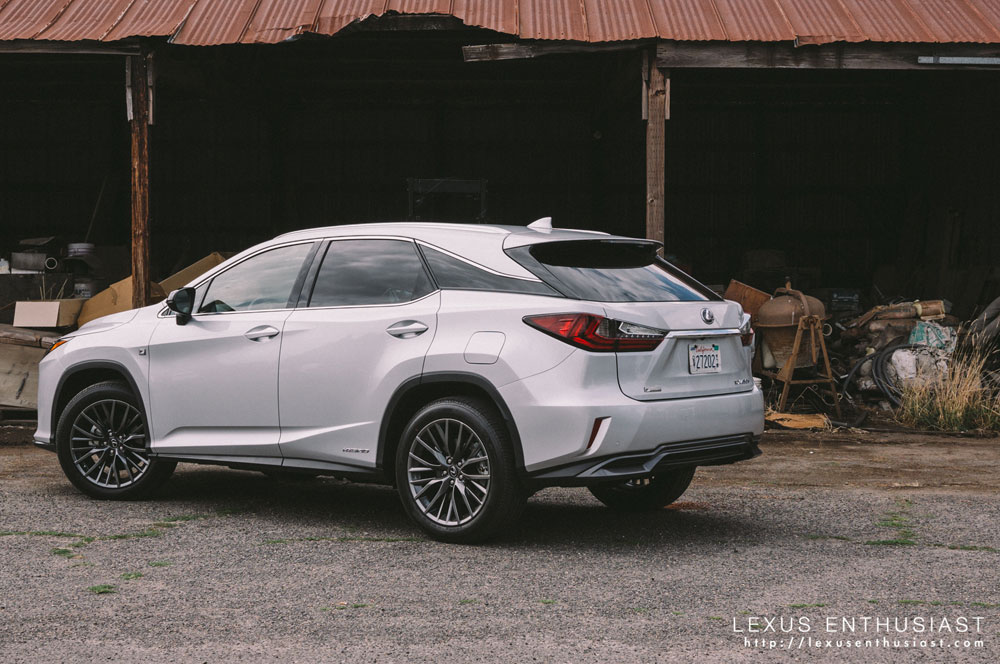 After quick bursts with the standard models, I settled in for a long drive with a RX 450h F SPORT. I immediately noticed the difference. The RX 450h F SPORT is solid — the closest comparison I can make is a feeling much like an expensive swiss watch.

Unlike the previous attempt to bring sportiness to the RX, the 2016 F SPORT package is the real deal — the adaptive variable suspension adds an important splash of character to the crossover. The difference between the various user-selectable drive modes is pronounced and impressive, and would be my pick as the single biggest improvement over the outgoing model.

Driving past hippie communes buried deep in the outer-Portland wilderness, I dialed in the SPORT S+ mode and found myself enjoying the twists and turns of the road. Gone is that familiar floating-on-a-cloud sensation of all previous RX models, but not at the expense of ride comfort. You can almost feel the laser-welding and frame reinforcements doing their job, and the result is a deeper, more meaningful driving experience.

Up until this point, the RX has succeeded through functional design and muted styling. Since the very first generation, it has epitomized the old Lexus and its focus on practicality. Compared, the new RX is a dramatic departure. There’s a real tension between the hard edges of the exterior and the soft surfaces of the interior, and it’s that dynamic balance that really shines through.

In the end, the idea that Lexus took a big risk with the new RX turns out to be a non-issue. The exterior design may be bold, but this is no different than any other new Lexus. The spindle grille and its accompanying design language has been established and seen across the entire lineup.

Chief engineer Katsuda said in his presentation to the media that he wanted to “exceed the RX while remaining an RX”, and I feel confident in saying his team has succeeded. This is a vehicle made special, the core idea is the same but reinterpreted with finesse and freshness.

Really, the only risk with the new RX will be Lexus having enough inventory to satisfy demand.

My thanks to Lexus for their hospitality in Portland, that sure is a drinking town. 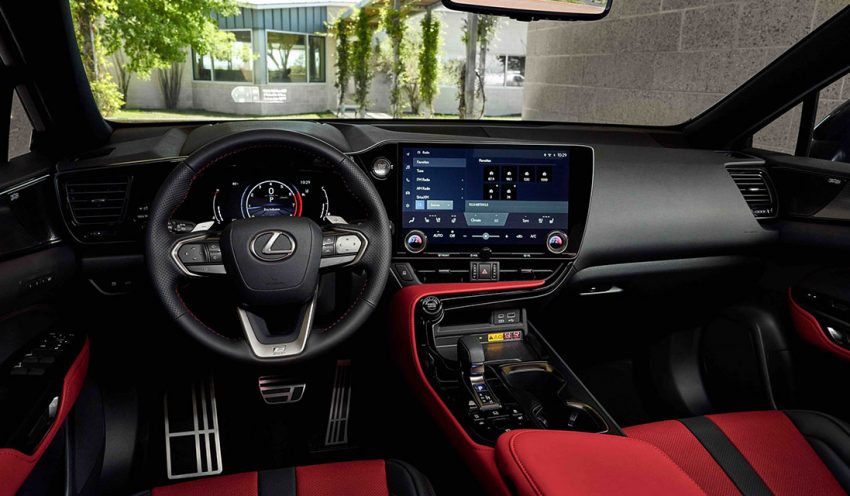 Thanks Krew for the review. I'm glad the new RX drove and looked great in person. I can't wait to see it in person!!
Amazing pictures! Can't wait to see these all over the roads (the floating roof is finally growing on me )
Quick question. I've seen it mentioned that with the power 2nd row seat option there is a button reachable from the drivers seat to fold them. I have been unable to notice that button in any of the photo's I've seen. Any idea of the location?
Hello, Krew. I've read couple of rewiews of this test-drive held in Portland from different journalists. One of them says the base RX comes with a halogene headlamps and both lense-xenon and LED are the options according to the specification introduced during this test-drive. Is that true?
When inside the previous RX, even the NX, you are immediately cushioned by those amazing seats, so comfortable and the car is soooooooo quiet it's embarrassing!!! I hope the have not changed any of that, AT ALL!!!
Thanks for your comprehensive review, you are going far deeper these 5 minutes test drive usually found on many web sites… One question still puzzles me about this new 450h. I own a Gen 3 RX 450h for a few months now and if I am perfectly happy with the high level of comfort and luxury equipment, I am still a bit frustrating by the driving experience. Before this car, I used to drive 6 cylinders, 3 liters turbo diesel engine (BMW 530d and lastly Audi A4 Allroad 3.0 TDI). Those engines are full of torque at very low engine speed, on the Audi, the STronic was shifting to the upper gear as low as 1500rpm, and the acceleration/thrust was already impressive, with nearly no pressure on the accelerator. These cars can be driven on the torque of the engine, and I really like this behavior, giving the impression that the car is reacting with no effort. On the 3RX, if you step gently on the accelerator, you get a gentle acceleration… As you increase the pressure on the accelerator, the engine rpm is almost directly linked to the accelerator course, with an immediate rise. And the acceleration is also linked to the rpm. So the only way to get a decent acceleration is to strongly push the accelerator, resulting in high engine speed. And even if the sound of the 6 cylinders is very nice, I still have the impression at this time that the engine strains. Of course, if you go full throttle, the thrust is almost immediate and the acceleration is really amazing for a 2.2 ton vehicle, but this is not my daily driving style… I feel this behavior appropriate in a sport car, but not in line with the spirit of the RX. If you look at the overall power available in the electric motors, I would have think that the immediate torque provided by these motors should have been more noticeable, even for low accelerator solicitation. I already test drive pure electric cars and the immediate thrust is impressive, even with much less powerful engine than the RX. I drove recently CT200h and NX300h and I found them more demonstrative than my 3RX when driven quietly. Has these aspect been improved on the RX4 450h, do you feel more torque at low rpm ? I read somewhere that Lexus said they increased the electric motors response, but I haven’t found a single word on it in any test drive report. Sorry for my English, this is not my native language, I am writing from the other side of the Atlantic Ocean…
Great review, Kevin... and amazing pics. These are the most "real life" pics I've seen as most of the others are either Lexus' press pics or overly processed. Nice job providing the perspective that only a true Lexus Enthusiast can
Well, outside of the exterior styling, the new RX seems pretty good from all the launch reviews I've read. The new styling though.... I love it, but I wonder how the white belt/blue rinse set of current RX owners will respond. In an ultra hot segment, this looks like a winner to me.
Very well-written post, Kevin! I'm in love with the new RX.
Need that release date ???
Obviously they haven't improved the navigation system. Had to whip out the trusty ol' Garmin eh Kevin
Was it designed by Will.I.Am(the untalented joke) and Homer Simposon(remember the "Homer"?) together? Because it looks just horrible. And there are no big impovements to the hybrid system, which puts Lexus behind almost everybody else in that respect. To bad Lexus isnt the car for me anymore. I really regret that.