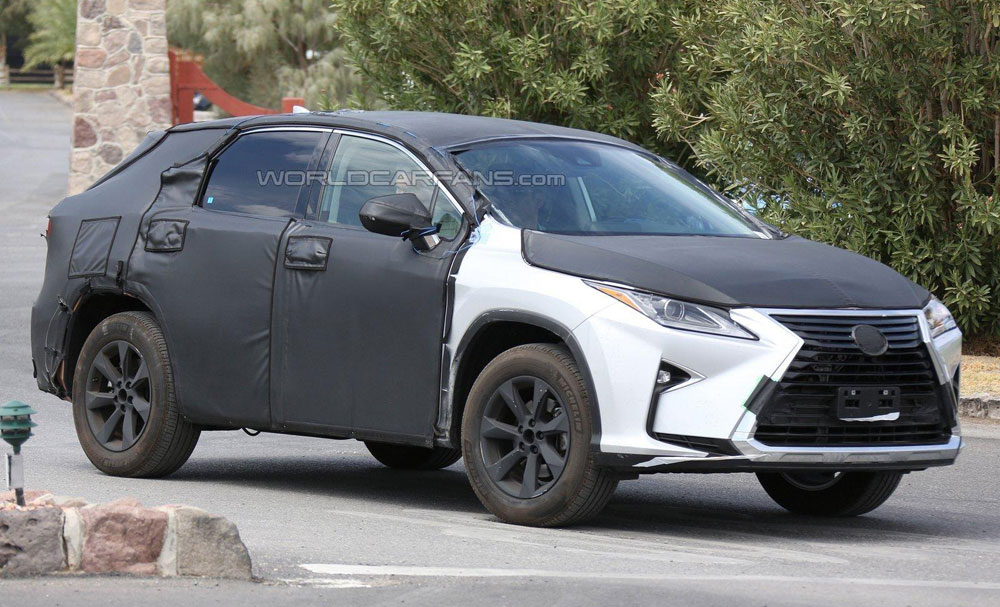 The unusual Lexus RX prototype has been spotted again, this time with less camouflage — here are some photos from World Car Fans:

Logic would suggest this prototype is an early look at a seven-seat three-row version of the new RX — the rear third of the vehicle is covered completely, including the rear window. There’s obviously something hiding back there.

My attempt to measure this prototype against the existing model was unsuccessful, but even so, differences in size appear to be minor. Is there really enough room back there for a third row?

(Be sure to check out World Car Fans for more photos of the RX prototype.)

It also doesn't look like they're using the original front blinker design, and a single yellow incandescent light bulb. I really really hope they do use the LED design.
The only way they can fit a third row in there is to move the 2nd row forward. There's tonnes of legroom in the 2nd row so moving that whole bench forward could create space for a third row. Even then, only kids will fit
Rear wheel drive Lexus TX with third row seats needed, case closed.
3 row RX is simply bad, because this would mean no 3 row TX, and TX should be RWD.
If they can fit 3 row in the nissan rogue, I'm sure it can be done in the RX ( for emergency purposes) given the new one is longer than the current Rx.
It looks like the prototype at the car show New York that was a four seater
Since the silhouette looks exactly the same as the "normal" RX, why would they cover up the outside if they're just adding a third row?