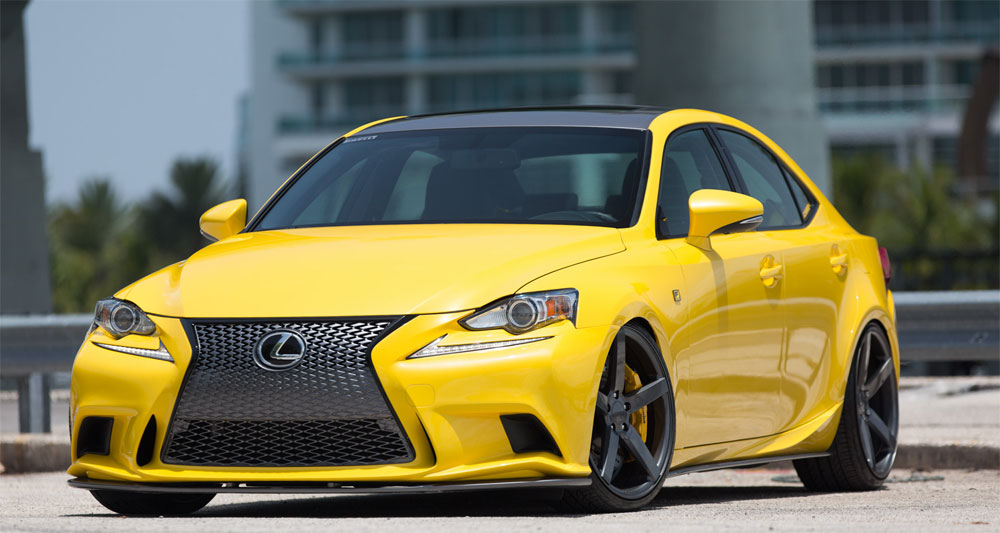 Vossen Wheels have just released new photos and videos of their modified Lexus IS F SPORT in LFA yellow, and Lexus Enthusiast forum administrator and Vossen marketing director Mike Forsythe is featured front-and-center for his role in the build:

The IS F SPORT was painted by the folks at Platinum Motorsport, outfitted with new Vossen CV3-R wheels and Brembo brakes, and finished off with the Lexon Exclusive carbon fiber kit and exhaust.

Mike also wrote about the build process over at the Vossen Blog:

I have been a Lexus owner for 19 years, which in retrospect is older than most of the users on Instagram! I remember going to shows in a modified Lexus in the late 1990s. I remember being one of the first people to organize and create Lexus-centric meets back in Atlanta in the early 2000s—while modifying a Lexus was still in its infancy.

I wanted to draw some past/future relationships with our build, from the first generation IS 300 (offered in “Solar Yellow”) to the Lexus LFA, which was a bold and distinct exotic car that changed the direction of the company. I wanted the car to really pop with the new “Spindle Grille” and bold, aggressive body lines. It came down to Audi’s “Nardo Grey” and Lexus’ “LFA Pearl Yellow”. At this point the team entrusted me to take creative control of this build—or maybe they just gave in to my never-ending pressure!

(I’ve known Mike for a long time, and it’s no exaggeration to say this build was a labour of love for him. Working with Lexus officially was a huge moment for him, and he should be very proud of the end result.)

What a sick set of wheels, Mike. Thanks for making my wheel decision so much more difficult. CV3-R in graphite is so clean.
Should've put ISF stacked exhaust to fool people
Very nice car, very nice guy! Great work buddy!
Although I am an Alfa Romeo fan and really like the new Alfa Romeo Giulia QV with manual, the sporty interior and all the Ferrari know-how it has, the Lexus IS is still the most special looking car in this segment, which historically Alfa Romeo has usually been from a design point. The IS needs a F version with twinturbo V6.
What a fantastic looking IS! I can't wait to see those "super" plans come together
The headlights and shark fin rear reflectors has got to go for the facelift.
That rear valance is my favorite part.