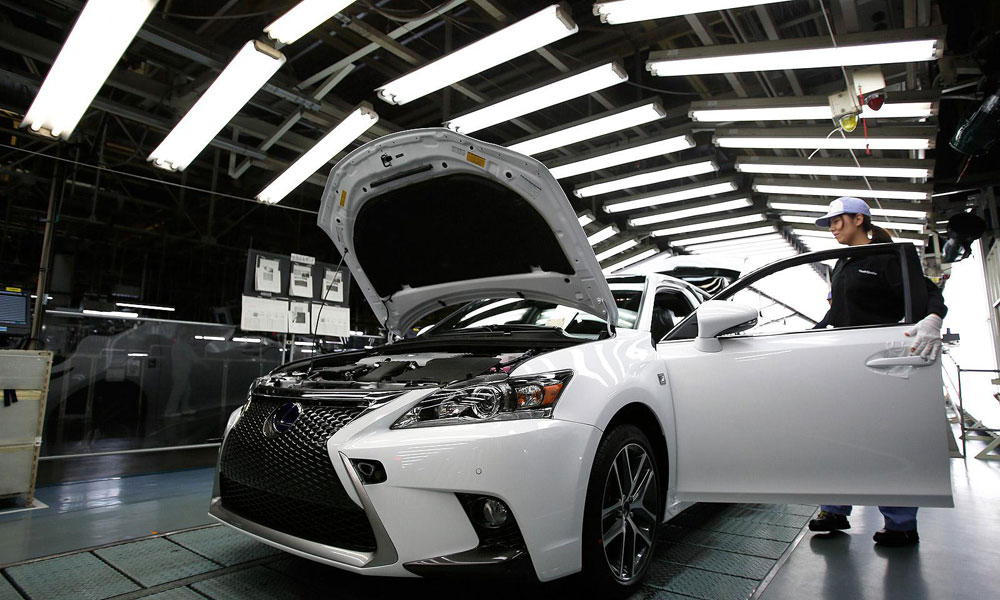 Toyota announced a massive restructuring of its vehicle manufacturing strategy today as part of the company’s switch to a new modular development platform.

The expectation is that the process overhaul will reduce the resources necessary for new models by 20% and bring a staggering 40% savings in the cost of new factories.

Automotive News has a very detailed breakdown of the changes, including some new product news:

A new generation of engines will be up to 25 percent more fuel efficient than those in today’s Toyota vehicles while generating 15 percent more power, the company added. The company’s next-generation hybrid drivetrain, to debut on the redesigned Prius as early as year-end, will deliver a 15 percent boost in fuel economy.

Toyota executive vice president R&D Mitsuhisa] Kato, in an update on the plans, said the first cars based on the Toyota New Global Architecture, or TNGA, will be C-segment, front-wheel-drive models debuting later this year. The family of cars includes the Prius hybrid, Corolla and Lexus CT.

Kato said savings in time and money will be plowed back into new technologies, better manufacturing processes, slicker designs and more attention to detail and quality.

“The aim is not just cost reduction,” Kato said. “It is making better cars.”

Read the Automotive News Story and the Toyota Press Release

Toyota has done an amazing job with platform sharing while differentiating its products. To take on Audi and Jaguar, Lexus should try incorporating carbon fiber for easy to manufacture and invulnerable body parts, even on the lower-end models! Blank buttons for base models should at least be solved with a nonexistent button rather than a fake one! Besides the LS, Lexus should also produce another model with an entirely clean sheet. I am certain that hybrids can be packaged even better. This model does not have to be a sedan or hatch. It can even be an SUV!
Slightly concerned about this sentence: "in a major change, Toyota also will use more components designed, engineered and manufactured to global standards instead of proprietary Toyota specifications". I fear that this will lead to a downgrade in quality. Anyways, this was just a matter of time. Even small brands such as Volvo Cars has its SPA technology to propel them forwards. The major downside with it is when something does occur it will take a certain amount of time to sort out. Apply that to Toyota and its reputation will be under consideration. Such a thing must be thwarted at any cost.
The Toyota Production System is a bit slow to react to problems that are likely shared with many models, but I feel that it is easily solvable; I am pretty sure Toyota already did. Sharing parts is supposed to help solve problems more quickly. Of course, should there be a problem, the scale would be tremendous, and news channels love another fear mongering report.
At the end of the day, from a consumer standpoint, it's the product (and price) that count and if this new manufacturing process results in improved quality (and implied reliability), fuel economy, and tech, it's a win for us! Did anyone catch the note about the the C-segment cars debuting later this year, with the mention of the CT alongside the Prius (and Corolla)? Can we be possibly looking at the next gen CT as early as MY 2016??? That makes the current gen on a 5-year run which is typically 1 year short of the Lexus minimum run, so I'm skeptical but wishful.
Mazda has adopted this strategy and it delivers good result. Skyactive is the code name for Mazda. All its lineup receive improved transmissions, better body structure (lighter yet stronger), impressive exterior design, and better engine performance which leads to improved fuel mileage. Mazda sales worldwide hit all time record. The same thing could happen to Toyota and Lexus. With TNGA, we could expect better products from Toyota corp. Next week, All new RX will be announced. Could RX be the first Lexus model that adopts TNGA? If RX turns out not to be the first TNGA, the next generation LS will certainly take the first spot. That's just my opinion.
Even though that there has been an overall increase around the world in sales of hybrid cars here in Europe especially in Czech Republic it is not considered to be so effective as in other countries. For example from my personal experience husband of my sister really likes Mercedes and he went to try out the new S-class. He aked them about the hybrid engine and they said that it is not the engine he would like to have in his future car. I am not really suprised with this since Mercedes does not really know how to make hybrids compared to Lexus.