END_OF_DOCUMENT_TOKEN_TO_BE_REPLACED " /> Interview with Lexus GS F Chief Engineer Yukihiko Yaguchi | Lexus Enthusiast
Menu
Log in
Register
You are using an out of date browser. It may not display this or other websites correctly.
You should upgrade or use an alternative browser. 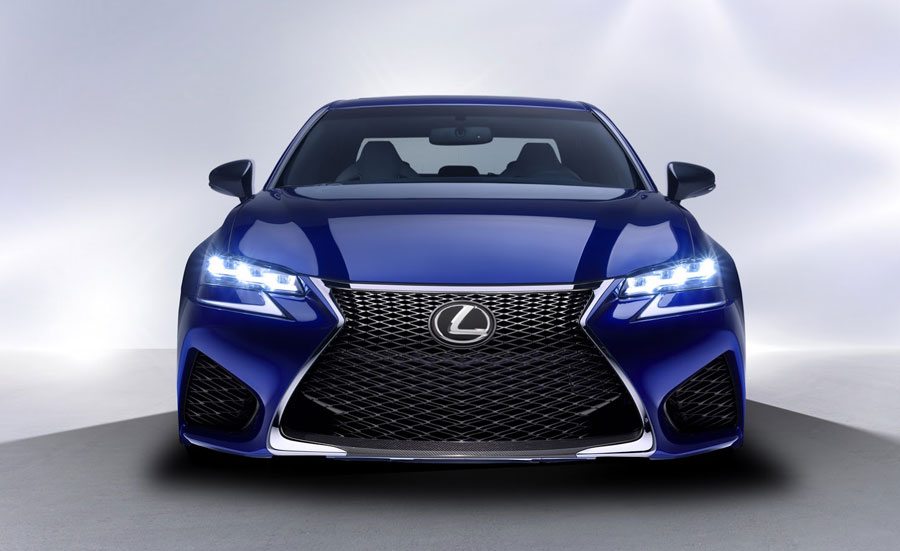 In advance of the Lexus GS F’s debut at the Detroit Auto Show this week, Automobile Magazine has an interview with chief engineer Yukihiko Yaguchi answering one of the bigger questions about the new super-sedan:

Automobile: Was there any thought given to increasing power given that the Lexus GS F is bigger and heavier than the RC F, or are you confident it will perform with sedans in the similar class?

Yaguchi-san: The cars’ performance is almost the same so I want customers to choose which they like: sedan or coupe between RC F and GS F, as that is a matter of taste. The GS F will offer a Lexus F brand performance experience with a focus on fun and an easy-to-drive experience, while balancing its street and track character.

There’s definitely been some concern in the enthusiast community about the GS F using the very same 467-horsepower V8 engine from the RC F, especially when the competition is the 560-hp BMW M5 and 577-hp Mercedes E63.

On the flip side, the full picture has yet to be revealed — little is known about the GS F besides its engine. Pricing will have a significant impact on perception, and there’s more to performance than horsepower (though a 100+ horsepower gap against its competitors makes for a significant handicap.)

There’s some other small details in the Yaguchi-san interview worth pointing out:

A: The F performance brand is now been expanded to two main line models. How much further would you like to expand it?

Y: We don’t have future plans yet that we can share, but the F brand is a key part of Lexus globally going forward.

A: Is there a desire or need to create another halo type vehicle along the lines of the Lexus LFA as an ultimate expression of the F performance brand?

Y: The Lexus RC F-based race car will take that responsibility instead. The RC F GT3 story will evolve in the coming year to help become an ultimate expression of F brand globally.

We know things can change over time but nice to see for "F" cars the starting point will be a V-8 according to Yaguchi San.
Still, a bit disappointing that it lacks some power. It should be on par with its competition in that area. But I guess that that is the Lexus Way. They do it in their own way fully aware of its competitors. Slowly progressing. I do however expect a quantam leap [in all tech areas] fully ready to take the lead. With this, we're still the challenger.
This should have been an IS-F (or an RC-F sedan). Lexus should have held off on the GS-F for a few years. GS-F has a very long wheelbase. It will not feel as tossable and as nimble as the RC-F. It will feel like a much bigger car.

The GS chassis is fantastic the car already drives like it is smaller. A revised suspension, TVD, huge brakes, Better tires and 161 more hp will surely make it handle fantastically.

That picture... Wow. Naturally aspirated V8 is HUGE win! Great fuel economy? Even better! But that lack of power does hurt...
Sounds like Lexus didnt get the budget approved for the development of a new (or modified) engine... This is what makes lexus always feel like 5 years behind all the bavarians. Great reliability and now great handling but still so behind in craftmanship and engines... everyone is excited about the naturally aspirated engines with the atkinson cycle but in reality we need turbos.... not in SUVs... in sedans and coupes. I recently bought an IS250 fsport for myself and a beetle turbo for my wife... lets just say Im more excited about the weekends driving her beetle than my lame slow lexusturtle. Nothing worse than riding (and purchasing) a car that looks fast and feels slow.

What are you talking about? The engine in the RC-F is infinitely better than than the M4 engine. It is a true masterpiece It is heavily reworked compared to the IS-F V8 It is just as efficient as the other cars in the class. It also revs 500 rpm higher than the IS-F engine and has much stronger torque at high rpms. M4 engine is based on a 335i 3.0 Liter turbo engine. It sounds terrible, has unpredictable power delivery being turbo and completely runs out of breath at high rpms. RC-F V8 is much more responsive and sound million times better.
You are so right! Those germans... Just makes me sick... WHO says they are the benchmark? Lexus is all about the whole experience, enjoyment... Drivning 15000 Miles (european not english) and always passing by those BMWs, smiling when they try to compete with my gs 450h :) gona smile even more in my new rc f...
Just Look at how BMW has built the "Ultimate Driving Machine". This BMW M4 has such an unpredictable hard-to-modulate throttle response that a poor M4 owner lost control of his car just going down an empty straight road LOL : https://www.youtube.com/watch?v=miA5qj5ergM
Lexus is behind Germans in engine craftmanship? HA lay off the drugs. German engines dont last no where as long as Lexus engine and need much more maintenance. More power doesn't mean a better built engine.
The Germans know how to play the game...most of their buyers will just lease their cars for a given period of time. It only matter that they "last" for the duration of the lease. And unfortunately, that is what most luxury owners or Euro car enthusiasts care about, in which the badge matters more to them. Different strokes I suppose.
No, we dont need or want turbos.
@Algaro seriously? sometimes people have to understand a car isn't created for them alone; if it was we would be walking and still riding on horses. Lexus isn't behind in anything. especially craftsmanship. CUV are out selling cars day by day. Turbos are overrated; yes they boost horsepower and fuel economy but can be trouble some if isn't done right. Lexus do things perfectly if it isn't perfect then they don't bother. Yes horsepower is lacking for the class. But that's all everyone sees; they don't see anything else. You complaining about the IS250 being slow; but yet you went out and bought it don't smack Lexus smack yourself; why didn't you go ahead and get the 350 are something else. Lexus don't do turbo are superchargers yes they have the engines to get even 700HP but they don't do it because HP doesn't mean your car is going to be any more fun than say a 400hp car. Fanboys or Enthusiasts are just cheerleaders; they only know numbers but don't understand what the heck is going on. i completely understand that we all like Lexus and want everycar numbers to out match the other cars. But i became a Lexus fan because i been around Lexus cars my whole life i understand their concept and creation of automobile.
Right.... all this talk and lexus general manager just reported they will start putting the turbo engines in multiple vehicles starting this year... I guess I cant be thaaaaat far off. Lexus usually is behind in innovation, they put reliability on top of wow effect without proving it. I bought the is250 based on the reviews that came out calling it sophisticated handling and obviously due to the reliability. Lets get this straight. Ive owned 2 GS (400 and 430) two SC (400 and 430) one RX330 two LX (470 and 570) and now i decided to try their smaller IS vehicle. I like it, i like everything about it, except the engine. Im a lexus enthusiast, thats why Im posting on this blog, I just wish Lexus wouldnt be lacking in power... you have to admit they could do much better in that aspect. Just sayin...

Disappointing that they couldn't add more power in the engine. They should've have just made a new IS F instead. Because the engine numbers would be more suited. Having said, that can give lexus more time to use the 540hp in the RCF-GT3 concept and apply it in the GS F. This is how the timeline should've happened for the upcoming releases from lexus in my opinion: Detriot: The IS F (instead of the GS F) & the concept or production ready next gen RX Chicago: A face lifted GS along with concept of LS New York: RX (if concept was not released in Detroit) and maybe a new lexus model (I.e TX) Then later on in the year or maybe next year lexus releases the GS F along with the LS F. GS F at this time because the face lift of the model can give the GS better interior features.
That picture is awesome. That front end means business
On the Lexus usa website, it says that the GS F will hit 60 in a "mere 4.4 seconds"
On the Lexus usa website, it states that the GS F will hit 60 in a mere 4.4 seconds
Well after reading that interview will now focus my attention on first like for the new GSF, i love the fact that hood/bonnet does not have bulge like the RC F. which is a good thing for the high performance sedan.
I'm so glad Lexus has the good sense and maturity to not engage in a horsepower war with the Germans. A car like this should be all about how engaging and rewarding it is to drive,not how well it would do in a game of Top Trumps.

Me to lol i trust in lexus. when everybody else is so imature, you know only lexus will not pay them the attention. if this car whip their bums lol they will regret having so much power in their cars
I would be happier if Lexus left the engaging and rewarding part in... and added a little bit of more power. Lets be honest..a 2006 Acura RSX had a specific engine output of (nonaspirated) of 108.5hp per liter, meanwhile the newly released GSF engine has a 93.4hp per liter. The lexus lfa produced 115.1 hp/L the Audi RS5 (nonaspirated) produces 108.1 hp/L.... Craftmanship... yea they make reliable engines... but when will they make reliable engines while raising the bar (and not costing >300K LFA). Thats what i call a real pursuit of perfection.

He just evaded the questions with indirect answers. *sigh
I just would like to remind everyone that AMG/M etc was not built in a day. It took them decades to get to where they are today. The funny thing is a lot of the original German M/AMG guys don't like the new cars. Different strokes for different folks. Remember AMG started with one car, M only had a couple and it took awhile to where they are today. I for one am very enthusiast that in a short time we have gotten a solid F-sport program and a growing F one. It is not for everyone, it surely is not for the HP junkie but I do think Lexus will easily sell the 1600 or so GS F's they plan to sell in the states.
Lexus 'F' mission statement. "To arrive, whenever possible, at all magazine group tests comprehensively under-cocked" This is so true from one of the best auto-journos.