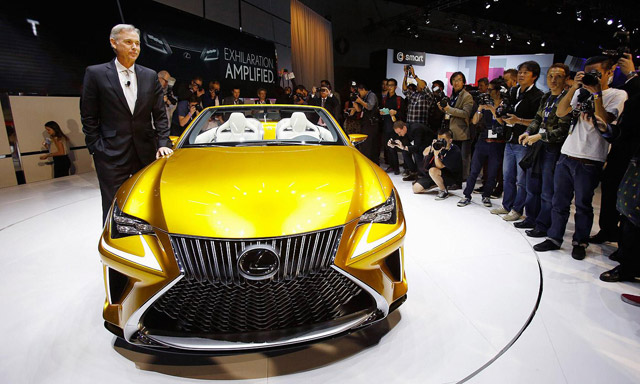 In a speech to the Automotive Press Association, Lexus USA general manager Jeff Bracken suggested that two new models could be revealed at the Detroit Auto Show — from the Detroit Free Press:

The growth plans for Lexus are focused on performance and high-end vehicles, including the global debut of a performance vehicle in January at the North American International Auto Show, said Jeff Bracken, general manager of Toyota’s luxury brand.

Bracken would not provide further details of the performance vehicle, but did say it could be one of two vehicles to bow at the NAIAS.

Earlier this year, both Motor Trend & Autocar reported that a GS F high performance sedan would be built in 2015 — this could be the model that Bracken is hinting at, though a production LF-LC coupe is also a remote possibility.

There’s no shortage of possibilities for the second model, though it does seem unlikely that Lexus would debut two completely different vehicles at the same auto show. Perhaps it will be the standard version of whatever performance vehicle is introduced?

I guess they are the facelifted GS and the GS F.
Facelifted GS will arrive in the second half of the year. Almost same time as the new RX (production will start in Oct. 2015).
Could be the IS200t that's in the shoot for next year or so. Probably the GS F as the main. Wild guess could be the introduction of an FS model.
Facelifted GS and IS 200t (yawn....)