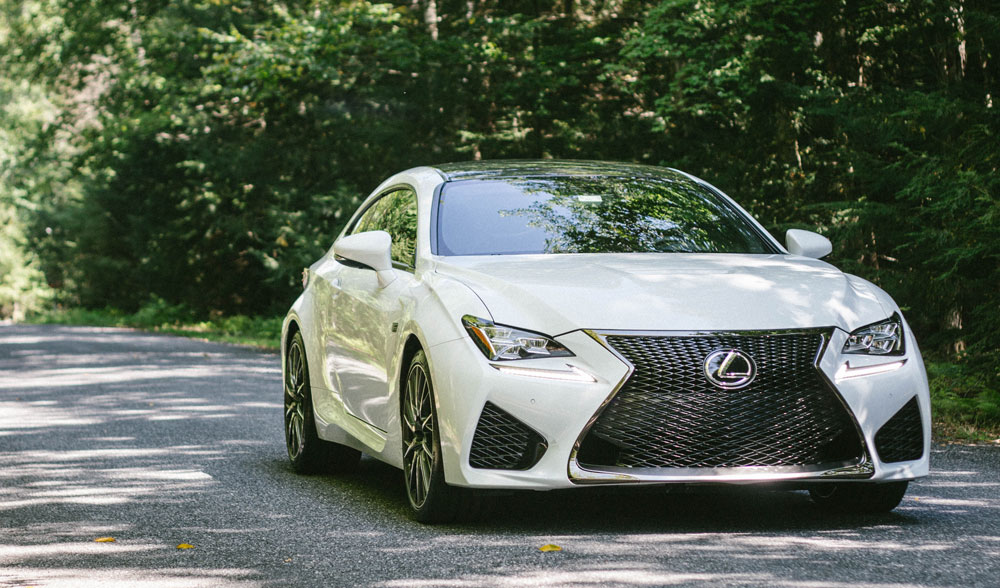 Two weeks ago, Lexus invited me to the Monticello Motor Club in Upstate New York, where I was able to test drive the all-new RC coupe in all its various forms. I posted a technical overview of the new model last week, and now it’s time for some personal impressions.

The Sound. The sound is everything.

There is nothing like the combined engine & exhaust note of the new Lexus RC F. It’s a pure massive monster sound that resonates through the cabin, that rumbles in the seats and in the core of your chest.

I fell in love at first rev, and that love colors my entire opinion of the new super-coupe.

Two weeks ago, I spent the day with a variety of RC coupes in upstate New York. By design, our hotel was two hours away from our primary destination, the Monticello Motor Club track, and this gave us plenty of time to get used to the new Lexus coupe.

My driving partner Ben Hsu and I started off in an RC F in Ultra White, equipped with the carbon fiber roof and rear spoiler. The RC F spindle grille is something else, like a razor too sharp to touch: 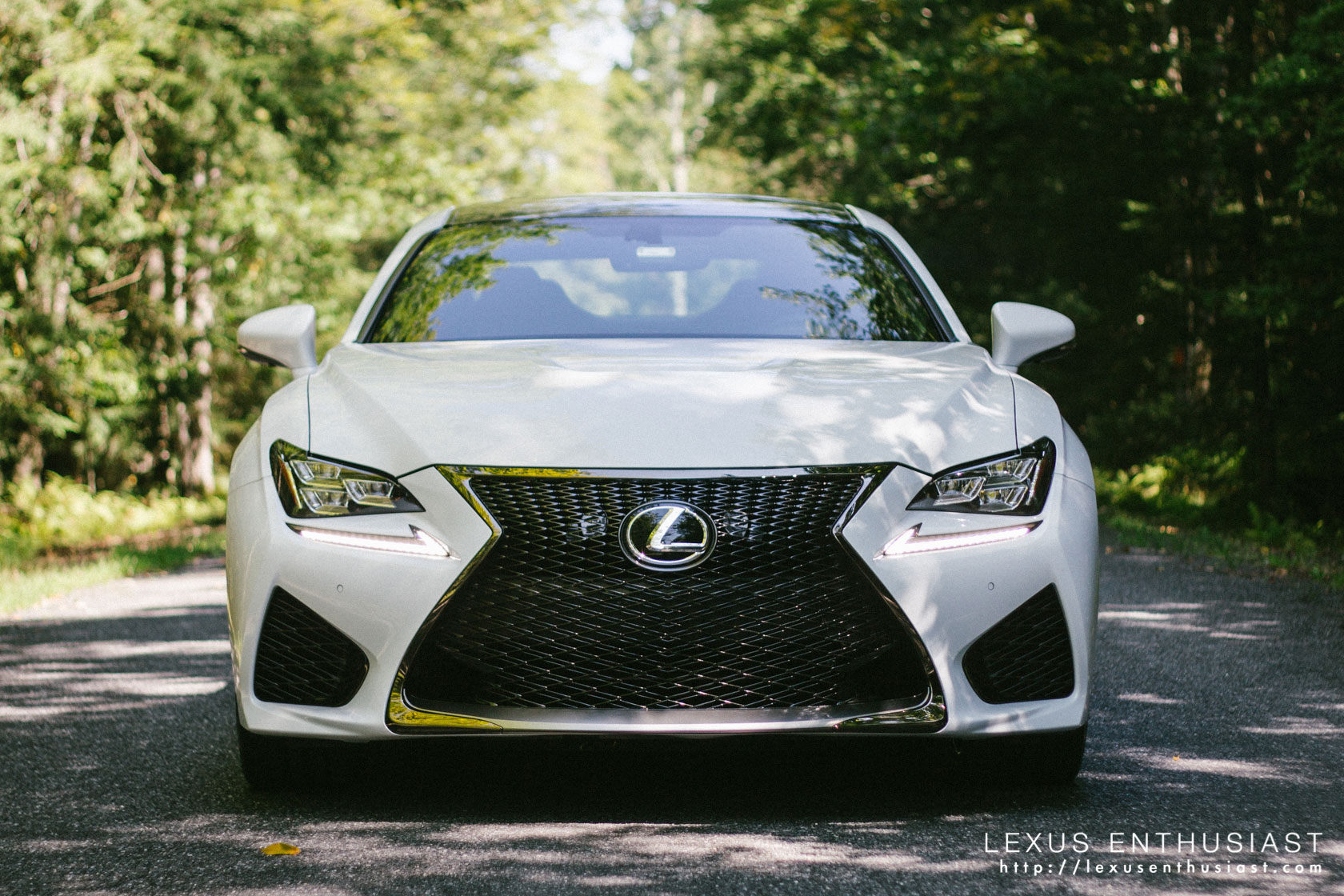 The triple-L headlights are amazing — disappointed they will only be available on the RC F and not the standard RC: 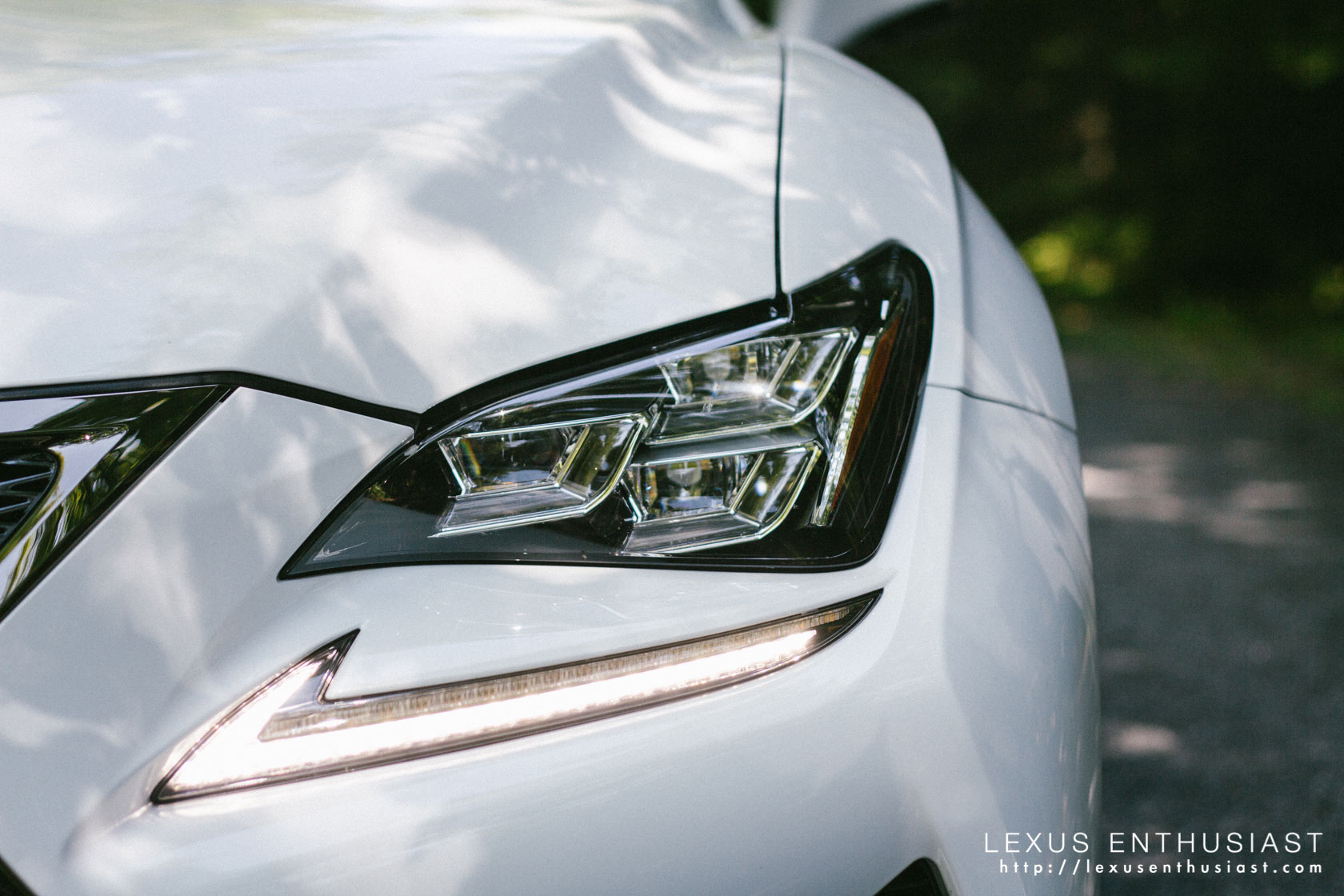 There’s a cohesiveness to the RC F that was always missing with the IS F — it’s brawny and sculpted and unapologetically aggressive: 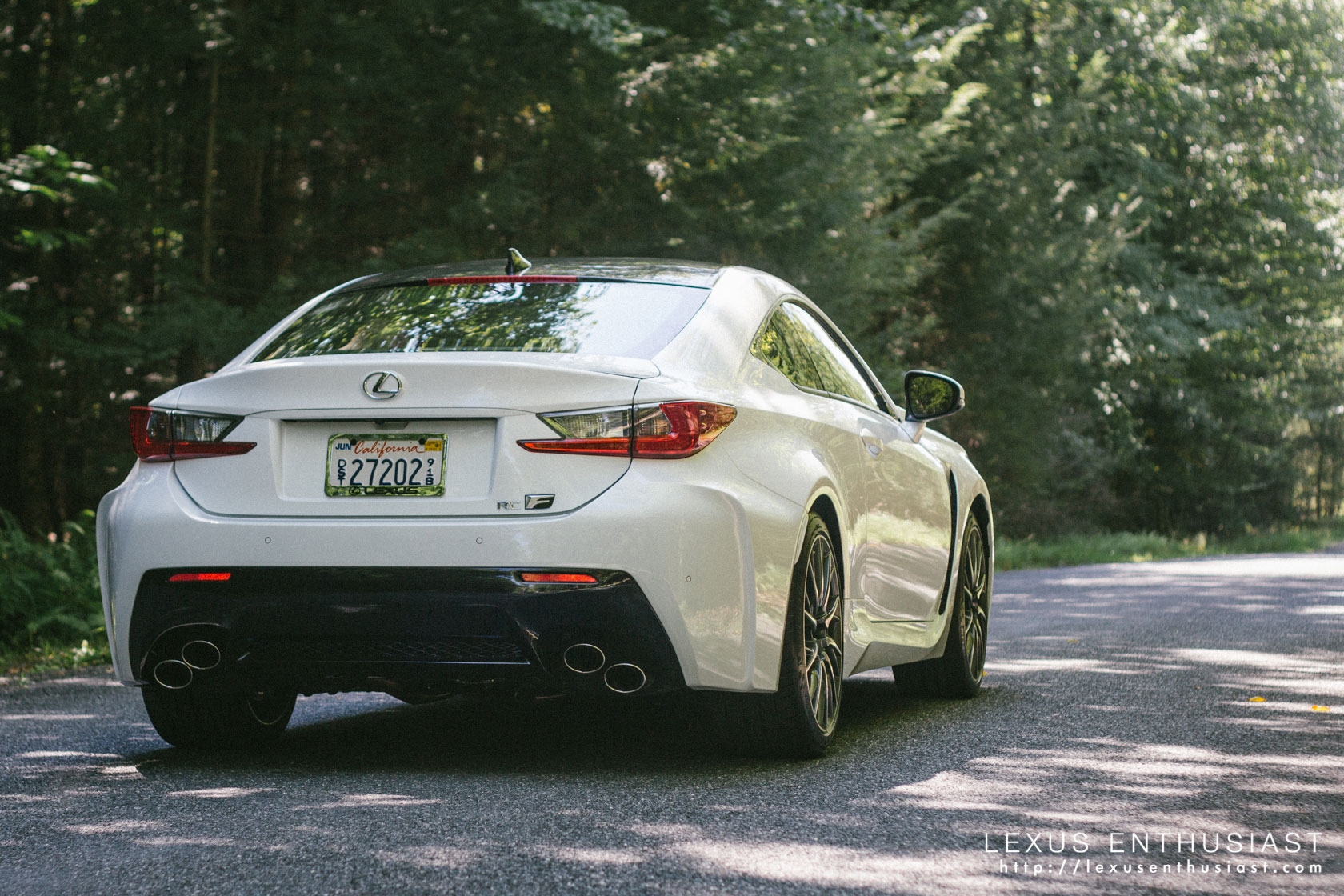 All RCs have the same air of confidence that I saw with the NX — both are the first truly new Lexus models to be introduced since the debut of the spindle grille, and it shows in the boldness of the overall design.

There are so many great exterior details:

On public roads, the RC F is like a wolf in a business suit — quick to bark & growl, eager to run free, but civilized and predictable enough to make regular day-to-day driving stress free.

As to be expected with a high-performance car, the suspension can be jarring on rough roads, but highway driving is smooth and comfortable.

Inside, the cabin is a riff on the IS sedan: 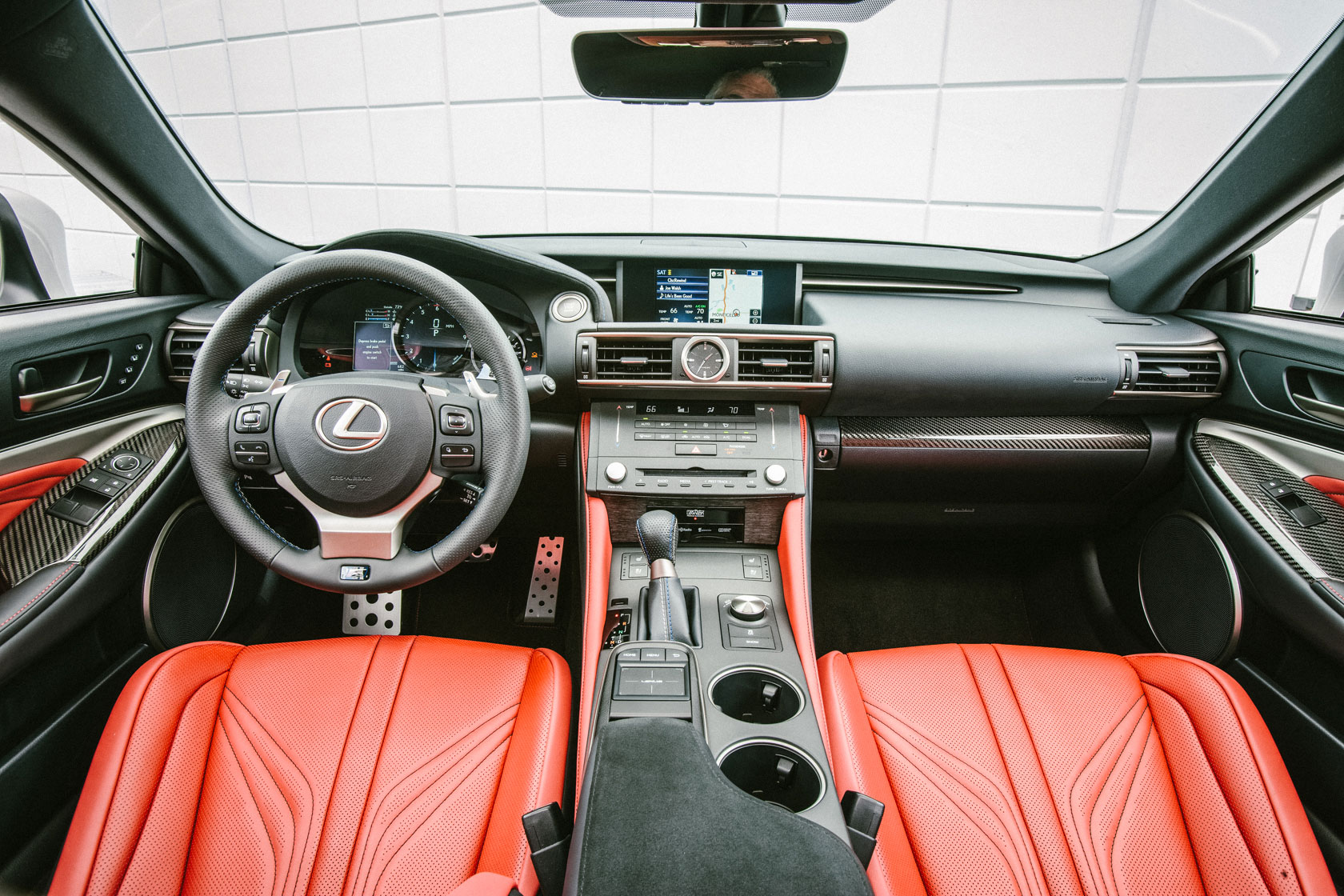 There’s some nice interior touches, with suede-like trim along the doors and above the instrument panel. The stars of the show are the two front seats, which fit like a glove: 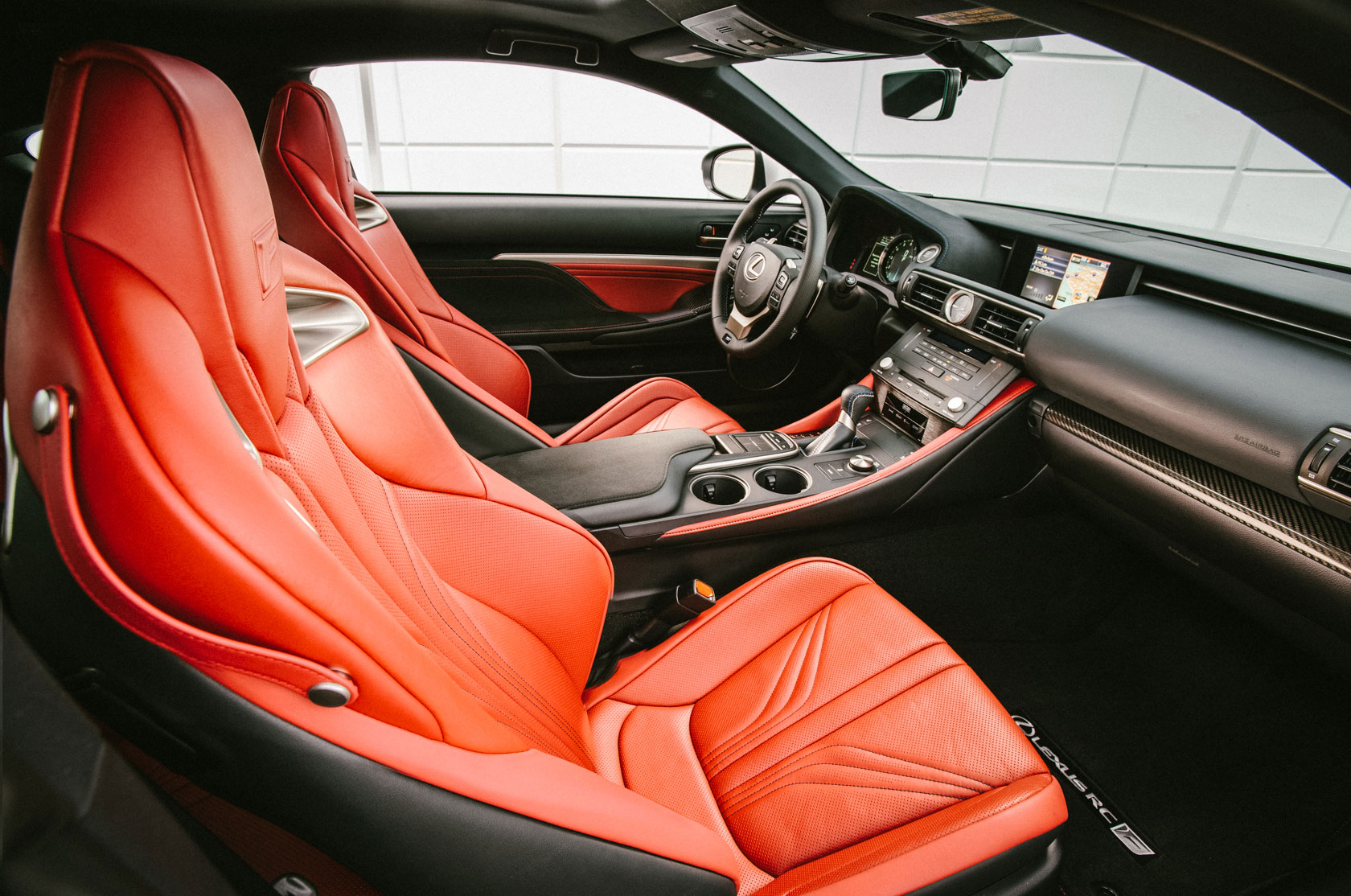 I learned something right quick about the Monticello Motor Club track — it’s brutal hard. 18 turns, incredibly late apexes, a dramatic corkscrew right in the middle of the track, it makes for a very difficult course. 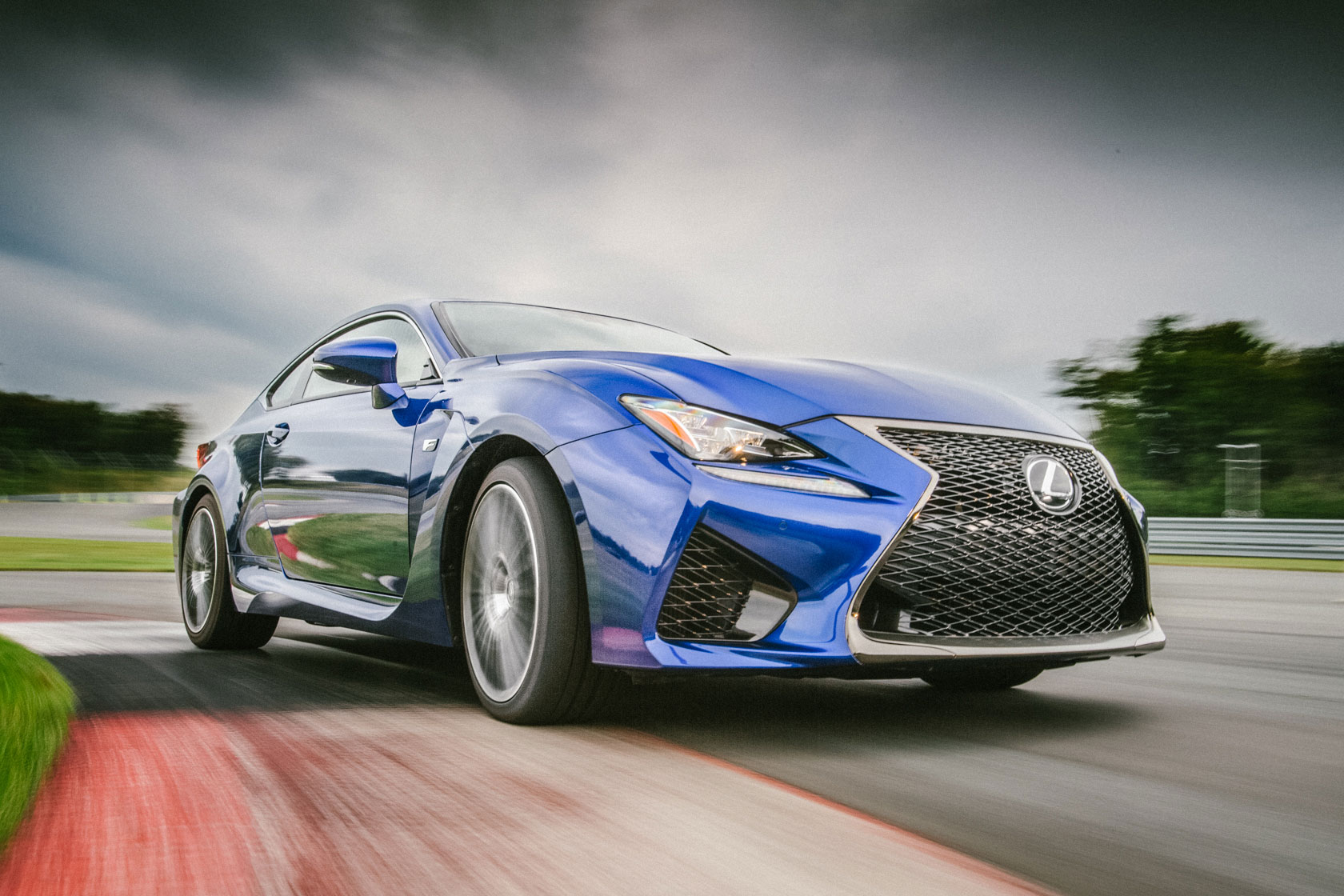 I am not a professional race car driver, nor someone that spends a lot of time on the track beating the crap out of cars. I have never overheated a transmission, or rotated perfectly through a corner. I love driving fast, but I’m not very good at it.

In short, I am the perfect candidate for the RC F. I pulled off moves at Montecello that I had no business even attempting. The RC F augments a driver’s ability, instilling a serious confidence while ensuring there’s a safety net when necessary.

This is the core of the Lexus performance experience, which chief engineer Yukihiko Yaguchi has described as “fun to drive”. It sounds simplistic, but there’s no better way to explain the feeling.

I’m not surprised by all the talk about the RC F’s weight and 0-60 times and how it stacks up to competitors numerically — it’s the easiest way to judge one car against another.

But where automotive journalists have complained about the weight of the RC F, I found it reassuringly solid. The RC F may be fractions of a second slower to 60mph compared to the BMW M4 or this or that, but at no point did I want to go faster.

It’s all about an individual’s frame of reference.

What I do know is that the RC F is different. It represents a new chapter for Lexus, one that starts with the confidence to do things their own way. The RC F will lead to a whole new generation of Lexus enthusiasts, and that’s exciting, because this is a car that deserves the attention. 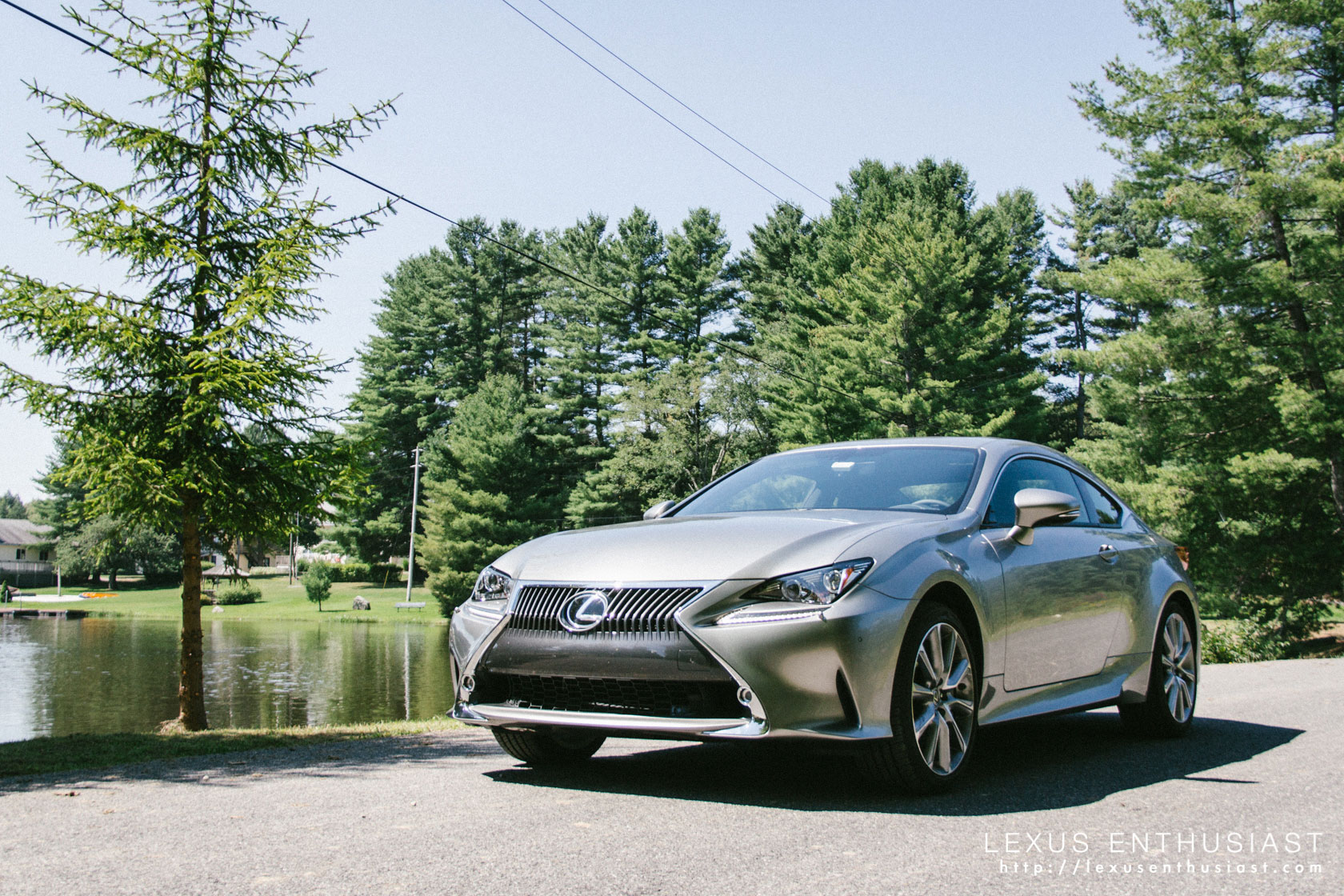 As balanced as I tried to be, spending a lot of time in the standard RC was difficult with the distraction of the RC F everywhere I looked.

Still, I’m happy that I broke off from the track and took a Atomic Silver RC out for a drive, because it was the biggest surprise of the day.

Let’s face it, the RC 350 has been in the public eye for nearly a year, and visually it comes off a little sedate when compared to the RC F SPORT and RC F. It’s also easy to write off the car with its well-worn 306 horsepower V6 engine and lack of sports tuning.

Don’t make the same mistake I did — the RC 350 is a blast. It has a different personality than the other two variants, more calculated and buttoned up, but it’s not just a two-door sedan. 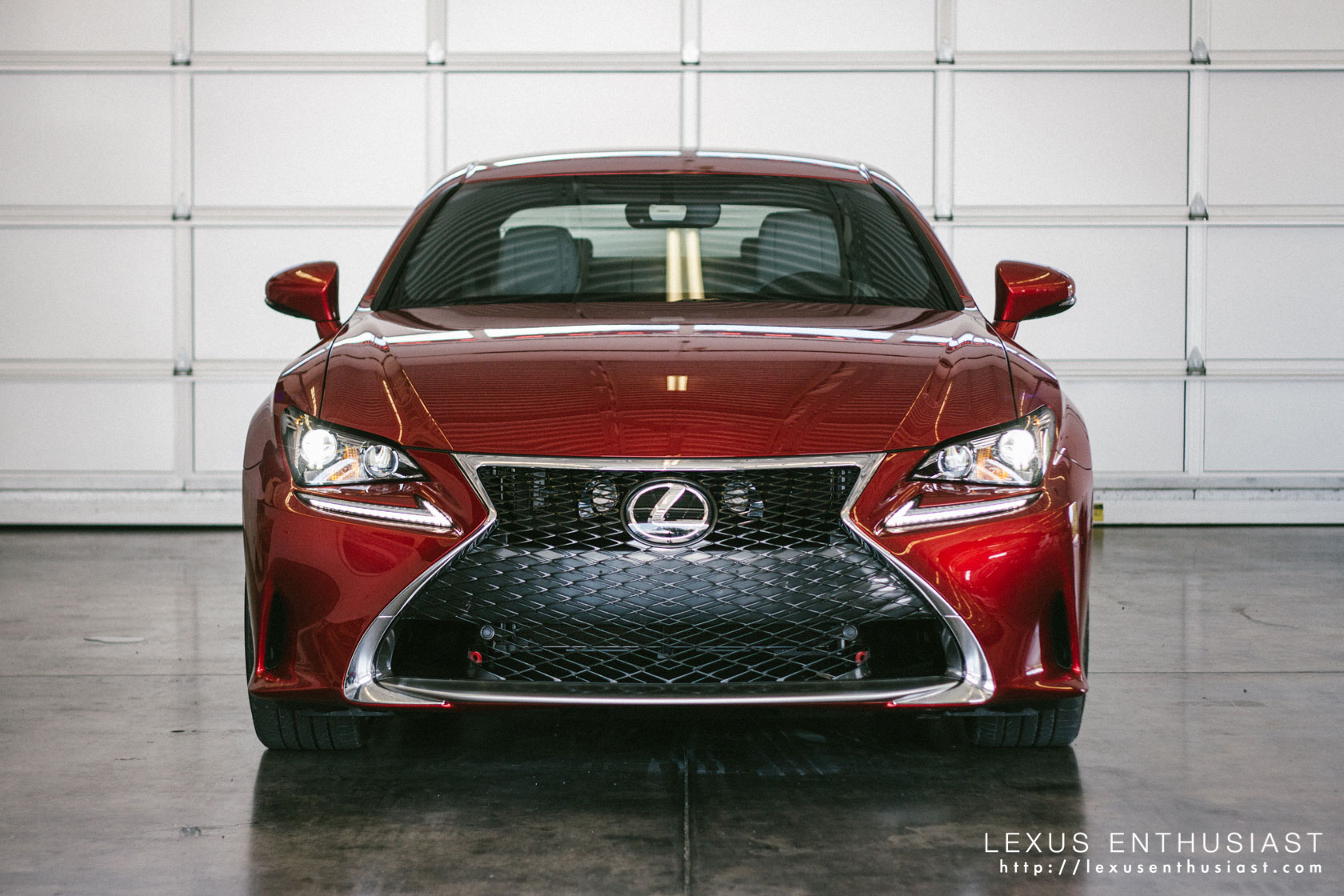 The very last vehicle of the day was the RC 350 F SPORT in Infrared.

After a full day on the track and running all over the place, I was exhausted. Driving the RC F SPORT was a matter of checking the box to say that I did it.

But the strangest thing happened — I couldn’t stop chirping the tires. Accelerating from a stop, pulling a u-turn, it all resulted in squeals from the rear wheels.

And then what started off as an accident became a game, and then a serious sport. Before I knew it, I was having so much fun I almost missed the bus ride back to the hotel.

I look back now and see how neatly it fits into the idea of getting out after a hard day of work and having fun on the drive home, but that’s what happened.

And that wraps up my initial impressions of the 2015 RC. I’m sure you have questions, so leave a comment and I’ll do my best to answer.

My special thanks to Lexus for the invitation and their hospitality during my trip to New York. All photos without a Lexus Enthusiast watermark were provided by Lexus.

can't wait to experience this car
Thank you Krew! What a great review. I've been such a verbal critic of the RC's styling, particularly the RC 350 front fascia. But, the pictures you took . . . I found myself being really taken with this car. The picture of the RC 350 in my favorite color Atomic Silver pried me open to admit that the car is something special. The Ultra White RC F is beautiful! I'm thinking just now, I can't believe I'm writing these words . . . me being such a spindle grille critic. And your words describing feelings driving these cars made me feel like I was behind the wheel savoring the fun. Pardon my language, but you've written one hell of a review! I'm convinced. Now I just wish I could afford one.
Love the shots. Tempting.... Triple L LED lights only on the RC F? Which market? Based on the Canadian eBrochure, the standard RC with the Executive package had these lights "Premium LED headlights".

Yeah, once again the US is getting gipped! Come on Lexus!

Definitely buying this car next year. I really hope they launch an exact RC-F with 4 doors and I would be all over it.
I hate how the bottom part of the rear-lights looks like a fat sausage. They should have kept the design of the lights from the LF-GH(where it originates) and kept it flush With the metal. What they did in the RC is over-designing it, and it looks bad.

Apparently the protruding rear lights has much to do with aerodynamics. The NX is similar while even with Toyota products like the Rav4.
I was actually talking about only the red bottom part of the lights. The part that looks like a fat bent sausage.

Why not a powerful Hybrid, Lexus?!!

Drivetrain from the GS 450h would fit this car.
I agree. It also adds another option for those that want a hybrid but also want a fun coupe to drive.

I cant wait to drive these cars along with the new NX! I have a training event coming on the 28th in Kentucky at a track :) Great read Krew
Now thats an outstanding review!
That car looks amazing and a blast to drive. From what I have been reading so far about the RC F vs M4 comparison this is how I would summarize: The M4 is the captain of the football team, gets straight A's and dates the head cheer leader. The RC F sits in the back of the room is loved by everyone and when the M4 is home doing his homework the RC F is doing you know what to his girlfriend.

Mr. Krew, I felt every single moment of your experiment ... I'm so excited ... XD