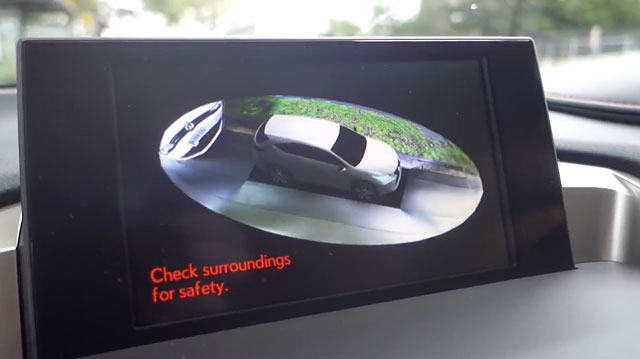 While unavailable in North America, the Lexus NX will have an available 360° panoramic view monitor in some markets around the world — here’s a quick demonstration of the system in action:

The camera system works with four high-definition cameras in each corner of the vehicle, giving a full overview of the surroundings — very cool technology.

I was going to get an NX until I found out this and the panaramic roof weren't going to make it to North America. Apparently price was the reason for this decision. I would have paid it. Maybe next year.

They're also saving such equipment for the RX's late 2015 US launch, but are making a mistake in my opinion.
Price is not an issue. Here in eu cost the panoramatic roof half of standard moon roof. I'm sure there will be some safety homologation reasons behind...
Well, a Lexus US rep told me it price was the reason they didn't bring over. I just purchased a different vehicle with a pano roof (and 360 camera) so I'm quite sure safety is not the reason...

Quite unfortunately true, as many of their US detractors will easily nitpick at this in comparison to competitors. The LS removed APGS, yet the W222 S-Class, LCi F01 7er, and D4 A8 implemented this years after Lexus did in 2006. I do not understand why Lexus doesn't even offer such gizmos. The LS and GS don't even have 360 cameras, yet some try to argue that the former is "best-in-class"(outside of W222). Infiniti/Nissan created this technology for Around View Monitor in 2006, yet Lexus could not bother making use of similar tech existing in the 2008 LX570? Why it even took 7 years to fully replicate that for the NX, I can only wonder.
agreed. It doesn't have to be included. But I certainly would like to have the option. Doesn't make sense. I was shocked when the new IS came out that the f sport blue wasn't coming to the US but it is Canada... What?

This is more than certainly being made to accommodate the USM 2016 RX (AL20/30?), with this feature. Here in UK, we drive and pay more for smaller vehicles on average than the US. I wonder why one hasn't seen actual prototypes by now, it already been a year since the first RX200t mules were spotted.
It's unfortunate this is N/A in N.A !
why are we talking about this? a feature has been used in much cheaper cars for years!!! Lexus is seriously lacking and behind at this point in terms of technology and in car entertainment features!
I love Lexus, but this year I went with MB GL550. For the very reason you guys just posted. On top of lacking features it takes Lexus 8 freaking years to release next LX.
This has just arrived in New Zealand as well. Had a play while sitting in the showroom's yard: http://youtu.be/oLCbNax_MIw
Why cannot this be optional? A great safety feature. also HuD.