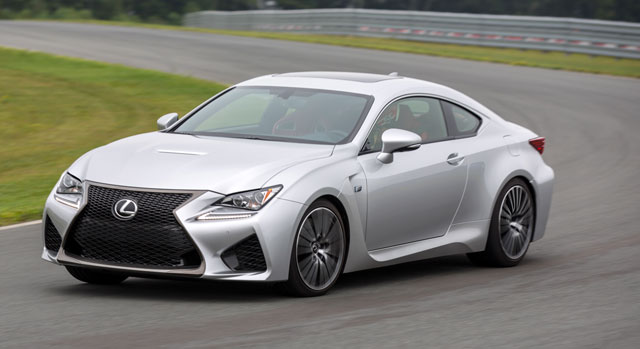 We weighed the RC F and it clocks in at a lardy 4040 pounds. For some comparison, the similarly sized and totally targeted BMW M4 weighs 3604 pounds, a 436-pound difference. Before you mount an angry letter-writing campaign against Lexus, know that the AWD Audi RS 5 is just 13 pounds lighter than the RC F, 4027 pounds.

Frankly, the more than 400-pound weight difference between the RC F and the M4 is enough to tip things in favor of the BMW. But the RC F, at the very least, is a compelling alternative. Exactly how compelling we’ll have to find out at a later date when we compare them directly. Until then, I want you to understand that I enjoyed the new Lexus Frankencoupe much more than the numbers would lead you to believe. You probably will, too.

@krew did you read the review at autoblog of the RCF. Lexus created a masterpiece, it all im going to say
Guys here is a RCF review worth reading. http://www.autoblog.com/2014/09/05/2015-lexus-rc-f-first-drive-review/

T J Keon of Autobytel reviews the RC F. He loves it! At one point (you have to see this 3:42) his mouth drops open out of sheer amazement at how the car is performing. At 5:35 he says: "And one thing I thought I'd never be saying: 'Oh my God, this Lexus is fun!'" Enjoy: https://www.youtube.com/watch?v=K9PdFPKD6GM&list=UUjXhevg8Suyzl7GQrZAvzuA
Motor Trend always hates the beautiful spindle grille of Lexus.
motortrend's was probably the least flattering, but I don't think Lexus intended this car to match every statistic of the competition. they wanted to create an emotionally connected drivers car, and I believe they had. if anything the sacrifice for added curb weight probably benefited the car's touring appeal
Lieberman sucks at performance tests, Lago is WAY better and would probably get better times. Kind of disappointed that the RC F is 3960 lbs, but a head to head comparison is needed to see how it stacks up against the champ, M4.
i've watched autocars review and i agree with suticliff, the weight and brakes need to be improved people on autocar has also commented on how much of a hypocrite suticliff is in the written review by slating the N/A engine but some months before slating the M4 for going turbo car and driver did place it ahead of the RS5 and so did top gear

Jonny is not my favorite reviewer, but his points are valid. 2 tons makes your more of a M6 GT car than a M4 sports car. That much weight is not appreciated in this class, unless you are bringing over 500 HP. BD
Guys, here's the news. At Monticello, Lexus detuned the prototype cars to prevent stand still burnouts...I know...incredible. They also DID NOT have the latest engine management software, and the newest is expected to shave tenths off of the numbers. Why on earth they gave the media these restricted cars is beyond me.