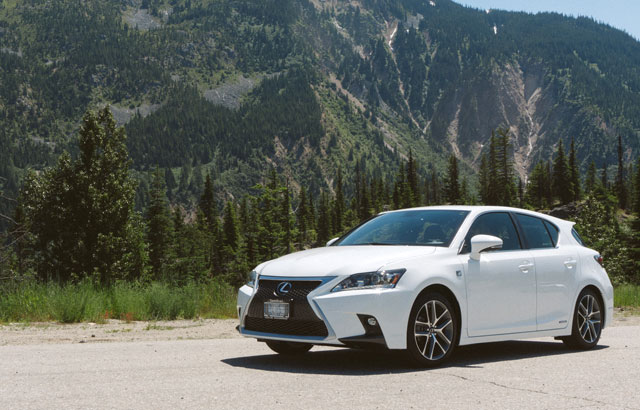 This summer, in partnership with OpenRoad Lexus in Richmond, BC, my wife Karissa and I drove across North America in our brand new Lexus CT 200h.

The timing was interesting — we had originally planned to take a relaxing drive through Canada and the USA, but some unexpected events occurred and we need to be back in Ontario sooner than later.

Wait, what? $270 to drive cross-country? How is that even possible?

Karissa and I landed at the Vancouver International Airport the day before picking up the CT, mostly to get our bearings and avoid compressing too much into one day.

This was my third visit to British Columbia in less than three months — I had done my Western Canada dealership tour in May, and had travelled back to attend the NX press event in Whistler.

My growing familiarity with the area meant a very specific goal for our single night in Vancouver: eat at Japadog, a local food cart that offers bizarro Japanese-inspired hotdogs. I had the Tonkatsu deep fried pork cutlet, and Karissa had the signature Terimayo hotdog: 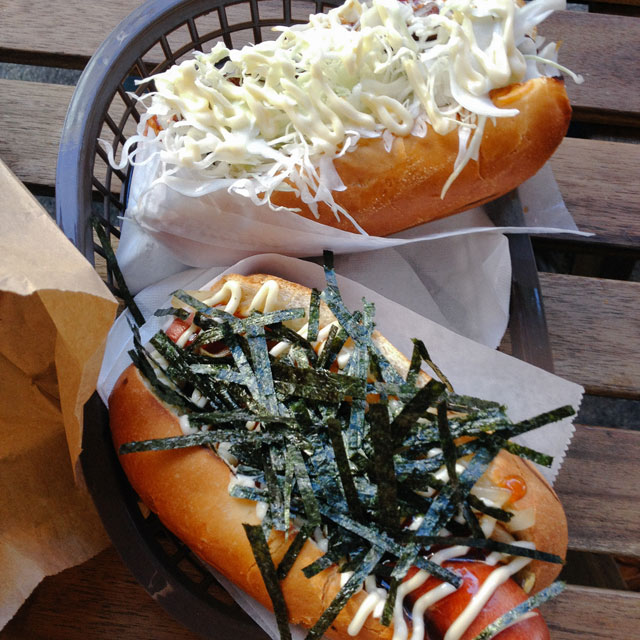 Wrapping up the night with a quick stop for a Swiss Army knife (hate travelling without one), we headed back to the hotel and prepared ourselves for the days ahead.

Day 2: Picking up the CT, Driving to Golden

Excitement was high the next morning when OpenRoad assistant sales manager Amy Li picked us up for the quick drive over to the dealership.

It worth pointing a few things about OpenRoad — the entire experience was exceptional, from the initial partnership discussions right through to signing the final papers. I have huge respect for the entire dealership team, and have to personally thank Amy Li, general manager Jeremy Schaab, and business manager Sarena Yung for their expert assistance.

Over the years, I’ve photographed plenty of vehicles in the delivery area, but this was the first time with my very own car. As you would expect, the CT F SPORT was absolutely spotless: 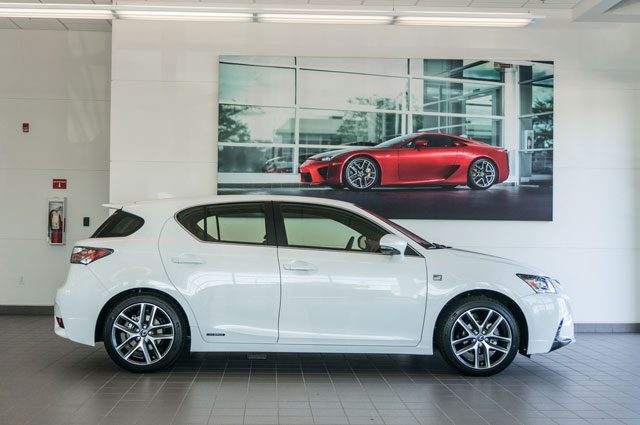 The CT had 18km (11 miles) on the odometer and a full tank of gas when we left the dealership, and admittedly, leaving Vancouver on our way into the Canadian Rockies was a blur.

Seven hours later, we pulled into the Glacier Mountaineer Lodge in Kicking Horse and finished our first day on the road.

There’s nothing quite like waking up in a mountain lodge, especially during the off-season — Karissa and I sat on our balcony to enjoy the view, feeling like the only people in the entire world: 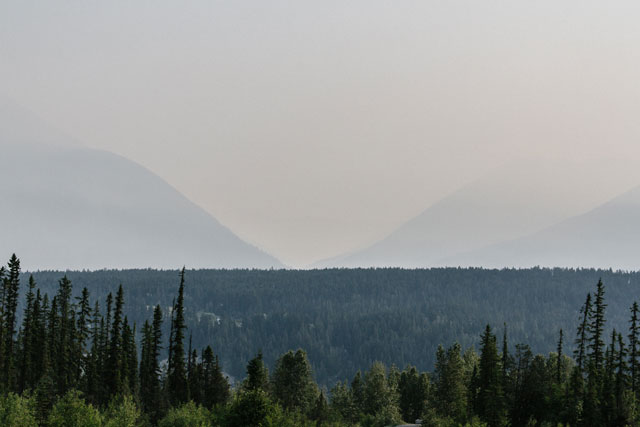 With the CT all packed up, we headed onto the Trans-Canada Highway for the most beautiful driving portion of our trip — the highway curves through a number of Canadian National Parks, and there’s really no way to describe the majesty of the mountains. No photo could ever do it justice.

Reaching Calgary, we made our way to Lexus of Royal Oak for the CT’s 1,200km inspection. The service team moved with real efficiency — by the time Karissa and I finished our lunch with dealer principal Todd Richardson, we were back on the road in almost no time at all.

The rest of the day stayed uneventful, save for a stop at the world’s largest teepee: 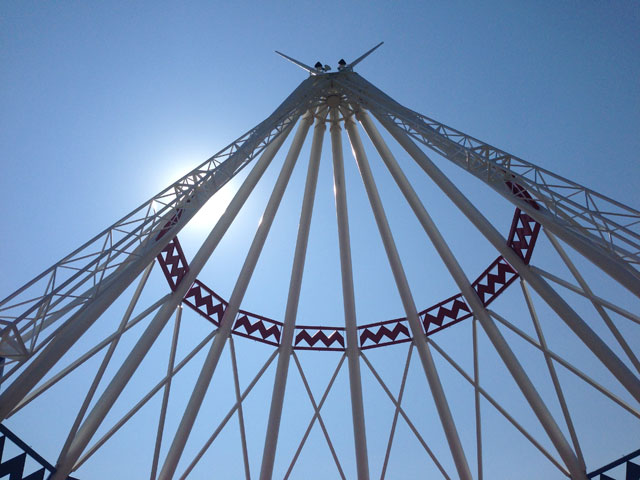 We drove as far as we could, ending up in Swift Current, Saskatchewan, for a late dinner and even later drinks.

With 14 hours and 880 miles between Swift Current & Bloomington, Minnestoa, this would be our major driving day, and we started it off by travelling for 25 minutes before turning around and returning to Swift Current to fill up the gas tank.

(The thought of being stuck in the middle of nowhere with no gas or cell reception was too much for Karissa to handle.)

After the false start, we piled on the miles, driving for hours with only Tim Hortons and the Welcome to Nightvale podcast for company. The cliches about Canadian prairies proved true, there’s really nothing but crops and cows: 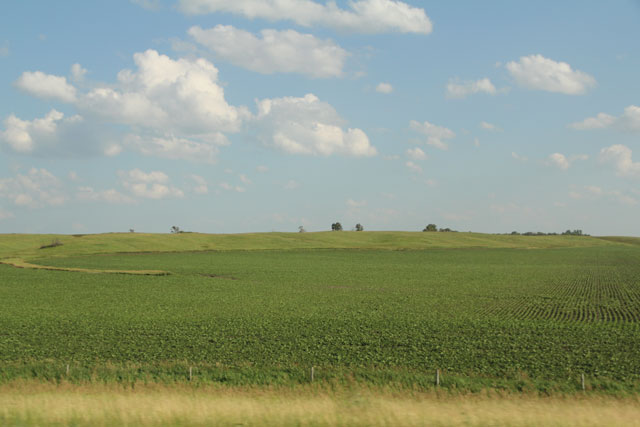 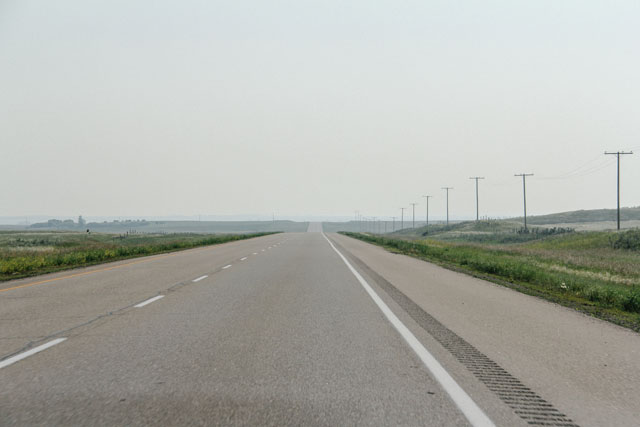 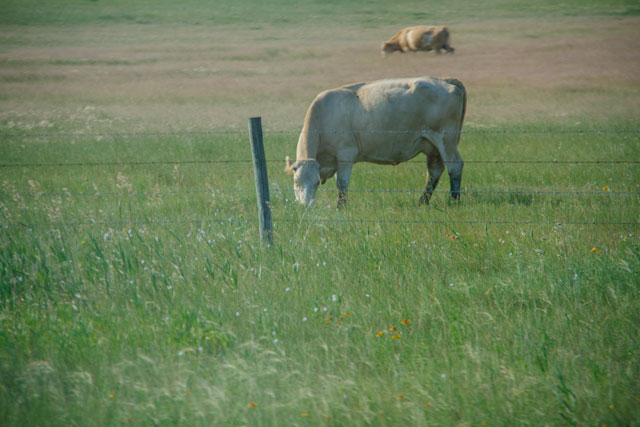 Moving through Saskatchewan toward the USA border, we stumbled on a Canadian landmark that likely has no meaning to Americans — the set of the TV show Corner Gas: 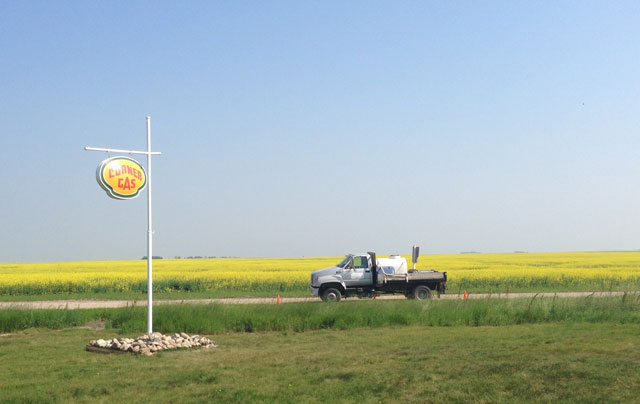 Eventually, we hit North Dakota, where the flat land turned to rolling hills and incredibly fast highway speeds — before we knew it, twelve hours had passed and we entered Minnesota on our way to Bloomington.

It was during this leg of the trip that I realized how much I hate sitting in the passenger seat. The entire day, Karissa had only driven two hours — even up to the last moment when we pulled into the Westin, I couldn’t give up the steering wheel.

Despite the extended drive the day previous, we were up early — driving is mentally exhausting, but we both had a lot of energy to burn. Our first stop was Super Target, where Karissa did some shopping and I did my best to clean the bug guts from the CT grille: 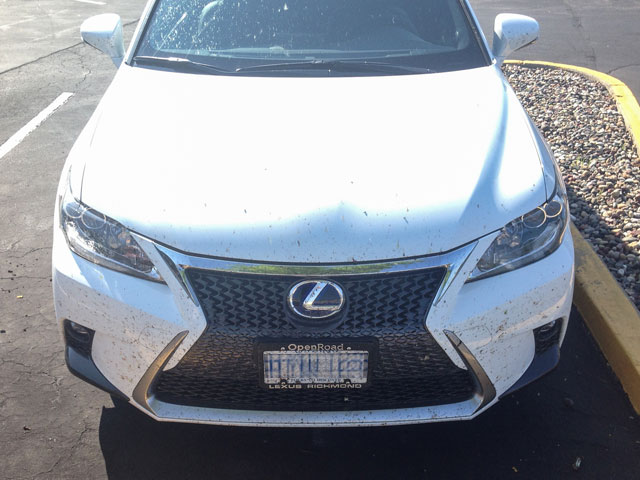 (My technique was simple enough — a full bottle of quick detailer, fifteen microfibers, and a patience that I only have when cleaning a car.)

Once the front-end was cleaned up, I discovered the only battle scar from our epic drive: 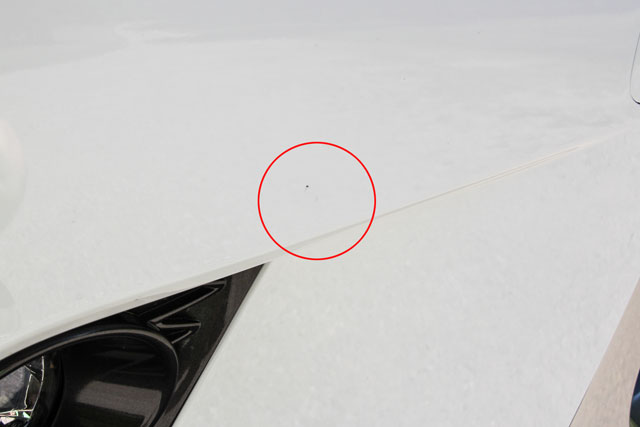 After a quick run through the Mall of America, we were back on the road and heading for Chicago. The drive from Minnesota to Illinois was the one big lull in our trip, with everything blending together until we reached the outskirts of the Windy City.

Without exaggeration, I have never experienced anything like the highways of Chicago. The amount of pay tolls is absurd — we had to pay over $15 in the span of two hours. Total shakedown.

With our breakneck speed travel catching up to us, Karissa & I ended the night with some stuffed pizza at Giordanno’s: 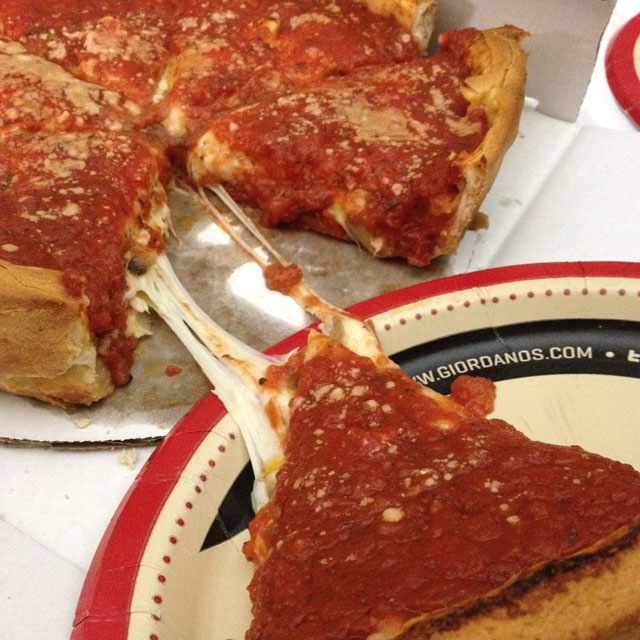 If the day previous had been the slow point of the trip, our final day on the road was a sprint to the finish — leaving Chicago, I ramped up our speed and we burned through Michigan and crossed over into Ontario for the final stretch.

Once you hit familiar territory, a trip no longer feels like a journey — the last hours on Highway 401 dragged along, with Karissa & I both happy and sad that our travels were coming to a close.

There’s no better way to get to know a car than an extended road trip, and driving cross-country created a very strong bond with our new CT F SPORT.

Choosing the CT over an IS was a logical move on my part, and one I’ll discuss in more detail shortly, but this TK hybrid hatchback impressed me more than any AWD IS 250. What started off as a calculated decision has turned into something else entirely — I can’t wait to spend the next three years driving this car.