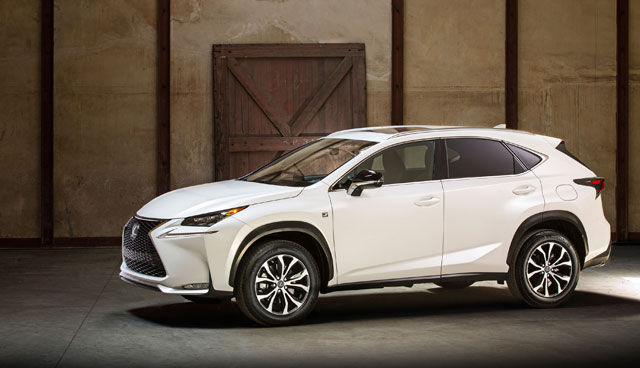 Although Lexus gave no official fuel economy estimates for the hybrid, a source said it should get in the 34-36 mpg range in combined city and highway driving.

The turbo drivetrain likely will account for 80 to 85 percent of U.S. sales, Lexus International Executive Vice President Mark Templin predicted. “In the U.S., they want fun to drive, a little more power,” he said.

“I think ours is going to be more refined than the rest of them in the market,” he said. “Ours is more linear, smoother. Much more luxurylike.”

According to the interview, the NX has been created from a combination of the CT & Toyota RAV4 platforms, and will be built in the Lexus assembly plant on Japan’s southwestern island of Kyushu.

"the NX has been created from a combination of the CT & Toyota RAV4 platforms" Can't go wrong there! :-D
I expect similar pricing to the Lexus ES350/300h, and class-leading fuel economy. BD
The NX Fsport will definitely be popular here.
The CT remains a just miss car, full of promise but not quite there. When u accelerate the engine screams at you due to the CVT box hardly luxurious! Yet it is fun to drive in a normal day to day drive but then so are many other cars, and this is the problem as well just not special enough for the Lexus brand. There is work to do here.