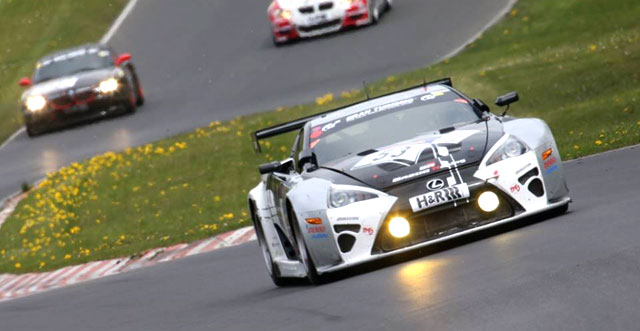 The Lexus LFA Code X had its first race this past weekend in the VLN3 ADAC ACAS H&R-Cup at the Nürburgring in Germany.

Considering the LFA Code X was in Japan just two weeks ago, it’s likely this first race was focused more on testing than winning.

The SP8 class was won by the Lexus IS F team of Uwe Kleen, Klaus Völker, and Jordan Tresson, followed by another IS F in third, and a LFA in fifth.

Definitely, Lexus is sandbagging by not showing what the Lexus LFA Code X is really capable of. Even the standard LFA is also merely in testing mode.
Kicking ass and taking names. This is a serious machine
can somebody explain how the ISF is beating the LFA?

It is quite simple: the IS-F CCS-R is a proven car on the Nürburgring and handled by the local team RingRacing. Gazoo is coming over from Japan with the LFA and they are using two or three raced prior 24h race to set up the LFA. Their participation is not aiming to win in first line but to prep for the 24h race.
Yes, exactly.
and where are the BMW's m3. are these ISF fast or are they just racing themselves?

Looking to seeing teams use the RC-F

Just seen some footage off the GR site of this car doing a lap in the latest VLN race sounds great but to me doesn't looked as hooked up as the normal GR LFA.Definitely has more grunt though.