END_OF_DOCUMENT_TOKEN_TO_BE_REPLACED " /> Spied: Is Lexus Developing a Four-Door Coupe? | Lexus Enthusiast
Menu
Log in
Register
You are using an out of date browser. It may not display this or other websites correctly.
You should upgrade or use an alternative browser.

An unusual Lexus prototype has been spotted by Japanese magazine Mag-X, here it is from three angles: 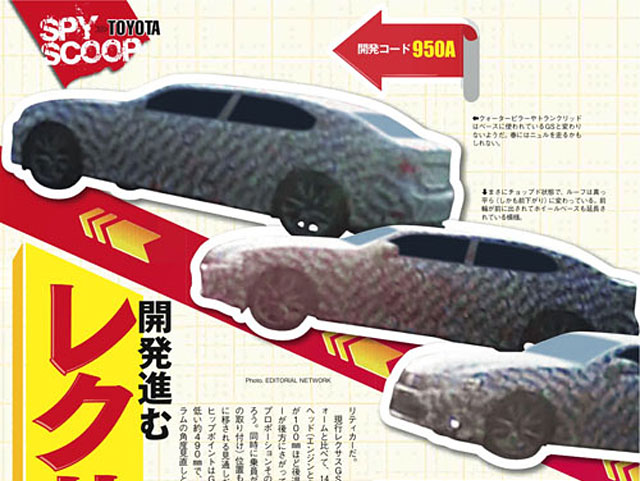 Despite wearing the front-end of what looks like a GS F SPORT, the long hood and short trunk suggest something else entirely — could Lexus be working a four door coupe to complete with the Mercedes CLS & Audi A7?

It would certainly make sense — Lexus has been expanding the lineup with the RC coupe and the upcoming NX compact crossover, and a four-door coupe would fit very well into the brand’s DESIGN focus.

(For anyone interested, the full page from Mag-X included after the jump.) 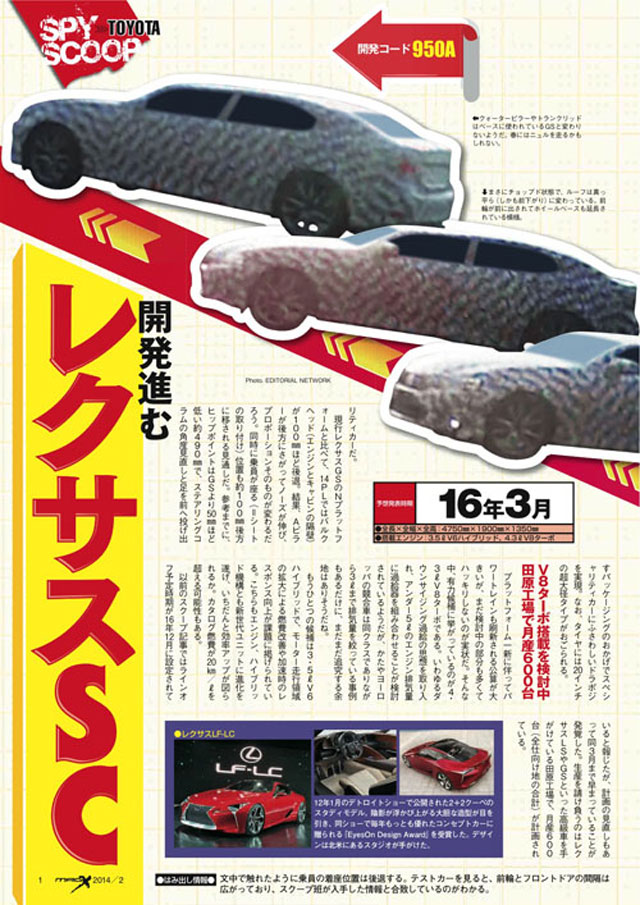 Somebody squashed Lexus's prototype ? :P
isnt that just a GS? maybe GSF if anything

Not a GS-F, but possibly GS-based 4-door coupe SC.

Looks a bit odd from that angle, thay could've provided more shots of it!
A stretched GS would look great. I'll expect something within 2 years...... MAKE IT SO! BD
That would be great for the new face of Lexus. They should focus more on a new IS F and a GS F though, it doesn't make sense for them to cut the IS F and they claim they want to rival the germs. Pointless!
And from the article it speculate there will be 2 engine choices from V6 Supercharger and V8 Turbo. With projected 600 unit/month production. This should shut some people up about Lexus being old and soft.
Is it just me, or does the entire window-line and the D-pillar look strange? Also the front wheel to front door gap looks very big, and suspiciously awkward. It certainly could be a 4-door "GS coupe" type vehicle. However, the entire vehicle just looks "off" to me. I have an alternative theory; that body shell could be hiding the next-gen LS platform underneath. That really long wheelbase and awkward features to me hint that this could be a possibility. Toyota is famous for their secrecy, and in the past, coming Lexus models have been tested underneath strange body shells to completely conceal the model being tested. The 4LS, before debuting, was spotted testing with a strange cut-up and modified 3LS body shell. Similarly, the 4GS before debuting was spotted testing with a modified 3GS body shell. Also famously, roughly a decade ago a strange Toyota was seen testing on the Nurburgring. It had a Toyota Crown body, but drastically shortened and it almost looked like a coupe or a 3-door vehicle. It turned out that was an early testing prototype for the IS F.

Oh boy the RC is one hell of a coupe. But it is enough with the coupes for my taste for now! And where is the IS station wagon? I would sign up for one instantly. But one more coupe? How am i going to put my wife, two kids including their strollers and luggage for a 10 day holiday into a freaking coupe???

Lexus does have models like the RX, GX, and LX you know...?
Yes, but: Where I live there is no GX and LX. And the RX is insanely expensive due to huge taxes on the heavy SUV pigs with barndoor aeodynamics. So no, those three cars are no option.
Well, MT! What about buying a used RX450h below 20k? ;) Space enough for your family. ;)
Oh dang that sucks! The ES is actually very roomy! Try that!
There is no ES in my country. And the cheapest used RX450s go for 25k€ which is 34k$. And they cost you about 4k$ a year in taxes and insurance because of the high hp rating. So this is not really an option.
Really? I thought the ES was one of the only Lexus models that's available everywhere. I'm sorry!
No, it is CT, IS, GS, LS, RX end of story. That is five models total. :-(

Maybe they plan to offer a GShL with executive-class seating, would explain the elongated rear door windows/section. Similar to the LS, would allow for more executive vehicles in other markets.

You mean being strictly a 4-seater? It could be an interesting take and offer rear luxury/infotainment equipment, along the lines of the Aston Martin Rapide and Porsche Panamera.

Just look at the article, its just a mule for the new SC! Thats why the roof is so low and the b-pillar looks strange!

The wheelbase looks too long for this to be the new SC. That mule has a significantly longer wheelbase than the GS.
How do you not know that Lexus might be planning to resurrect the SC as a four coupe and surpass the original 2-door with a production LF-LC?
Compare the proportions of this to the Mercedes CLS and Audi A7. The proportions on this are way off. Common sense immediately tells you that something is "off" about that above prototype. The above prototype seems way too long and out-of-proportion compared to a CLS and Audi A7. So even for a "four door coupe", the above prototype looks strange.

Could be a Panamera competitor....

Yes I wanted to mention that earlier and left before adding that. That is a segment of Luxury-Sport in which the market is accepting very well. This would also add yet another segment to add market share. The comment from LEXUS that the growth will come from adding more upscale Luxury rather than going lower like MB. BMW & AUDI are doing by introducing below 32K price range. LEXUS has the right theory and it will win in the long run.
Yep, that's likely what it is.

Damn Lexus wont stop they just hit us with the RC now we are seeing this? Keep it coming Lexus no idea what this car could be at this point

This was actually seen before the RC-F was revealed.

I mentioned this many days ago krew(http://lexusenthusiast.com/2013/05/09/lexus-lf-lc-production-model-in-2016/#comment-1194760147), but heard nothing from you (made the mistake of not using the "contact" button) and it fell on deaf ears. This was shown at Club Lexus on January 7, 2014 and likely spied in December 2013.
If Lexus is planning on going into the direction of the four door coupe, they have to come really good to win me over from the m6 gran coupe and cls 63 amg. I drive only Lexus but I would definitely buy both if I had the money.
A car With four doors is by defenition NOT a coupe.
WoW. So Akio read my words Is so, this is definitely the next generation LS to go head to head with the next generation Panamera also the GS will be the same
These are just very, very bad photochops of old Lexus prototypes. Nothing to get excited by!
TO MAKE SURPRISE DEBUT AT GENEVA IN MARCH
This will compete against A7, Panamera and 6-Series, nice!
Driving the NX 450h+