END_OF_DOCUMENT_TOKEN_TO_BE_REPLACED " /> Lexus to Introduce Full Range of Turbocharged Engines? | Lexus Enthusiast
Menu
Log in
Register
You are using an out of date browser. It may not display this or other websites correctly.
You should upgrade or use an alternative browser. 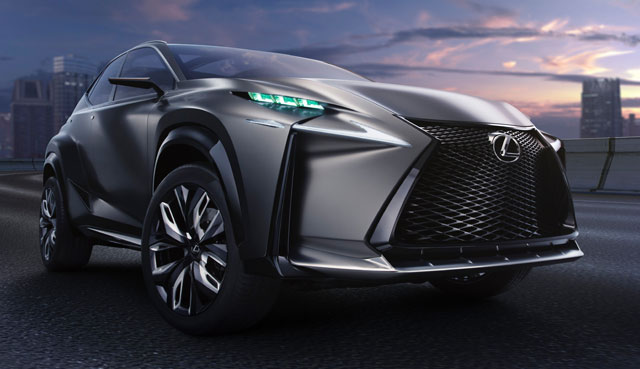 Motoring Australia has some details on the future of turbo engines in the Lexus lineup:

Little technical information was released in Tokyo and no outputs confirmed, however Lexus group manger engine product design Teru Ogawa told motoring.com.au that a family of engines was being developed.

Asked what capacities would be offered, he said “both larger and smaller”. He also said the target was beating the performance and refinement of engines produced by Lexus’ German rivals, such as BMW’s N20 turbo four.

The 2.0L turbo engine that debuted last week in the LF-NX concept features a dual port exhaust integrated into the cylinder head, the first time this has been done in a turbo engine:

Although the engine is based on the 2.5-litre AR four-cylinder unit, Ogawa said a new crankcase aided low noise, vibration and harshness levels, as do contra-rotating balance shafts. He would not state fuel consumption targets but confirmed the engine had been developed with stop-start capability.

There’s also the possibility that Lexus may pair a turbo engine with their hybrid system:

Separately, Toyota deputy chief officer Satoshi Ogiso, who is best known as the father of the Prius petrol-electric hybrid, said the turbo-petrol engine would be suitable for performance hybrid drivetrains.

“Adding a turbo engine to the hybrid system does not make so much sense for a regular car,” he told motoring.com.au. “But a premium brand or sportier car requires so much performance, so turbocharged hybrid is good for the top-end premium car or sportier car.”

It will be in Toyotas in couple years (no more camry v6)
I'd love to hear Camry 2.0 Turbo ! Because I really really like 2.0 Turbo , for example the unit from Celica or Caldina GT-Four !
The Camry V6 is a sweet power plant. Don't expect the Camry to be going turbo anytime soon..
Not if they follow the current market trend of down-sizing.
They don't need to follow a 'trend' The 2GR V6 is powerful, silky smooth and efficient.
I'd rather have the V6 too but the question is, is it just as efficient as the new turbo engine? If not, then bye-bye V6, at least in the Camry.
Turbo motors are not really fuel efficient. Look at all the Turbo cars today, they all guzzle gas way beyond their sticker MPG numbers. Why would Camry need a new engine? The current Camry V6 does 0-60mph in 5.8 seconds. Fastest in class and gets better MPG than the turbo competitors.
I don't think they really care about fastest in class. I think it boils down to cost, which turbos are cheaper but produces same performance. Who knows, maybe Toyota/Lexus turbos will be more reliable and more efficient than their nemesis'.
How is a turbo setup chaper than a N/A V6?
Why is Ford and Hyundai switching to turbos then?
3AR-FTE it will be. It's gonna be awesome mark my words. When Toyota does something they perfect it.
Looks cool already!

Sounds very exciting!
I would expect Lexus to get a 240-250 HP version, and Toyota to be around 210HP for their Rav4's and Camrys. And a V6 version? 350 HP? The Lexus will probably be more performance oriented, and the Toyota will be more efficiency-minded.... BD

Hyundai's 2.0L in the Sonata is already making 200hp, a 210hp 2.0T in the Camry top of the line model would be embarassing. I expect the 2.0T to put out similar HP to the Lexus'.
I thought Hyundai's 2.0 Turbo makes like 276hp ?
My mistake. I meant their 2.4 in the Sonata/Optima.
Again, the focus would be on fuel economy. People buy MPG over HP now. That's why so many makers have been caught in EPA MPG "miscalculations". If the car gets 30+ MPG combined, that will bring new buyers. BD
That's why they have the Camry hybrid w/200HP for FE concious shoppers. Another camry with 210HP would be redundant.
Lexus already said that the new 2.0t will have V6 torque of 380Nm of and will beat BMW's Turbo power 2.0L

Everything's planned a few if not several years ahead, so it is more about who say and when, rather than what. Motor trends are already planned until their end in a mid 2030th. Lexus has already started to move into design and life style brand and wish to represent themself not only as a vechicle brand in the future. Sad thing is that a money drives instead of innovation. Otherwise we would be much further today than in a hybrid world. Today's engines will dissapear only when oil end's. And it's going to end for a car market in some 20-30 years.
My perfect thinking is 1.6 2.0 2.5 3.0 3.5 4.0 4.6 5.0 Ta. Daa Honestly my wishes is that Toyota exit the next Mark-X and next Crown It is shame that Hyundai have the courage to do so and Toyota afraid

You meant , you hope Toyota release Mark X & Crown to the worldwide instead of just Japan-only ? Speaking of 1.6 , I wish for 1.6 SuperCharged reborn ... it may sound stupid , but 1.6 SC to replace the use of 2.0 or 2.5 , no ?
There actually was Supercharged Version of the 1,6 Valvematic available in the Sout African Auris TRD. Did something about 180hp. And the there is Bemani, a swiss tuner. You can buy the Bemani tuned Toyotas directly from Toyota dealerships. The 1,8 Valvematic Kompressor does 225hp and the 2,0 Valvematic Kompressor 245hp. :-)
Yes Toyota need this hardly to continue there global look makeover Pretty sure the current Mark-X can wipe the floor with the Genesis And the Majesta or Crown is far more luxurious and elegant than this copycat Equus If VW, Kia and Hyundai can make it, so definitely Toyota also And no they will never ever interfere with Lexus, as generation by generation making Lexus to be Porsche / Maserati category, not mean to be niche, but I mean to be more sport luxurious and leave the space for Toyota as brand to step up also

Can't wait for this to appear in the IS. The car is already better to drive than the 328i. Better steering, better ride and handling. All it needs is an engine that is at least as good as BMW's N20. Then the IS will be unbeatable because it will certainly be more reliable and better built than the bimmer.