END_OF_DOCUMENT_TOKEN_TO_BE_REPLACED " /> Eiji Toyoda, Toyota President & Lexus Founder, Dies at Age 100 | Lexus Enthusiast
Menu
Log in
Register
You are using an out of date browser. It may not display this or other websites correctly.
You should upgrade or use an alternative browser. 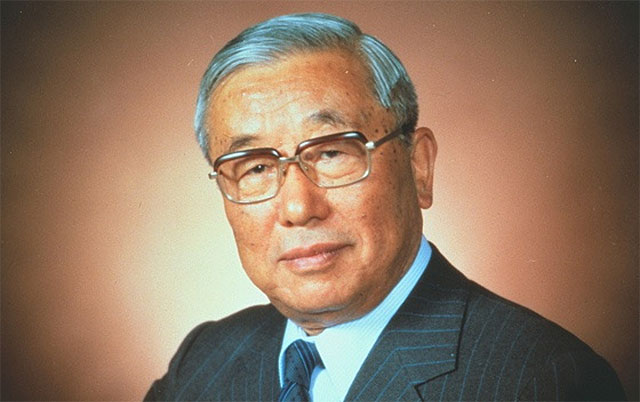 Eiji Toyoda, the longest-serving president in the history of Toyota and the man responsible for the creation of the Lexus brand, died today at the age of 100.

His legacy extends through every corner of Toyota’s success — under his leadership, the company grew to become the world’s biggest automaker and revolutionized modern manufacturing with just-in-time production and the creation of “The Toyota Way“.

With this considerable influence, he was able to push Toyota into the luxury car market — here is the story of Lexus, as told in Chester Dawson’s book The Relentless Pursuit:

At that top-secret session [in 1983], Toyota Motor’s top brass debated a car project so sensitive it was codenamed with an encircled letter F, or maruefu (and later known internally as the F1 program—but which bore no relation to the Formula One circuit). That nom de guerre was a nod to its make-or-break status as the company’s (F for) flagship, No.1 vehicle.

Chairman Eiji Toyoda posed a question to the company’s senior executives, designers, engineers and strategic thinkers—the Toyota Motor joint chiefs of staff. ‘‘Can we create a luxury car to challenge the very best?’’ he asked. To a man, the assembled generals of Toyota Motor’s far-flung empire answered in unison: Yes — a ‘yes’ full of conviction.

So, in a move that spared no expense and cemented his legacy as one of the automotive world’s greats, Eiji Toyoda gave the order to move into the luxury market. Six years and half a billion dollars later, the very first Lexus was born.

For a deeper look into the life and accomplishments of Eiji Toyoda, please refer to the obituaries posted by The New York Times & Bloomberg. Mr. Toyoda had three sons and a daughter with his wife, Kazuko. He is survived by Kanshiro, his eldest son.

As durable and innovative as the company he represented and built. He will be missed. Founder of the Toyota Production System, so innovative, ALL successful automotive companies use it, in one form or another. RIP and thank you, Toyoda-san. BD
RIP Mr.Toyoda
The epitome of honor and integrity is born out in the quality of the vehicles he brought to fruition.
R.I.P to the reason why we are posting here today. We salute you Eiji Toyoda.
Rip Great man with sharp mentality
Thank you Mr. Toyoda for bringing forth the LS in 1989 which is where it all started for me. As a teen, I could only dream of the day I would own a Lexus. Fast forward - my dream has come true a few times over and will not end here. Thank you for giving me a lifelong passion towards the best car brand in the world. RIP.
As the owner of an original LS, I have to personally thank you Mr. Toyoda for a beautiful, well built, trustworthy automobile that has gotten through my early twenties all the way to my coming forties. It has been a truly fantastic car, best thing I've ever owned. And the celica supra I owned before was the pinnacle of my youth. Thank you for always making cars that I've matched my needs. Rest in peace. -Bobby
Incredible man. His legacy shall live on. RIP
RIP mr Eiji
I am satisfied with my corolla AE112 and etios valco. Toyota has been part of my family since our first 1973 corolla. Haven't tried lexus, but it is already in car I own before I die list... RIP Mr. Toyoda...
Rest in Peace Toyoda-San and thank you for the legacy you bestowed upon the world.