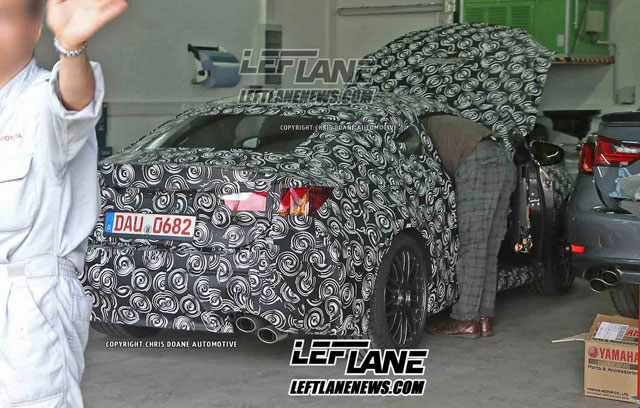 See the photo above? At first glance, it looks to be another spy shot of the recently spotted RC F prototype, but zoom in on the right side of the image and it appears a Lexus GS F is also in the garage: 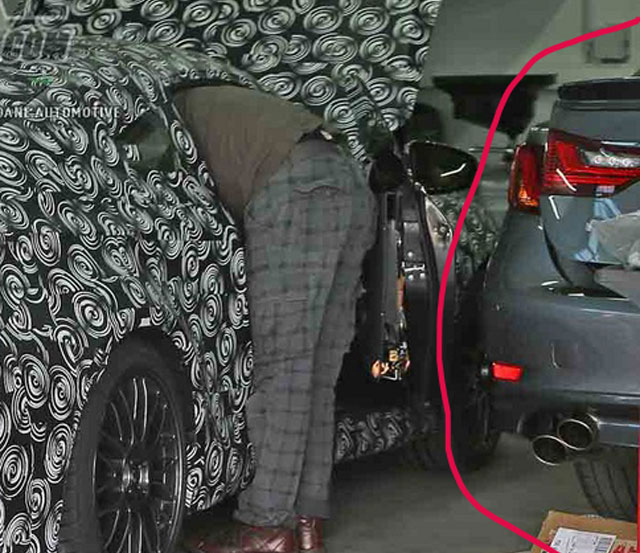 Just like the current IS F and the new RC F prototype, this GS is equipped with stacked exhausts — while a high performance version of the GS been kicking around for quite some time, this photo and the recent GS F trademark would suggest it’s more than just rumor.

Hard to believe, but today may have revealed two new F models.

Great job krew! I'm glad to see that it was on here the GS-F was discovered. I had noticed that in the gallery of the RC-F article and have failed to see anyone else notice elsewhere online, while they also ignorantly call it the IS-F coupe. Lexus did file trademarks for RC-F, so IDK why other stories failed to take note of that.
It's a good day.
I'm so excited, all this great news in one day! After getting my GS Fsport, I'm getting that coupe! Sorry bmw, Lexus has an offering in the making.
Looks like it is using Yamaha components. I hope that is sings for the LFA motor in the GS-F Sport. Hopeful wishing.
It is well-known, common knowledge, that the M5 is underrated at 560 HP (RWD, 4400 lbs, 0-60 in 3.7). To move that much weight, that fast, from a dig, without AWD, would require more like 650HP! Whatever the power is, the goal has to be a sub 4-second 0-60 time, and an 11-second quarter. Basically, be as fast in a sprint, as a Lexus LFA. The GSF can get there with a turbocharged V8 from the current ISF, with a legit 550HP, and keeping overall weight under two tons. If it can come in 500 lbs lighter than an M5, it won't have to be nearly as powerful, and it's dynamics would easily be better. One thing we know about the M5 is beyond sprints, the cars dynamics have gone straight to hell! I would expect pricing to be in the $85-89k range this time next year..... BD
I would like to caution everyone, this only shows a shot of the back of a GS with stacked exhausts. If it had been any other noticeable changes in the style, I would think the cameraman would focus more on the car without the MULE skin instead of the one with the MULE skin. The car with the MULE skin - you can clearly see other elements of the design that separates it from any other vehicle Lexis has. Its a 2 door coupe, maybe a hatchback, and the interior is more IS than GS. While the MULE has similar tail lights with the GS, I don't think Lexus would introduce a GS F model before they do a IS F, or the RC F (IMO).

It's not a MULE, this was the mule for the RC-F on July 16, 2012. This coupe spy shots are of an FEP prototype.
Given the GS has been out a while now and the IS is only just this second launching I would not be surprised if a GSF came first. The high perf models are normally a year or two after main model launches.
What is this "MULE skin" you speak of? You put camo on production models. A mule, on the other hand, is used to test the underlying chassis and powertrain, not test out a new exterior design. Automakers run mules with whatever previous generation bodywork they have lying around. The RC shown above is close to final design.

can someone tell me why it cannot be another RCF but without the print?

There's is no way that the Lexus engineers would dare to allow an uncovered future design be exposed in such a public setting. It's grounds for termination and possible prosecution and imprisonment. Also, the shape points to the L10 GS.
maybe because you can clearly see a trunk LIP on the grey car and on the camo car the spolier lifts out the trunk.... pretty different design can safety say its not the same car

I'm so glad for the stacked exhaust tips. Such a unique element.
LOL! When I saw those pictures I actually compared the regular GS taillight with the taillight on the GS F and saw it was the same. This was 2 hours before this was posted.
I remember these photos from January, which were likely RHD JDM-spec prototypes alongside GS300h test vehicles. The RC350 has also been testing on Toyota grounds since early this year, so I'm guessing these are the first set of LHD prototypes. Being an engineer, it's very interesting to study competitors development habits and standards.

Who do you work for?
Jaguar Land Rover PLC.

Guys i hope everyone has taken note of how low the RC F coupe is next to the GS F.

I think it might be on a ramp blocked by the box, bottom right doesn't look right if it was sat on floor.

Those two cars are exact same cars, one with camo and the other one without probably lifted to put the camo on. There is one picture where there are two coupes both with camos next to each other so one of them is that teal colored one
I'm not 100% convinced that the vehicle on the right is the GS-F. Given that the back of the speculated RC-F prototype (left) looks almost the same, it could well be a second, unwrapped RC-F prototype.

Yes, That was exactly my point about 10 posts above :)
Only the rear is structurally identical to the Lexus GS. We all know what a GS looks like. That's the GS in the picture. It probably had no badging on it, and the photographer didn't put it together on the fly, based on the exhaust. Or else, why wouldn't he take a picture of the car RCF without camo? BD
My bet is that the car on the right is the next GS350 F-Sport.
Uh.....Lexus already has a GS350 F-Sport. Why would it have quad-exhaust tips like the ISF? BD
I'm guessing because next summer the current GS350F-Sport will be 2 years old and ready for a minor refresh. It would also to reinforce the F-Sport line as a true sports line and distinguish it from non F-Sport models. As a current GS350F-Sport owner, a sport exhaust would have been much appreciated.
Don't hold your breathe. Quad exhaust mean there's a big V8 under there. Always has, always will.... BD
Lexus may have delivered an early refresh last time in 2007, but that isn't always good product planning. Year-to-year changes are necessary, but minor refreshes should be implemented after facelift/major mid-cycle updates(4th model year) on 7-year product cycle. The F-Sport will never 100% sport the same exterior appearance as real F performance variants.

Very nice to see that Lexus is expanding there lineup in the next few years! So in the past few month i learned from krews Website that Lexus will bring a small SUV, a Cóupe based on the IS, new engines and a GS F.... And now we already see pics of an RC-F prototype....NICE
Hopefully this begins a new trend of Lexus offering F models of most of their vehicles to better compete with the M series BMWs, AMG's and the S and RS Audis.
There is no way that could be a GS-F. The back looks like a regular GS with TRD kits attached... I would expect the GSF to have a little more fanfare than that

The ISF sedan looked just like that. It has a spoiler and quad-exhaust tips. You want flame-throwers? This is Lexus, not Subaru...... BD

Lexus slipped up big time they are testing these cars at the same time it looks like. But lets not jump the gun this could be a GS with TRD bits on it. I see no reason why this coupe would come out before the GSF.. The GSF needs to have at least 550 HP to run with the AMG and M cars... Im pretty sure it will handle better then the AMG and M car but the power has to match or beat them. I cant wait !!
I Michael Alex Williams hates know it alls