As part of their sponsorship of the Australian International Design Awards, Lexus Australia has released a stunning collection of photos featuring the LF-CC concept and the new IS F SPORT together: 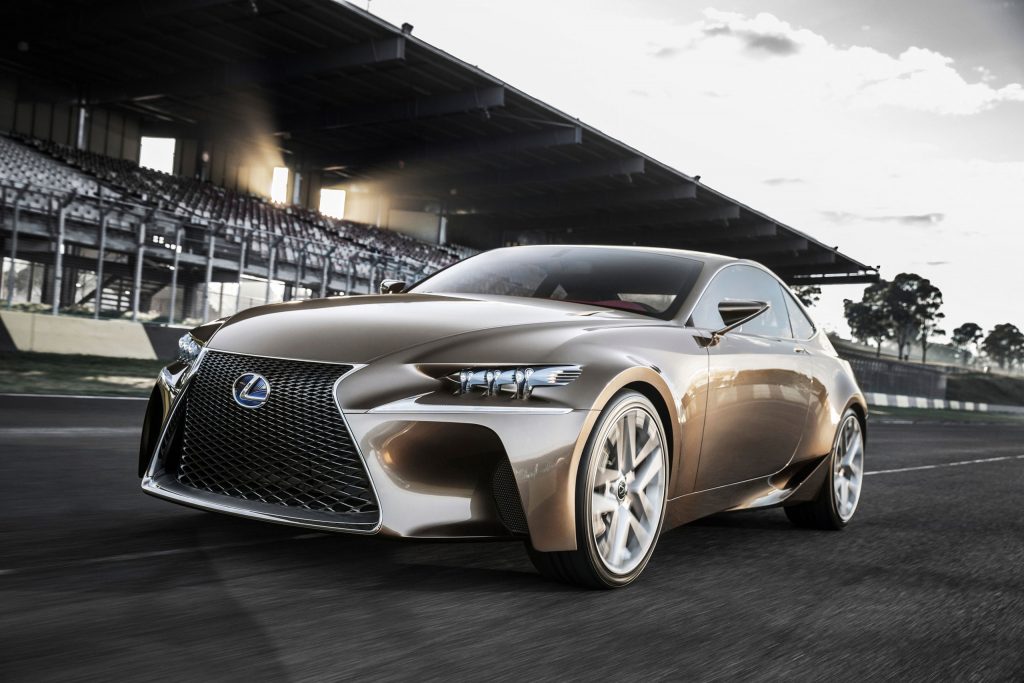 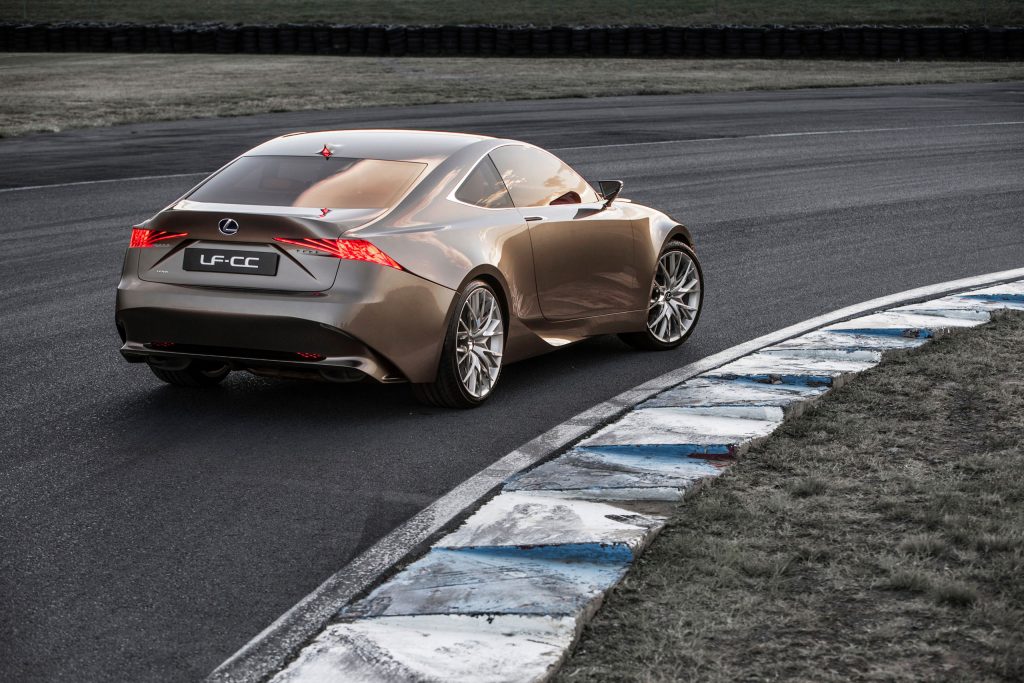 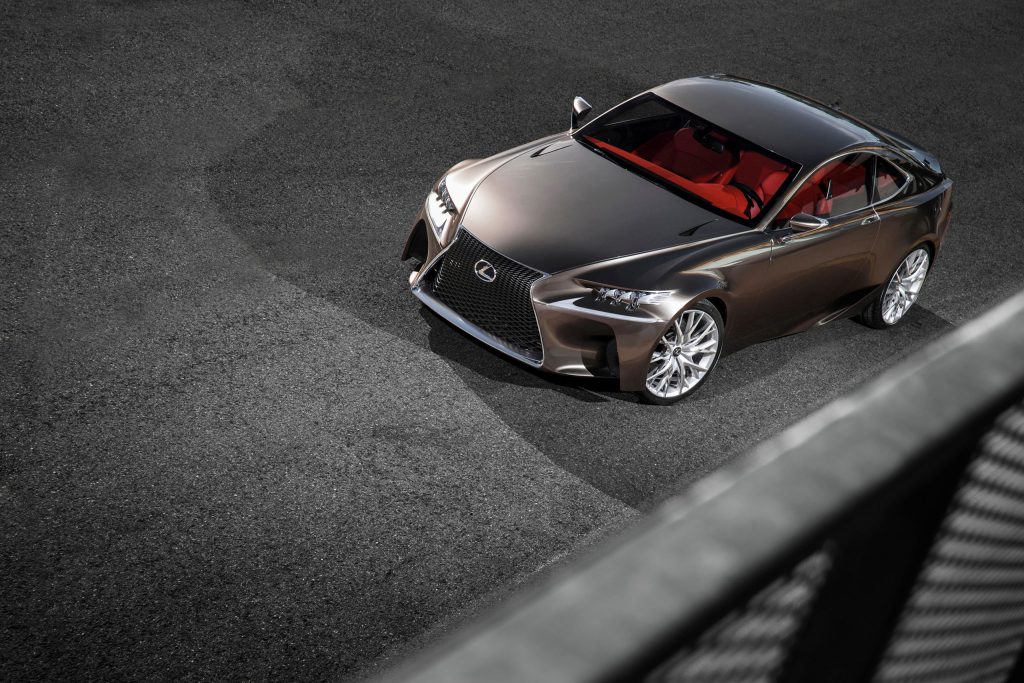 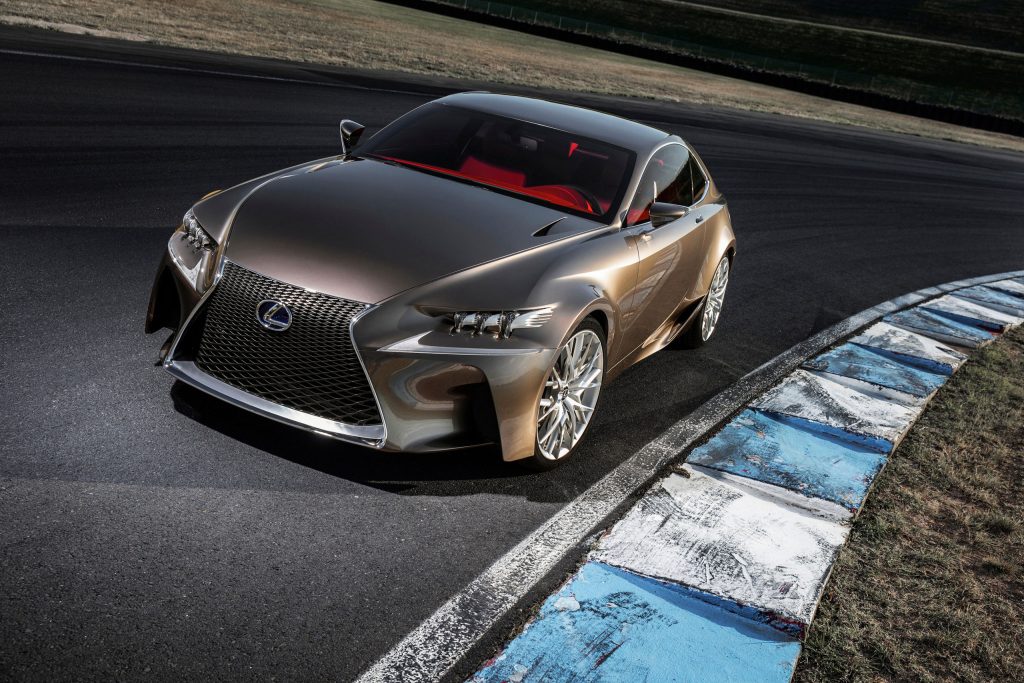 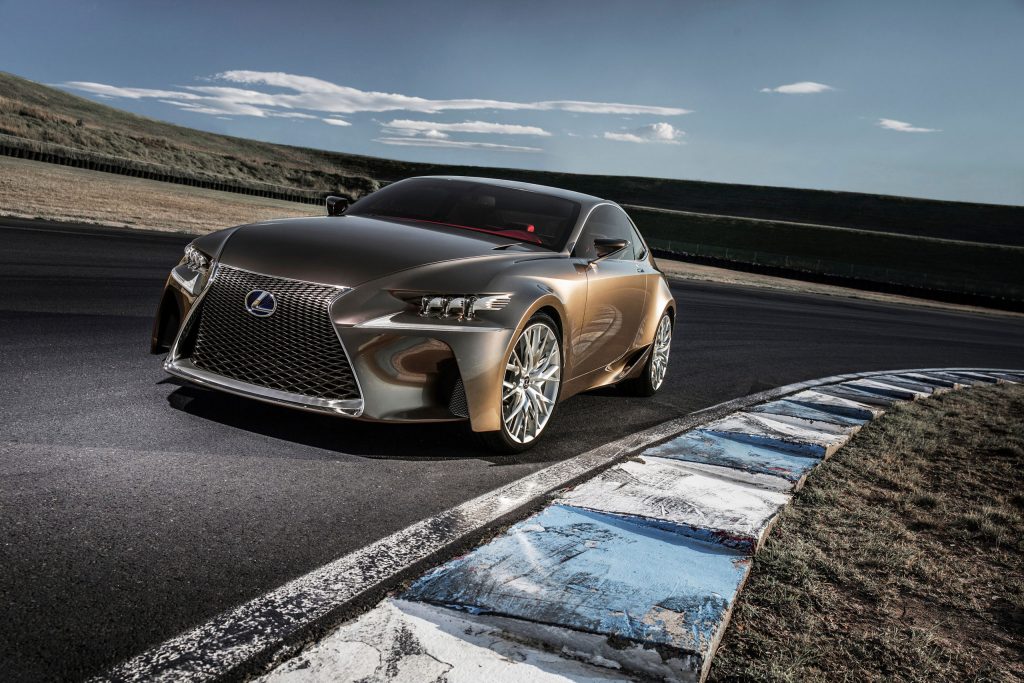 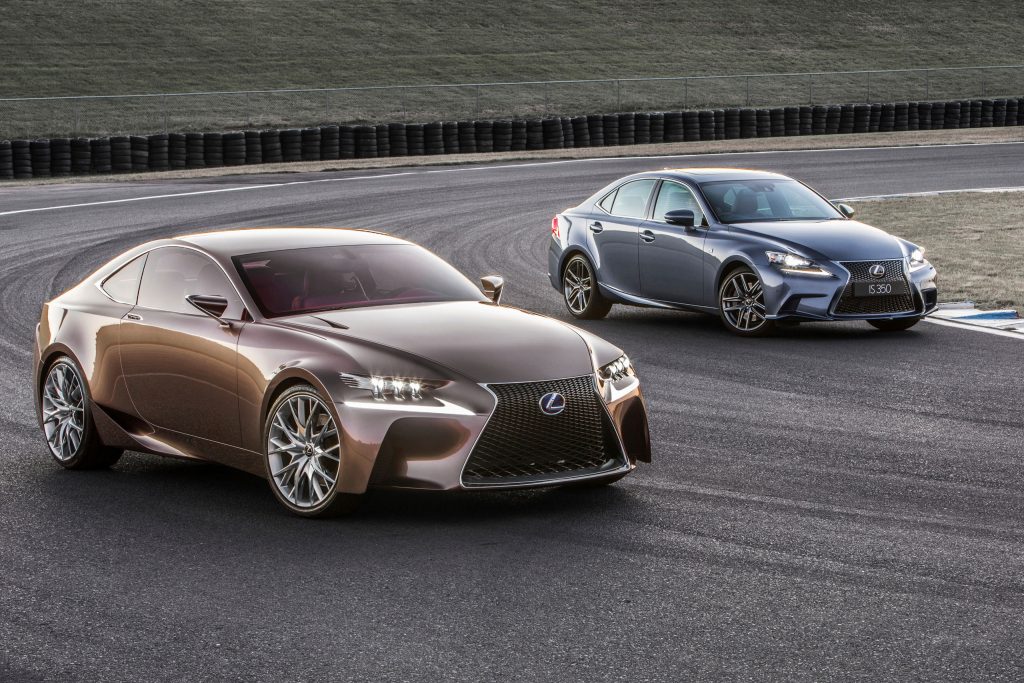 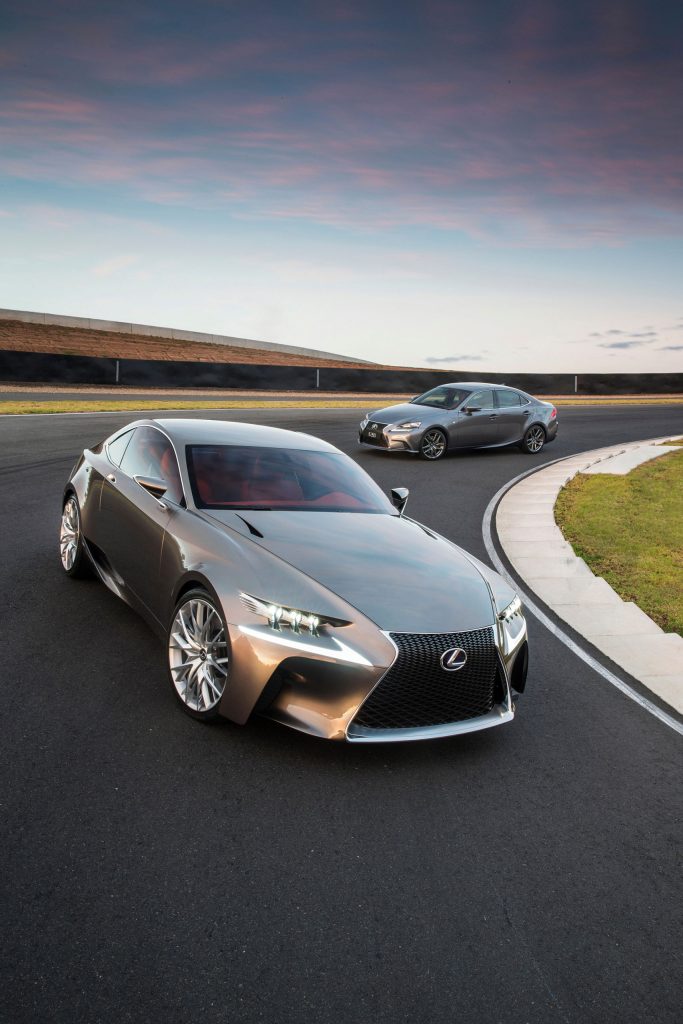 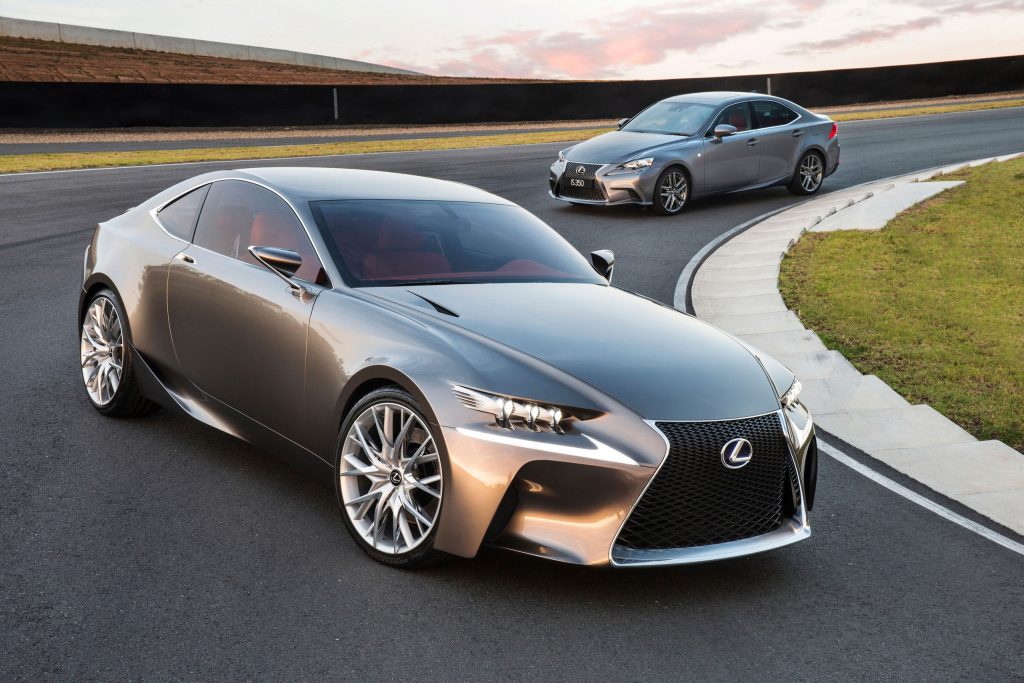 The similarities between the two cars are dramatic, despite the difference in doors — even still, the Lexus Australia press release provides an interesting perspective:

Although concept in design, the LF-CC provides much of the inspiration for the forthcoming, all-new IS Line and provides a hint of a future two-door mid-size coupe scheduled for production.

Lexus Australia chief executive Sean Hanley said that the LF-CC brings with it renewed focus on design and driving dynamics.

“The LF-CC signals a new Lexus, one buoyed by confidence and a desire to deliver vehicles that are visually and dynamically appealing,” Mr Hanley said.

“LF-CC is more than a concept, it is a promise from Lexus to deliver an engaging and exciting two-door coupe – in fact, its impact is already evident in the forthcoming IS Line.

“The beauty of LF-CC is more than skin deep, with its innovative petrol-electric drivetrain and on-board features, the LF-CC and in fact the LF-LC coupe concept are graphic demonstrations of what’s to come from Lexus,” Mr Hanley said.

As a bonus, there’s also a video from the photoshoot:

Lexy, BRING IT ON!!! and don't change a thing! stunning!
Supremely gorgeous!
The LF-CC is epic enough to ride with me, Black Dynamite! Even the color is a spot-in match..... BD
Surprised this colour is not available for the IS. They have the concept yellow for the CT. Perhaps it will different elsewhere, but in Canada you really only get a choice of Silver (x3 different), white (x2), black (x2, one of which is F-Sport only), and red/blue (F-Sport only). They got rid of the Dark Brown (Fire Agate), Silver-Blue (Cerulean Blue) and Dark Blue (Deep Sea Mica).

To be fair, this is a brand new color just introduced with the LF-CC. I'd like to see it reach production as well. (Very excited to see that Canada is getting the Ultrasonic Blue IS F SPORT.)

I echo the rest of the posters : Pretty Please, Lexus. Bring over the LF-CC unmodified as the next RC-F and I know what my next Lexus will be.

I think there will be minor changes, but judging from the IS, this new coupe is going to be very close to the concept.

I'd love to see the GS 450h's driveline find it's way to the RC.
That LF-CC makes the new IS look dated already.
The Video says to me that the LF-CC Concept is production ready....Don´t wait any longer Lexus...

You may be right, but even if they had plans complete and solified today, it would still take 6+ months to set up the factory and do mockbuilds to make sure it can be built efficiently and without issues and first production model to role off would be a 2015, similar to what has been rumoured (but out at dealers June/July 2014). I'm hoping this is the case and that its all planned, just takes a year to come to fruition.

the LF-CC's front is what the new IS should have looked like - damn amazing design!!
I will buy it, like it is.. Don't change nothing ! Give us a good price !
Wow that's incredibly sharp!
Whta do you think about the new BMW 4er guys?

I really like the new 4, but I don't think that you can compare it with the LF-CC, because it always will be a concept, not a production car. I think that, when Lexus created the new IS some years ago, it was also the intention to create a new IS coupe but something has changed in the meanwhile. The auto market (Audi/BMW/...) has pushed Lexus a little bit... So I think that Lexus will create a whole new (coupe) RC car with some characteristics of the IS2014, but with sufficient differences to it see it as a new type. Just like you can compare the BMW 3 with the 4. The LF-CC concept looks to be finished for (showed up in France, 2012) to release only somewhere in 2015 or so. Maybe I'm wrong, but I can't wait to see the first pictures of th new RC.
Totally agree with you, and at least a streamline version of the IS based on the RC would be absolutely gorgeous, with a fastback shape though

I really I don't know if americans may loves a coupe with a very original shape like the RC. I went on autoblog.com and i was reading some comments about the beautiful 2014 BMW 4 Series....well, mostly of them were absolutely negative and many people said the a5 looks way better than the 4 Series...You gotta be joking, the dullest coupe on earth now is taken as landmark? Really?
Driving the NX 450h+