By way of Club Lexus, here’s a new rendering of the much–rumored Lexus compact crossover from an unidentified Japanese magazine (click for a larger image): 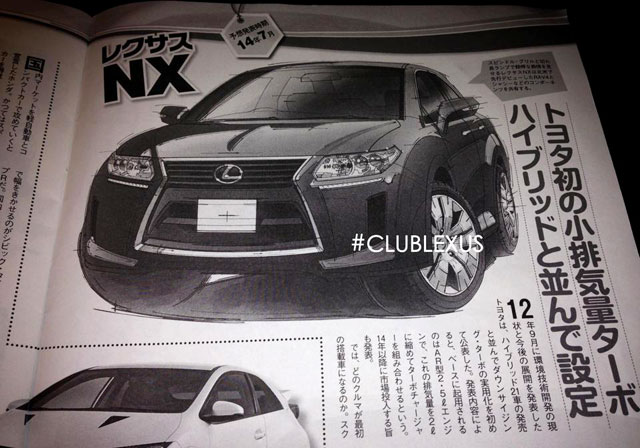 Admittedly, the image is overdone with its too-large wheels and exaggerated front-end, but the flat-nosed grille could work well on a Lexus SUV — still, it’s tough to tell if there’s any basis in reality with this sketch.

(There’s some information in Japanese, but the only detail I can decipher is the NX designation, which is expected to be the name of the sub-RX SUV when it’s eventually released.)

I hope it doesn't have a flat front like rav4! Suits the rav4, but the Lexus needs something with more finesse.
I guess 12 means december which would mean it will be shown at the Tokio motor show in November. Would make sense to me cuz the RX is moving to Canada in 2014 so at TMK would be room for a new nodel.
That looks like a vw
Looks more like an Audi or Honda. Not Lexus like at all
The Japan's Best Car Magazine usually get it right. Not exactly, but all of the element clues.

Wait, isn't that Thai?!
It's the Thai version of the Japanese Magazine.
Wow the pics you have are nice. It's a cross between the RX and CT. Fingers crossed this is the NX.

I'm excited about this vehicle,but not if it looks like this!
it talks about toyota downsizing engines to a hybrid turbo.  planned sale in July 2014
Am I the only person who prefers the old door mounted mirrors opposed to the new door mounted mirrors found in the CT, new IS, GS & LS?? The old IS250/IS350 had more classy looking wing mirrors than the new IS250/IS350
Can't they come up with a different name? NX makes me think of a nasty old Nissan Pulsar model
When is the ct200h going to be improved? It is not good enough for the price you have to pay for it - too noisy when pushing on a bit and needs more luxury features to be included e.g electric seats should be standard on the base model like other Lexus products and so on