Last month, Lexus invited me to Palo Alto, California, where I had the chance to try out the new 2013 LS in all its many forms. The following is a recap of my time behind the wheel of the new model — for a more thorough overview of the 2013 LS, please refer to my previous article.

Before stepping off the plane in San Francisco, before traveling to Palo Alto, before even driving the new 2013 Lexus LS, I already had an angle for my eventual review.

It all has to do with location — the LS preview event was held in Palo Alto, right in the heart of the USA’s Silicon Valley and only twenty minutes away from Apple headquarters in Cupertino, which in turn leads to an interesting parallel.

Apple’s current strategy for their iPhone resembles what Lexus has done with the 2013 LS — rather than change for change’s sake, both companies have instead focused on refining their flagship products, making some visible exterior changes while concentrating on improving the overall experience.

The question is — did Lexus take it far enough with the 2013 LS? I drove five different variants to find the answer to that question. 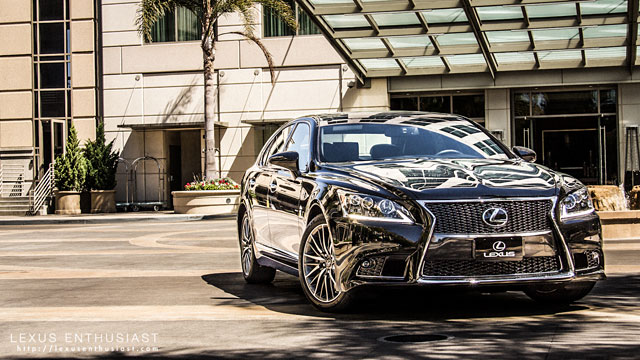 Despite the fact that it would be near impossible to photograph, my very first choice was an all-wheel drive LS 460 F SPORT in Obsidian — it just beat everything else in the parking lot senseless with pure aggression, the black and chrome reflecting its surroundings like a camouflaged predator.

For the 2013 LS, Lexus has taken the basic shape of the 2007-2012 model and polished it, carving deep, muscular creases throughout the entire body — in Obsidian, though, it’s best viewed in black & white:

Right from go, the LS F SPORT is a driving experience unlike any previous LS — no matter the Drive Mode Select setting, the steering is sharper and much more direct than the outgoing model. The upgraded 14.8-inch Brembo brakes on the front wheels also surprised me with their sensitivity — in every aspect, the LS had an unexpected nimbleness, as though it was much smaller than it really is.

Learning that the LS F SPORT was equipped with an intake sound generator had me a little concerned — intentionally introducing any noise into the cabin wouldn’t seem to fit with the general character of the LS, even for the performance model. Luckily, this was an unfounded worry — in contrast to the quick-tempered sound of the 2013 GS, any hard acceleration in the new LS is accompanied by a faraway thunder, deep and distant and entirely suitable for the sport edition of a flagship sedan. 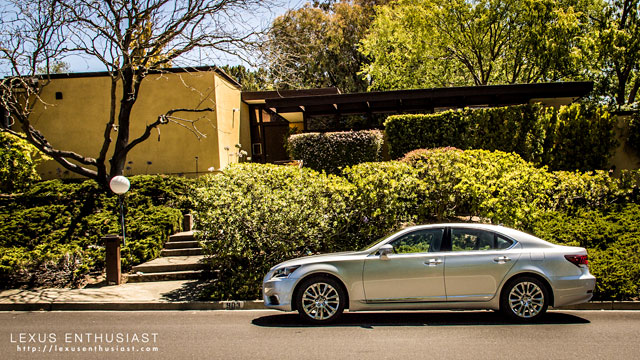 Swapping the LS F SPORT for a LS 460 in Liquid Platinum, I set off for a brief drive through the residential area surrounding Stanford University. Transitioning from all-wheel drive to rear-wheel drive made for a dramatic difference — even at low speeds, the RWD LS 460 felt light and relaxed compared to the AWD LS F SPORT.

This suburban cruise highlighted the traditional strengths of the LS — the road’s flaws and faults were unnoticeable, and the sound of the outside world was a whisper. These are the characteristics most important to me when evaluating the LS, and I was not disappointed.

One other thing, the 19-inch hollow chamber wheels look fantastic: 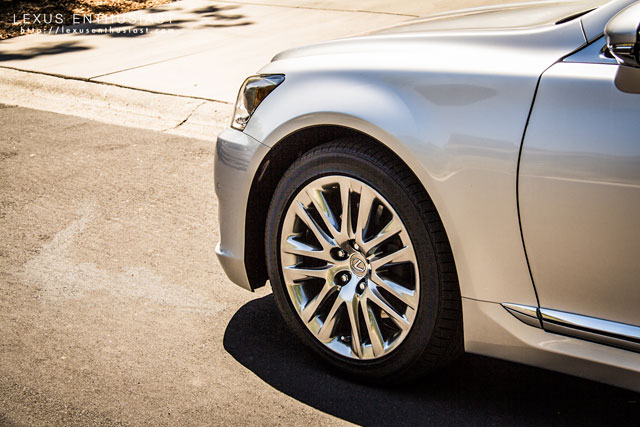 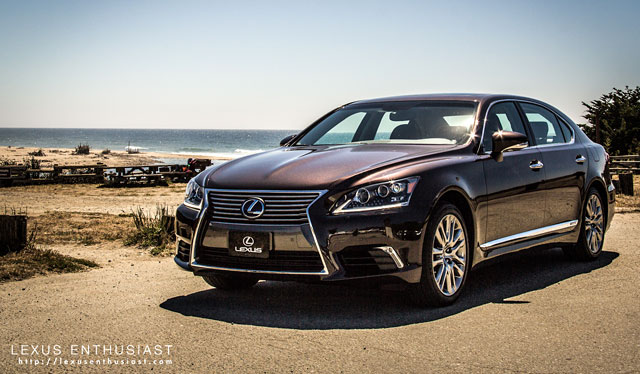 After lunch, it was time for the LS 600hL in Fire Agate — without exaggeration, this color absolutely rocked my world:

Setting off for the longest drive of the day, I turned the Drive Mode Select to Comfort and settled in. The new LS interior is a substantial improvement over the model it replaces — the beautiful wood grain, the massive 12.3″ navigation display and the Remote Touch controller, the all-aluminum dials and controls, the swooping dash, the new steering wheel, all of these things combine to give the sense of occasion expected in a flagship sedan:

My afternoon was spent following a couple other journalists in a LS 460 F SPORT, and this made for an entertaining dynamic once we hit State Route 84 with all its twists and turns. Dialing the LS hybrid’s Drive Mode Select to SPORT+ mode, I did my best to keep up with the LS F SPORT, its driver powering through the corners so sharply I could smell the burnt rubber of his tires.

More than anything else, it was this stretch of road that demonstrated just how much the handling of the LS has been improved — trying to drive the previous LS hybrid in the same way would have been unthinkable. 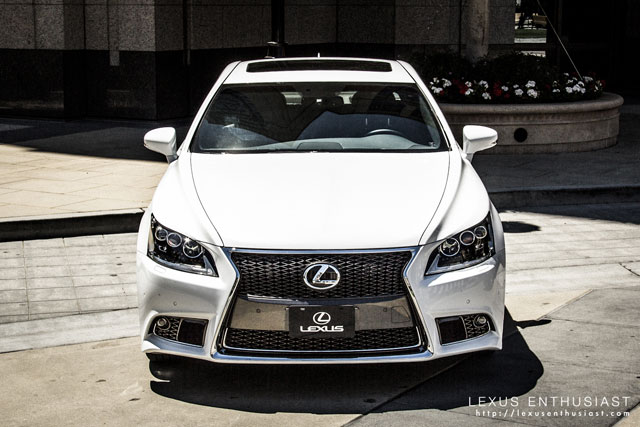 My last drive of the day was in a rear-wheel drive Ultra White LS 460 F SPORT. The afternoon of intense driving had taken its toll on me, and I had little interest in pushing the limits — just as well, as I spent most of my time in rush hour traffic.

Concentrating instead on the interior the LS F SPORT, I took notice of the changes compared to the standard model — for instance, there’s no wood to be seen, but instead the trim is aluminum with a tiny L pattern: 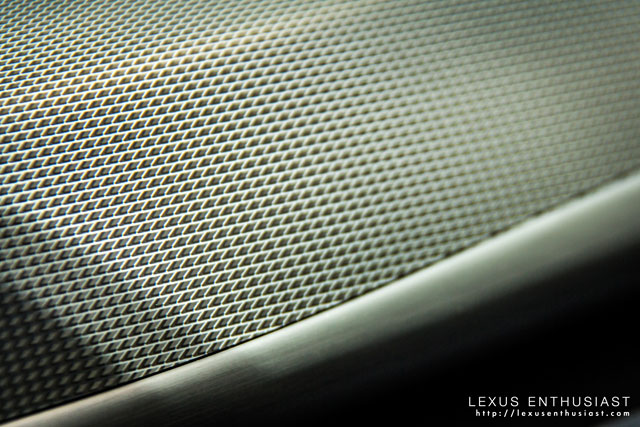 If there’s one complaint about the LS F SPORT interior, it’s the singular palette — only available in black leather, the cabin mirrors the aggressive exterior perhaps a little too closely: 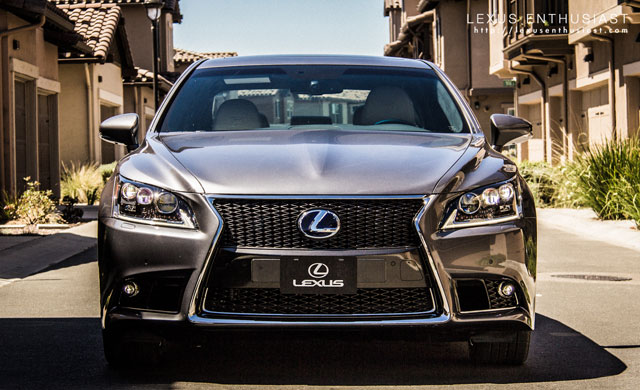 The biggest surprise of all happened the next day, when I had an opportunity to drive the not-for-North-America LS 600h F SPORT.

With no agenda or deadline, I decided to focus on photos, starting with a tour of Coyote Hills Park:

Next was a quick stop in a new housing development:

Overall, there was little to separate the LS hybrid F SPORT from the all-wheel drive LS 460 F SPORT I drove the day before, with one exception — even in SPORT+ mode, the gradual, linear response of the hybrid’s CVT didn’t really fit with my expectations of a Sport model. This is sidestepped nicely by the paddle-shifts and the simulated gear changes, but it would have been nice to see this reflected in the Drive Mode Select settings.

The exterior, the interior, the driving experience — everything about the LS has been refined, and the result is a thoroughly modern and significant redesign. It’s possible to argue the update doesn’t go far enough, that the similarities outweigh the differences, that there should be a new engine and a new platform — and yet, put the old & new models beside one another, and clearly the 2013 LS is better in every conceivable way.

In the end, is there a parallel between the 2013 LS and the Apple iPhone? All you have to do is compare the new iPhone introduced this week to the one it replaces, and the answer should be clear — sometimes evolution is the best strategy.

This ends my coverage of the 2013 LS media preview in Palo Alto, California. Special thanks to Lexus for inviting me to this event.

It seems like Lexus has hit a home run with the new LS. The only complaint I have is the same one you have. What I love about the LS models you reviewed is that the color palette is understated but still elegant. All the colors play off each other beautifully, and there's just enough of the leather/wood/chrome mix. The only exception to that is that LS460 F Sport. The exterior looks beautiful, but the interior is too one-sided. Because of the all-black color, I believe it lacks the elegance that the other LS models have and focuses solely on the sport/aggression theme. Not the right call, in my opinion.

The new LS may be a slight improvement, but the germans aren't making slight improvements. This car needs a MAJOR redesign for 2015, with the new S-Class coming out, and 450 HP Audis and BMWs to compete with. This should be seen as a refresh, not a redesign.  I hope Lexus sees it the same way.  The market will tell them soon enough...... BD

YOUR PHOTOS ARE AMAZING!!!!
Excellent review Kevin! Can't wait to drive one! or two!