Lexus has released a high resolution version of the first official 2013 LS F SPORT photo, which provides an excellent opportunity to examine the new car in detail — let’s start with the LED headlights:

The technical styling gives the headlight an intricate, super-modern appearance that I find very appealing. Also looks like the L swoosh daytime running lights are full LED strips, and not multiple bulbs.

Keeping with the lighting: 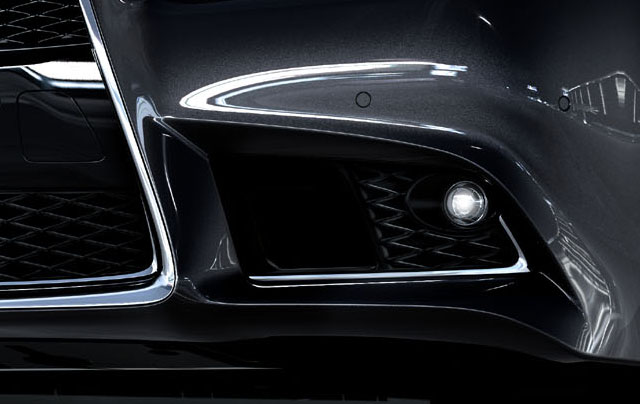 The fog lights are also LEDs, recessed into the bumper in such a way that they appear to cast light onto the chrome strip edge.

Moving on, here’s one closeup that shows off a number of notable factors: 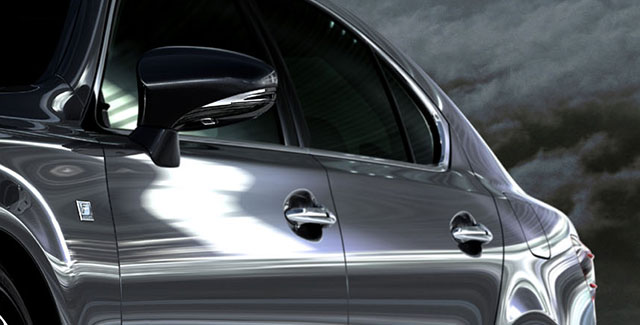 Here we can see the new Lexus standard side mirrors, along with the taillight aero-fins and the F SPORT badge — however, the LS looks to retain the old-style door handles, though it’s hard to complain given the chrome finish.

Being able to zoom in really shows how much has changed with the new LS. The entire front end has been redone — the hood crease, the bulging fenders, every element has been reworked. 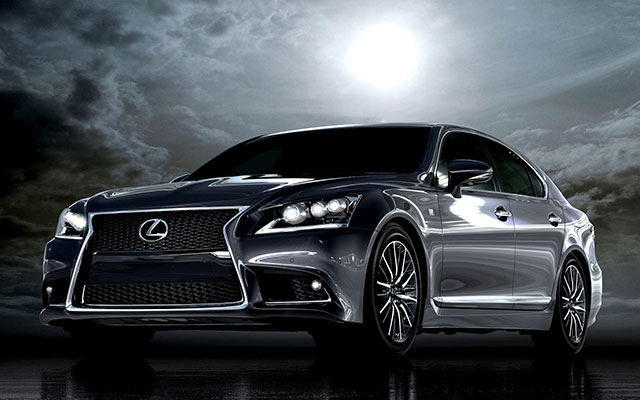 Is there a camera under the new side mirrors? Looks too small to be puddle light.

This is impressive, it's seriously more then what I was expecting, the headlights look so futuristic! Cannot wait to see the interior ..!
Lovin' the chrome!!!
whats sad is that now we have to wait another 6 years for and actual new Lexus LS

This refresh obviously isn't going to last for another six years. The LS would be dead in no time. A truly "all-new" LS will probably come for the 2014/15 model year. Lexus does some stupid things, but they couldn't be that stupid. An all-new LS didn't come due to the tsunami disaster, and all of the production delays associated with it and the whole floor mat debacle.
Well.. The es came out and a possible new model came and is going to come out all new even with the tsunami and mat thing
Sorry for the grammar what Im saying is there are other models that are Comeing out all new even with these disasters
That is only because the development of the ES started before the tsunami.  Also market competition in the segment impacts whether they decide to do a FMC or refresh.  The S Class is going through a refresh and not a FMC.  The 7 series is too new.  Therefore, Lexus product planners feel they can invest a fraction in a refresh versus several hundred of millions of dollars in new powertrain and design R&D while maintaining market share for a few more years.

I believe he is correct about a new dash. If you view the hi-res rear-view pics there does appear to be a massive LCD screen slightly visible. I would be surprized (and dissapointed) if Lexus only focused on the exterior and did not update the interior. If the interior is updated with a new dash and steering wheel, then it would be unfair to call this a mild update. Remodeling a dash requires extensive effort by any manufacturer. I am hoping for a much more affordable Hybrid option, maybe the V6 GS Hybrid powertrain. And a Hybrid that improves fuel economy, not performace. Then make it avaiable at only slight increase in cost ($3K or $4K more).
Correct , the dash is having a HUGE upgrade !

Hello everyone, After seeing the newly discovered photos of the LS last night on Club Lexus, I want explain why I will not be posting them right away. As I mentioned a couple days ago, I have been invited to the LS debut in San Francisco by Lexus. Part of that invitation was an agreement that I would not publish any official information until Monday at 8:30 PT.  These new LS photos were discovered on the Lexus press website by a very crafty fellow, and while I'm very excited by what I've seen, publishing them would go against the agreement I have with Lexus. I will not delete the link to the photos above, and will not remove the photos that have been posted already, but I will delete any newly uploaded images. Thank you for your understanding, Kevin Watts Editor, Lexus Enthusiast

We understand it perfectly Kevin, there's no need to explain us anything. Have fun at that event! You have such a privilege to be one of the first ones to see it in real!

I think this is a very good mid-cycle update.  Given the relatively low sales volumes of the LS I agree with Lexus in their decision to delay an "all new" LS.  Great to see the LED lighting strips (hope they are on the new IS too) and the new design parking sensors.  They now match the Europeans (Mercedes, Audi, BMW) and look much more discreet. Have you noticed how "stuck on" the sensors look on a light colored GS?
Has anyone else noticed that the front fender wells are several inches higher on the front of the car as compared to the back fender wells? It almost makes the front weels look bigger when viewed from the side.
not sure about the rims
The 1995 Lexus LS was basically the same platform and design, with some refinements inside and out.  It wasn't "All-New", and the sales reflected it didn't need to be "All-new" Throwing out a great design every five years doesn't equal success.  The 2006 LS430 NEEDED to be thrown out, and redone.  The current car does not, just because...... Add 20 HP, add 2 MPG, drop weight 100-150 lbs, and put in a great new interior, and with it's unparalleled quality and luxury service, it looks better, IS better than the Germans for years to come And isn't that the point? BD

But , the '95 LS & '89 LS's side profile wasn't that obvious ... this '13 & '06's side profile is too obvious the same thing .
The LS460 is seriously a truly grande vehicle.. Look at how bland the German saloons are, their interiors are typical of low quality and are ergonomically challenged..

did I miss something? I don't see any interior pix. T

Click into the link that "LexVVT-iS300" posted , the rear end post shown little bit of the dashboard & that's not same as the current car .

I don't understand people making complaints about lexus saying this is only mid-cycle refresh? just because have same side profile? Believe me this car will have everything new,just the rear window will be the same. Mercedes Benz doing the same with the new S class,new interior,front and rear. Check spy pictures about new S class please,thanks!

I agree.  The S-Class is not impressing me AT ALL! They definitely played it safe, and the steering wheel is stupid...... BD
I agree..
Again I need to ask. How is the new S class not impressing you when you don't know anything about it? Drive the two cars side by side, THEN TALK.
The rear window only similar , not totally the same , the window shape is slightly different , the whole door is redesigned ... while on 2013 Lexus LS , the door , the window , the whole side , is the same (apart from front fender which change for the headlight) . Even 1995 Lexus LS did side profile update when compare with 1989 Lexus LS .

will the new bumper and grill fit the existing LS460? could i do a front end re-fresh on my 2011?
This is a major facelift.  quite disappointed.
like what they did with the 1998 model
Can't wait to hear what the F-Sport sounds like with the engine sound creator.
love it
Driving the NX 450h+