A teaser of the next-generation 2013 Lexus LS was released in a most unlikely fashion when it was included in a Lexus UK video interview with RX chief engineer Takayuki Katsuda.

Used as an example of upcoming models that will feature the new Lexus spindle grille, the LS was one of four teaser images were briefly displayed: 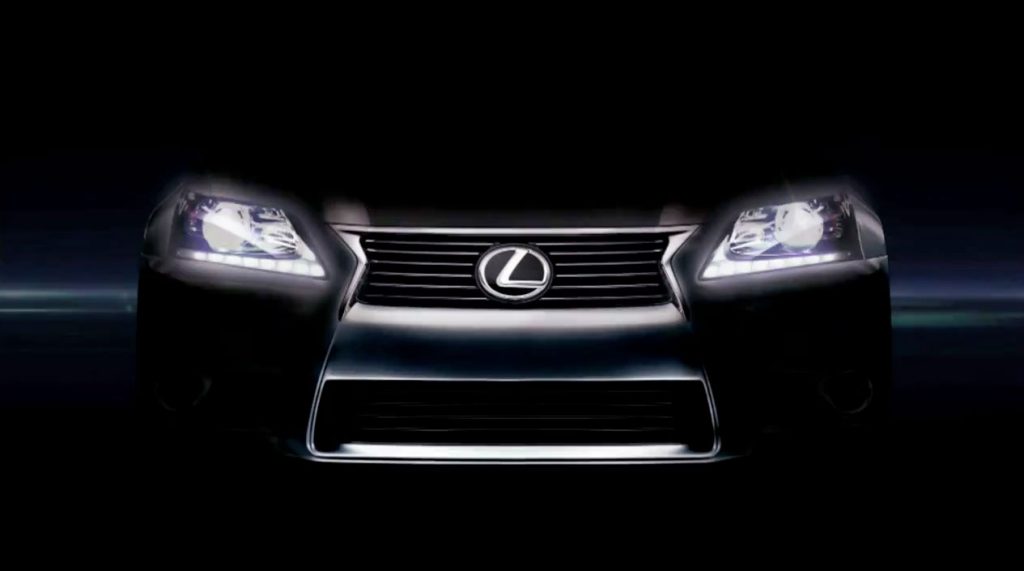 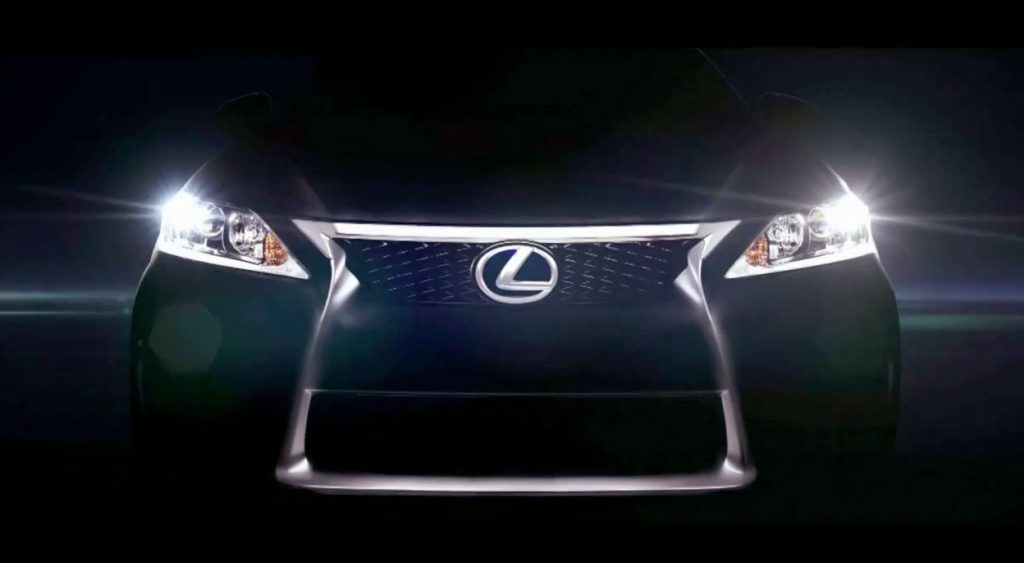 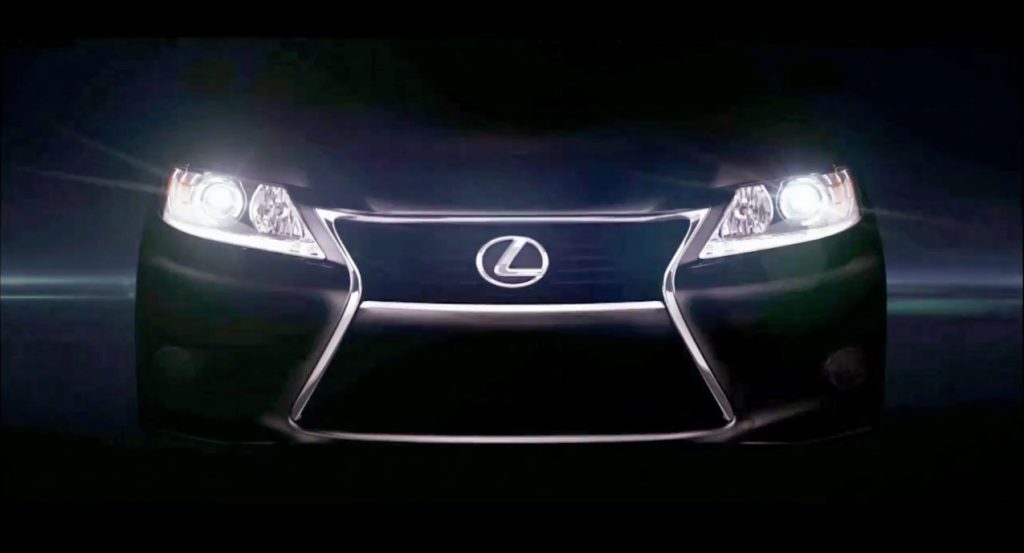 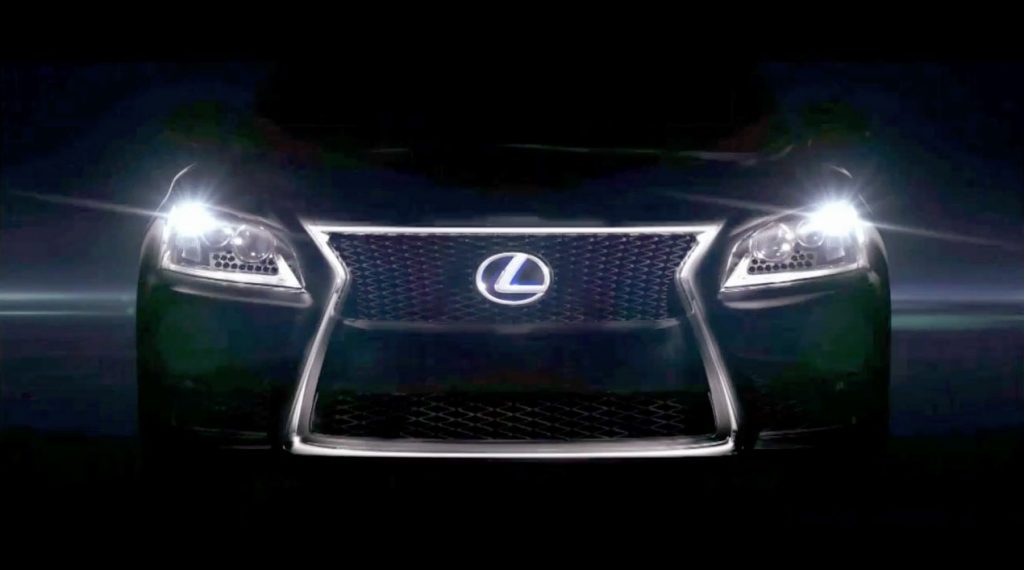 Normally I wouldn’t be so confident about discerning a mostly hidden model, but my suspicions were confirmed by the Mungenast Lexus dealership blog — let’s take a closer look at the LS (click for a larger version): 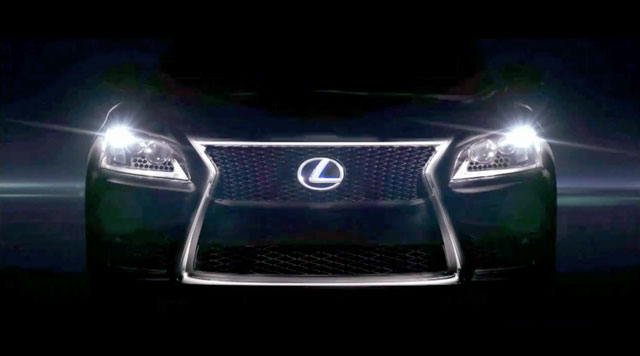 The new LS has adopted the brand’s spindle grille with perhaps the boldest interpretation yet — although it could just be a trick of the lighting, it appears the LS may have a full chrome hourglass shape around the grille.

The only other discernible detail are the headlights: 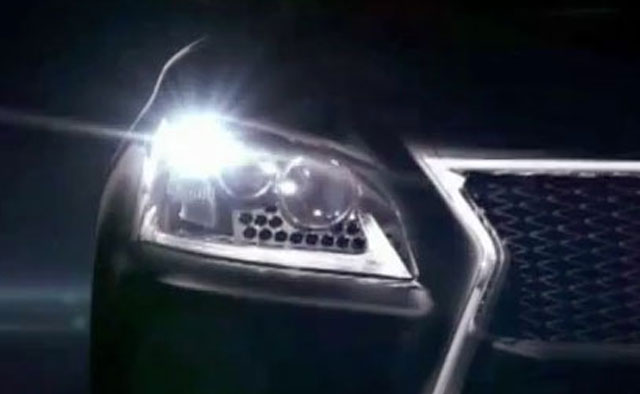 Almost certainly what Kiyotaka Ise, the head of Lexus, was referring to when he mentioned “significant developments where the headlamps are concerned”, the LS headlights are different than any I’ve seen before, and would certainly bring a distinctive look to the Lexus flagship sedan.

Lastly, here’s the video that had the four teaser images:

Update: As jruhi4 points out in the comments, there’s also a teaser of the LX in the video that I missed.

It is the CT F Sport.

The "new" LS is not a new LS.
I'm surprised that no one discovered this beforehand like I did on Friday(especially this site) as it seemed only the Mungenast blog and I knew about it until Monday, yet still no one has seen the non-F Sport/Fmodel LS600h I posted on CL and GCF. That one, instead of this one has the regular grille that will likely be seen on most models.
I know that many customers should hate that Lexus begin to do as BMW or Audi, construct all the range very similar, but I understand this politic in design. For one hand, is to have a strong image of brand, IS, GS, LS very similar. For other hand, can be necessary to have more efficient way to design and construct all the components for their vehicles. I think that my explanation isn't going to convince all the people but well, I think that's the reason. P.D.: I would like that this possible LS is going to have the same interior than the CT and not the GS, because the CT is much more comfy than the GS's and in my opinion, much more stylish.
At first I was against the spindle grill.. But now it looks so nice.. It looks so much better than Audi's stale gaping hole grill..
I've always been a huge LEXUS fan. They make the best  riding vechiles in the world. I can't wait to see the rest of the LS.
Is it me or has it really got the full chrome surround? Because if we look at the CT and 2013 GS, only the upper grille has chrome surround. On the ES and RX, it goes to the bottom, but there is no horizontal strip at the base. On the LX it goes three quarter way down. This seems to get the full treatment.
The upper part is chrome while the lower part is brushed metal.
It also has an aggressive "GS" front type fascia. If you play around with brightness/saturation you see F-Sport grills side vents similar to the F-Sport GS body kit
I just want to see a great render of the next generation LS now that we know what the front will look like.  Hopefully someone very talented will create a realistic render and post it soon.  I have scoured the internet and cannot find a good one.  Thanks in advance to any takers.

This is ofcourse the new IS 300HYBRID. Looks really promising!

Looks like the current LS with a nose job to me!
Because it is.
Too luxurious for the entry-level sedan. This is the LS, no doubts about it.

My predictions on what The Next LS will be: 1.  The styling up front we've seen.  The rear end won't copy the new ES/GS, but will be similar.  The area between the A and C-Pillars, the "greenhouse" won't change much at all. 2.  Interior materials will be upgraded, and interior volume will grow slightly, without much change to the wheelbase/length.  Similar to what happened with the Toyota Camry and Lexus GS. 3.  5.0 V8 from the ISF will be used, but tuned to 400HP, torque increased, and the engine note/high-revving nature neutered.  LS500 becomes the name. 4.  The hybrid loses AWD as a standard feature, and loses weight overall by over 400 lbs over the LS600hL.  EPA MPG:  25/30.  Power goes up slightly to 450HP. 5.  Weight will hover around 4250 for the LWB LS500, save 100 lbs for the base car.  The hybrid will come in around 4500 lbs.  AWD model about the same. 6.  Car gains displacement, about 20 HP, and EPA economy goes up to 18/25.  Lighter weight is a benefit here. 7.  Sport Pkg is optional, but a new LSF model adds a turbo-charger to the V8, taking power to 550HP 8.  Price for car will rise significantly, becoming similar to the Germans.  SWB starts at $75k.  LWB starts at $80k.  Hybrid price drops to around $100k.  LSF is $130k. If Lexus is really "bullish" on the hybrid, they should consider having the SWB "base car" be the hybrid model, at $75k, and the LWB be the standard V8 only, starting at $80k.  But then the power would be similar to the ICE V8, not superior. BD

You're basically wrong on all of your predictions.
Said someone speaking from experience..... BD
No, just someone who has facts.
sooooo basically nothin but the grill, headlamps,rear, remote touch and interface updates are added or changing? the interior wouldnt match any of the newer models like GS or ES, it doesnt sound right i mean shouldnt the LS be the flagship leading in tech style and size within the brand not to mention the germans ?
But hasn't presented any...... BD
James, we all want to know what you know. Prove us wrong showing up your facts and sources.

This would definitely be the new LS Hybrid or LS Hybrid F-Sport. You can tell by the Lexus logo which has the distinctive hybrid blue outlines and the traditional triple LED low beam headlight setup. I posted these pics on another site about a week and a half ago. I wouldn't be my life on it... but to the person claiming to have inside knowledge of the upcoming LS, I don't see how your comment makes sense. I have lightened up the photos, and you can clearly see this isn't the same sheet metal. The car is wider, has a more sculpted sportier look, and is also a lot more aggressive. I didn't like the headlights at first sight, as they seemed kind of boring as compared to the current generation, but now I really like them. Adds character. The first pic is the original sized photo and the second is a blown-up copy. Both images have been enhanced. You can even see the outline of the folding side mirrors and also the area where the foglights would typically be. They don't appear to be present on this model. Instead, there seems to be the same sporty mesh that's found on the grille. Further proves this could be some sort of LS Hybrid F-Sport.

I like your perspective on this, but I hope you are not insisting that you posted these photos 1.5 weeks ago, if so you are not being honest and possibly lying. There was no trace of images from this LS teaser until March 14th when Mungenast posted them(the NAIAS wall display is where a small, barely visible inset of this car was even last seen). Even then, there were no secondary postings nor commentary until I uploaded it. I was the next person(Carmaker1/CMK1) to snapshot this image, even comment on and post it at ClubLexus on March 17th. Suddenly afterward, news came about it on March 19th from here and everyone else(websites) followed. I suspect somehow both my own contribution and Mungenast's blog are responsible for this information spreading around quicker, as no one else seemed interested in Katsuda-san's interview and knew about it. These images were taken in December 2011.
I'm not a mathematician with a degree from Yale or Harvard, but doing the math using the dates you posted (dates I was already aware of since I follow several Lexus fan sites on Facebook and I specifically remember the date the original video and photos were posted) which were from this original article posted on the 14th http://lexusstlouis.net/2012/lexus-uk-teases-new-es-ls-models-in-geneva-motor-show-video/ ... that will equal just about TWO weeks. I stated a week and a half ago. The link I posted was in its self posted on Facebook on April 15th and I commented on the link at 4:35am EST as evidenced and proven by the following link http://tinypic.com/m/fk2q1z/4 I uploaded. I posted a thread about the new LS on an automobile fan site on March 18th. That was nine days ago. I first found out about the supposed new LS on April 15th. So now we're talking about 12 days ago. Exactly WHAT are you refuting to my chagrin??? You wrote me a thesis statement of essentially irrelevant information that has absolutely nothing to do with my situation. I love self-righteous jackasses who swear to God they have one iota of what's going on and that they're proving someone wrong, like they are some Nancy Drew of the internet world, only to end up looking absolutely and utterly stupid due to them not being able resist the urge to mind their business. Next time, princess, before you want to write novels to people calling them out... make sure you have some concrete facts so that you don't end up with expired egg all over your face. Are we about done here, sugarplum. I think enough keystrokes and my valuable time have been wasted, although I do love making people look like the absolutely douchebags they are.
Not sure what the point of all this is -- I don't think it really matter who found what.  I linked back to the original source and the Lexus St.Louis blog that confirmed this was the LS in my post. Let's leave it at that.

I didn't even notice this one extra thing until further inspecting the photo. In my enhanced image, you can also see what appears to be the general outline of the traditional foglight area. I have further lightened that area to make it more visible. See how large the mesh-covered area is, in my photo? This really looks to be some LS Hybrid F-Sport model, much like the GS Hybrid F-Sport.
Ok, all done with this. Thread locked while I sort this out.
Driving the NX 450h+