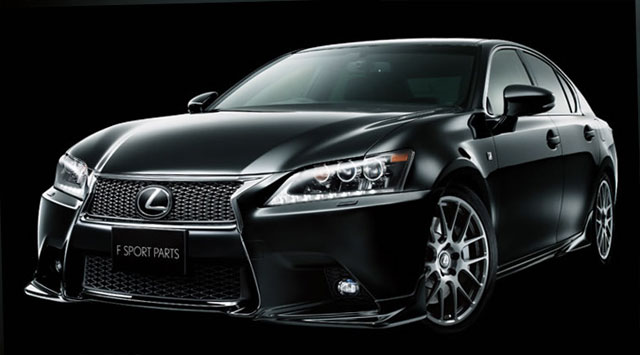 The 2013 Lexus GS went on sale in Japan earlier today, and newly developed TRD Japan parts were revealed as part of the launch — here’s a look at the aero kit, which is made up of a front under-spoiler, side skirts, a trunk spoiler and a rear diffuser, along with a quad-exhaust sports muffler:

As to be expected, TRD Japan parts are not cheap (set of four wheels: $6,574 USD), but I can’t help but be impressed with how well the parts integrate with the overall look of the GS. At this time, North American availability is unknown.

Finally foglamp on F-Sport bumper ! Wait ... is this what the last time we saw a F-Sport GS350 that drive in disgust ?

Foglights are standard for the F-Sport version outside the US.

TRD, how I love thee. Steppin their game up nice these are wet!.
There is the Modellista version here: http://www.modellista.co.jp/product/gs/index.html

Like many people, i really like the new GS particuarly the F-Sport version. However, a GS460 F-Sport (TRD kitted) would have really made my day.
Might be a good idea to mention it's "TRD Japan", that has released these parts for the JDM Market. I'm sure the USA Market will see some possible "F-Sport Accessory" parts released eventually.. Coincidentally, the F-Sport parts for USA are developed with TRD USA... ;)

Speaking of F-Sport, one of the previous extensions of the F-Sport accessory line coincided with the 2009 Chicago Auto show (see http://my.is/forums/f44/lexus-f-sport-accessory-line-expands-its-reach-381474/ ). Although I have NOT heard anything like that for the 2012 Chicago Show next month, I can't help but wonder if history might repeat, to roughly coincide with the 4th-gen GS launch...
Duly noted -- I've updated the post.

MG, Thats just ugly. Hope no one puts this plastic-crap on their GS.
I like this! But I would like to see a kit like this destinated to Lexus CT... Is going to be nice and comparable with a M Motorsport of BMW or S-Line of Audi.
Leaving  the looks in the middle, TRD japan parts are usually priced off the planet and very hard or simply not to get access too. I do not know why a organisation like TMC / TRD is, on one side, keeping a accessory program alive and, on the other side, killing its own sales possibillities ? I have tried for years to get my hands on all sorts of Japanese TRD engine parts etc, absolutely no result or you if I had I was charged over the head. Dealing with TRD USA was a very different story, pricing was not cheap but also not ovr the top and the company / organisation was reasonable accessible. Happy to deal with. Ofcourse development has to be paid for but charging those ridiculous prices like for a set of wheels that basicly have a alloy mix price per pound + tooling fee is not right.Ill think its due to a difference in culture. Happy to pay for good and exclusive quality but not to be taken as a fool.
Finally, Lexus is embracing the aftermarket world a little more. Sure its baby steps but this is a step in the right direction. Lets hope these parts make it outside of Japan as Global F-Sport Accessories for all the markets.
Is it just me or those quad exhaust are really tiny? I mean doesnt have to be enormous but, maybe a bit bigger would make it more aggressive.
really liking the rims.  Does anyone know if lexus will be offering the F sport package, as accessories that you can add on... (ie like the rims)
Whats up with this, is it just me or does the GS which is suppose to be a decent stop up from the IS looks just like the IS.   I mean yeah its sharp looking but some more distinguish between models
The suspention and the wheels... thats all that needs to be done