As previously mentioned, TLE reader Shamiz sent over a bunch of cellphone pics from an unnamed Japanese car magazine, and among the images was this rendering of a possible Lexus GS-F:

I really hope that Lexus tries to incorporate the LF-Gh’s giant grille with the GS-F, even if it’s as simple as blacking out the dividing bumper. In fact, let’s try that quickly: 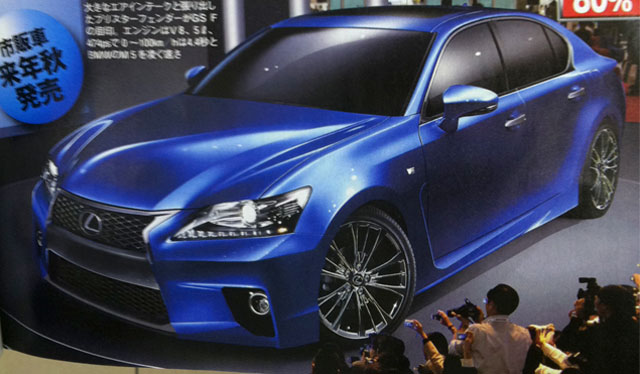 In designing the GS-F, I’m curious how much will be taken from the existing IS-F — and even more specifically, I wonder if the front air vents will be carried over to the next generation of F-marque models. They’re certainly a large part of the current IS-F’s visual identity.

Along with the photo is some speculation that the GS-F would be powered by the IS-F’s 5.0L V8 engine, with output bumped up to 467 HP — but considering the new BMW M5 is packing 560 HP and the Mercedes E63 has 550 HP, I have to think that 500+ HP needs to be the target. Of course, it’s all speculation at this point.

What do you think of this GS-F photochop?

(If anyone’s interested, I’ve included the full magazine page after the jump.) 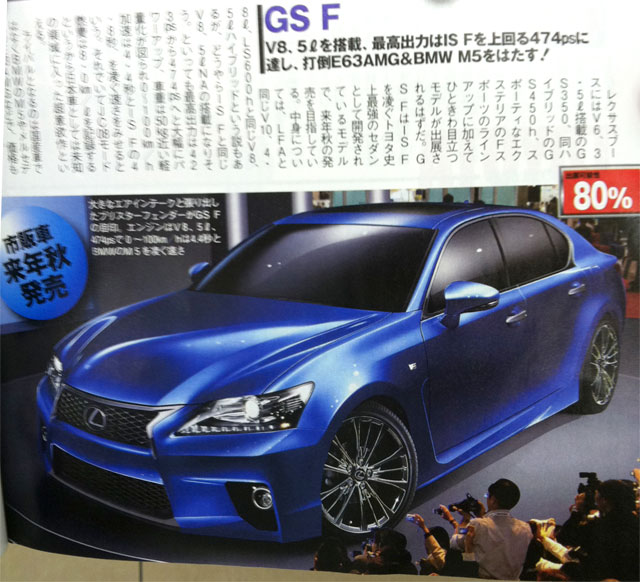 Now thats a clean photochop! delete the fogs, raise the hood a little bit with two vents and blackout the entire grill and there is an M5 killer!

500HP is the minimum It is lighter than the others BD

I think those fog lights are a little inaccurate. The ones on the teaser image of the GS F-sport look different.  http://lexusenthusiast.com/2011/08/20/2013-lexus-gs-f-sport-gs-450h-teaser-images/
Very cool with the black bumper....
650 hp plz,jizz in my pants
I greatly prefer the second photo with the more pronounced spindle grille. I think a GS-F should be equal or better than the Germans on power and noticeably lighter.
I agree with numerous that post here.......need 500+ power.....the fog lights are too common to me...they need to be more unique and different too.....maybe something non circular to set design apart.....and finally the all mesh blacked out grill is so awesome from the concept.....this would set this car apart from the other models and it would be worthy if the power and cost differences that consumers expect with a sport variant. I personally think the bar blackened out between the grills is not enough.
Yes plz.    This car will be awesome. Plz make a GS-F Lexus.. it is only right that you do
Look's a little bland, something is missing or maybe needs to be a little more aggressive.
I would have loved to have seen what they thought the rear end would look like with the GS-F model! Maybe a set of four rectangular exhaust tips?
IF Lexus does produce the GS-F (and they really should), I think they will do a much better job. This photochop is a good effort but I don't think it's a near enough representation. Lexus is changing the style of the L-Finesse design language. Little from the IS-F will be carried over, I reckon. I'd like to see something different from the gill on the side. It doesn't look aggressive enough. Would like to see someone photochop the rear as well - that'd be quite interesting.
Since Lexus GS doesn't have light body like Jaguar ... I don't think 470hp is really enough .
Driving the NX 450h+