Here’s something interesting: Australian website The Motor Report was sent images that are reportedly from a Lexus Australia customer survey meant to gauge interest in the next-generation GS — the images look like screen captures, and show both the standard and F Sport GS in multiple colors:

Here’s the funny thing — the standard GS shown in these images were actually photoshopped photos from Theophilus Chin, the very talented photochopper. This means one of two things: someone tried to trick The Motor Report with fake info, or these images were accurate enough that Lexus Australia could use them to illustrate the new model.

Personally, I’m leaning towards the second option — there’s something about the screenshots that would take some cleverness to create — and if this is the case, it makes the F Sport GS rendering all the more interesting: 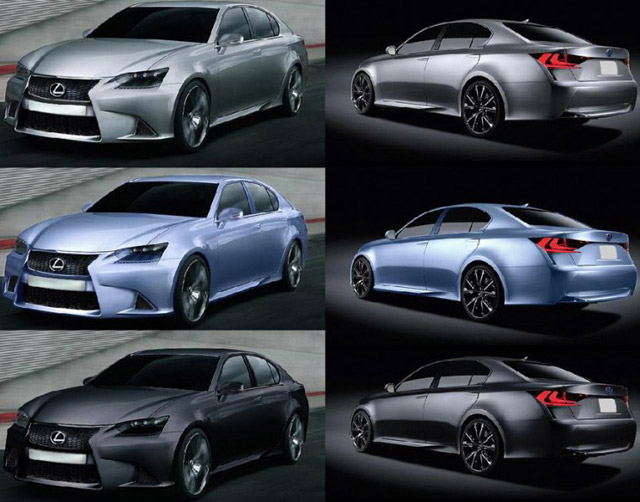 That the LF-Gh concept was modeled on the high-performance GS variant is no stretch of the imagination, and this rendering would seem to confirm that. Beyond that, not much has been done, other than the full front bumper and the massive wheels — I don’t believe this is a full representation of what the GS F/F Sport model will look like, but it would definitely point in the right direction.

Update: In my haste to hit the beach with my family, I actually forgot to add the photo gallery. How embarrassing!

Update 2: I’ve since verified that this was an official Lexus Australia survey.

Both headlight and taillights is too Concept-ish for Lexus ... this isn't an Audi .
the last black GS looks great!! let the Lexus logo shine!
This concept looks extremely disappointing and unappealing, the front of the car is aggressive but the rear looks rather hybrid like, especially with those tiny exhausts, looks very unbalanced. Also, the front lower grill just looks plain ugly and seems like they just copied the concept from a E92 M3 and modified it. I definitely would not like to see the new GS or GS-F to look like this. The car looks like its jaw dropping, this concept car saw itself in the mirror and jaw dropped by it's robust unbalanced look.

I think it looks awesome... show stopper... put this side by side with the new current 5 series.. people wont notice the BMW.  I do agree about the rear... the front looks super aggressive... then that doesnt translate to the rear of the car. The front is no less then awesome. The 1999 GS400 was agressive... im glad lexus is going back to that.
I would say this is just a rough approximation, I imagine the final product will look quite refined. It is a Lexus, after all... ;-)

awesome find
Autoblog has it up too

Could this be nearer the truth - http://www.topspeed.com/cars/car-news/spy-shots-2012-lexus-gs-shows-off-its-lf-gh-inspired-grille-at-the-nurburgring-ar112526.html?utm_source=twitterfeed&utm_medium=twitter
I LOVE THE FRONT OF IT !!!!!!!!
In my haste to hit the beach with my family, I actually forgot to add the photo gallery. How embarrassing!  Post now updated.
what count in the GS-F is whats under the hood...looks nice not liking the rear too much though
I like so much this LF-Gh prototype, but I think it can change a little when is going to be sold. I want to see a familiar version of this model. I think is going to be so nice this, at least here, in Europe.
Just another update -- I’ve since verified that this was an official Lexus Australia survey.
I would definitely get one!! Only reason that's stopping is my mortgage payments LOL