Another day, another set of photos featuring the black-clad 2012 Lexus GS that’s cruising around California — only this time, the photos were taken by TLE regular World of Luxury!: 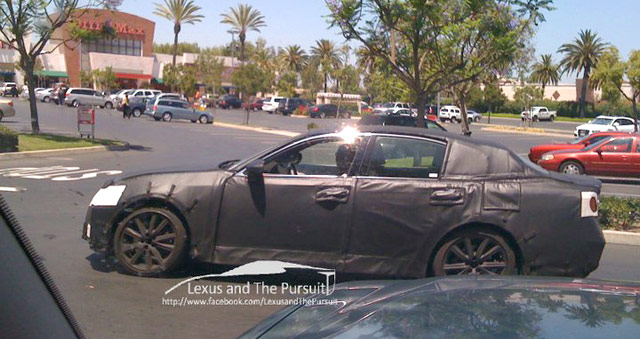 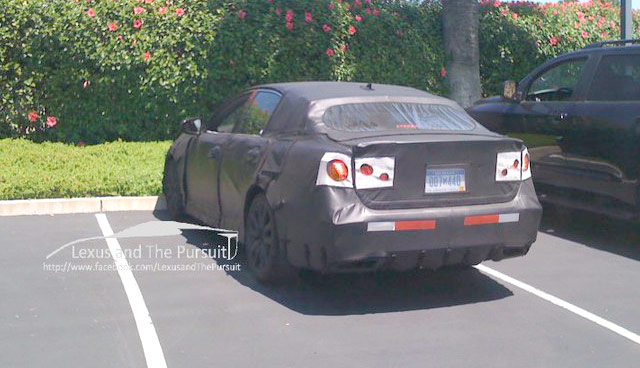 The last photo gives a clearer view at the integrated exhausts, but the big news is the photo of the front-end — let’s take a closer look with a comparison to a flipped LF-Gh: 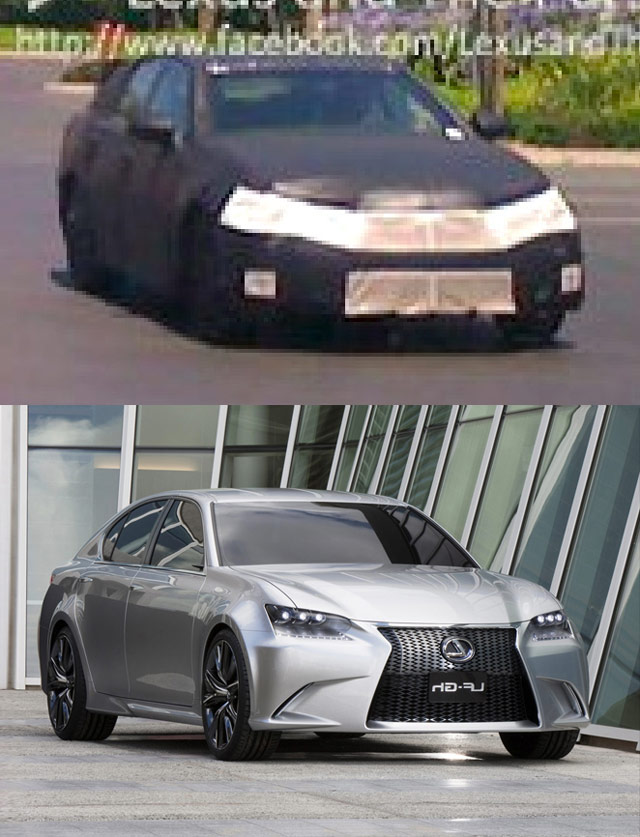 This is our best indication yet that the production GS will have a bumper split through the upper and lower front grille — it also looks like the grille itself has been downsized slightly, and of course, fog lights have been added (which appear similar to the ones seen on the CT 200h).

I'm flipping out over this.... Lexus pus so much camo on this car.. thats a sign its epic and a big change for Lexus. The front end is really gettin to me.. If u look close you can see the nose of the covered car have a big dark area... i would say that the new Lexus grill thats on the conpect
Woot! This is sooo cool!!! ahahaha
I want that I want that I want that I want that!
Taking the liberty of make slight alterations to that much-used Star Wars catch phrase: I´ve got a GOOD feeling about this!
I realize one things ... even it's covered by a huge stuff , but the front end looks like having new grille , which looks like the concept one ... I doesn't quite happy with that because it looks like Audi clone .
guys i just have to say there is nothing between that grill,,,im so exiited ,,omggg  yeessss,,
My husband  Larry won a  Lexus Suv from Valencia Lexus for aweek ,we love the way it drive's and look's., I wish i could buy it right now.  My granddaugher Haley love's riding in it. The people at the Valencia dealership treated us like gold.  Thank's Lexus of Valencia. Nanette

WOW! That's amazing! I've only heard of test drives in which you could keep a car for a weekend, but the economy hasn't gotten to a low enough point for that to be mainstream /:
Sounds like a nice contest to win!
how about taking the camo off this lexus gs and showing us the actual car that is going to be sold on the lexus lots at the dealerships. enough of the teaser shots of this car. i work for ray catena lexus of monmouth new jersey. the lexus gs is my favorite car and i would really like to see what the new one is going to look like.. i went to the new york auto show and saw the car only the outside of the car concept. the car was on a spinner so you could not even see any of the inside of the car.. please get back to me if there is any new news on this lexus gs. thanks craig ross.......

It will sure be a looker. A mix between the concept and the ct200h is actually not bad and i think the interior will have the quality bits of a BMW. Now the only thing that is missing is the ability to drive like a german sedan. Id like it to take on the 5 series, A7 and Merc E class in driving dynamics.

Sorry but the current GS has a far superior interior compared to the new 5 series.. If the next GS even slightly resembles 5 series then that's a step backwards for Lexus
I agree, as I own a current shape GS300. Some of my friends have mentioned the interior looks even better than the LS460. Its far better designed than the new 5-series interior which looks like a clone of the 7. Lexus shouldn't take inspiration from BMW interiors, as they suck more & more these days.
Not a fan of BMW interiors at all -- or the exteriors, for that matter. Audi on the other hand...
yeah i like it from side view and i love it from rear  but front need something , if they make it a mix with CT it will be a winner
aha I was hoping that it will be a lot more than the CTh.
Reckon GS looks better than the standard CT. But the F-Sport version is so sexy!
No doubt it will be mixed in with the CT, but it's also sure to have some of that LF-Gh personality as well.

interior pics asap !
Great job, WoL, looks like you were in your LS400 when you took these shots. Coming to the GS, from the 2nd photo it looks like the car isn't that long especially when compared to the E-class & 5-series. I was hoping the new GS would have the concept's LED foglamps but doesn't look that way. Anyway we need to see the interior before the world ends!!
i really think that the year 2012 will be great for lexus. specially , because they learned from there previous mistakes , therefore hopefully we will get better product .
so when is the RELEASE DATE?

Can't wait for it to come out end of this year?   And If they have improved the Hybrid model to have a much more reasonable trunk space I'll definately placing my order...
there is no way this car is coming out in january 2012 krew is there? that would be in six months and they do not even have a actual production car to show to the lexus customers. they are covering up this car all the time. i would think at the earlierst that this car would come out is may 2012... where did you here january 2012 when lexus can not even show the public a actual car or any interior pictures at all. they said they would show more pictures of the interior and exterior at the austrailan auto show july 1-10.. but i donot see any more then i did when i went to the new york auto show..please get back to me on this matter when you get any more information on this new lexus gs. i want to know if i should wait for this new gs to come out or just buy a brand new 2011 lexus gs model. thanks krew just get back to me when you know more info on this new gs then i do thanks craig ross........
Driving the NX 450h+