After taking another look at the recent spy shots, I’m now convinced it must be the 2012 Lexus GS under all that camouflage — here’s a better comparison shot with the LF-Gh concept (plus a little photoshopped perspective in the spy shot): 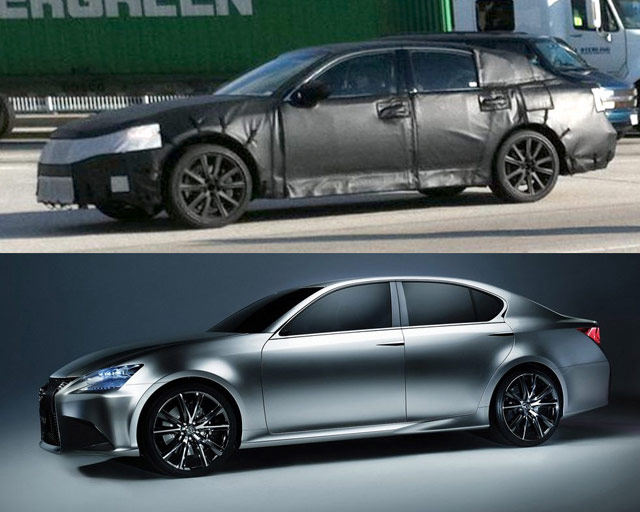 Most obviously, the side skirt is identical, along with the rear window shape, the wheelbase, and overall profile — in fact, looks like the LF-Gh’s entire side profile has been carried over into the production model. As well, taking the wheel gap into account, we may be looking at the AWD variant.

Any differences are hard to spot with all the camo, though it does look like there’s a full bumper across the front fascia rather than the open grille design seen with the LF-Gh.

Finally, let’s look at the rear photo again with a better comparison shot: 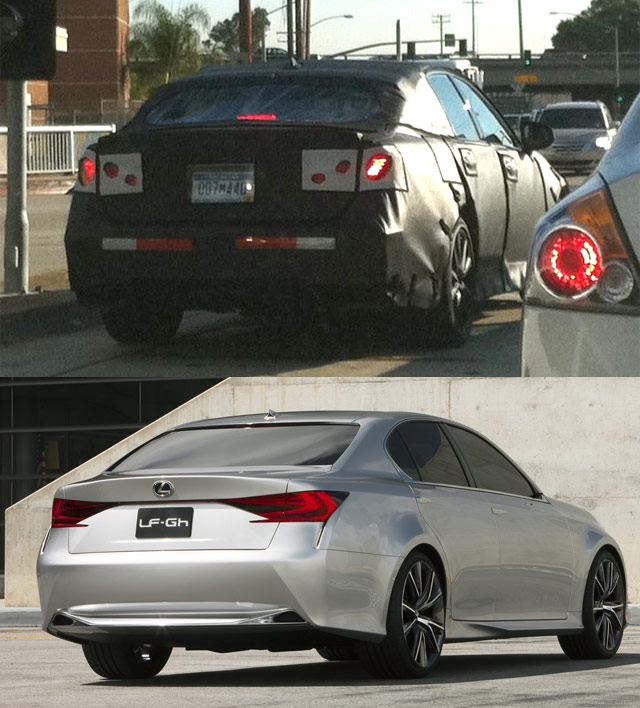 From this shot, it looks like the car’s greenhouse has been made taller and the rear lights have been changed, but it appears the concept’s integrated exhausts have made it to production.

Of course, this is all speculation based on some grainy photos of a car completely covered in camouflage — any & all impressions should be taken with a grain of salt.

This ... is pure perfection !
Awesome! Did you get any closer shots of the front end (even if they're blurry)?
I often find myself in a situation without my little Lumix or Nikon when I need them the most!!! All that you can see in the linked photo album is what I got. The tester drivers didn't seem to mind - looked sort of like they wanted the attention because everything important was probably already revealed or covered. I didn't bother walking up to them and simply drove past them and later waited for them to drive by. I think that they least expected a guy in an LX 470 in a quiet towne center to be snapping these pictures!
Thanks, WoL -- I'll certainly be featuring your hard work as soon as I get a chance. :-)
Thank you! I've enjoyed following your site all these years! I've saved all the maintenance pictures! :P
Awesome opportunity! Thanks for the pics
Thank you! Like you said, it was one heck of an opportunity!

aha For some weird reason, I didn't feel like I had the guts to! There was the mule and the big Sequoia next to it. Could I have run to my LX and driven off? (Looks like it is quite a convenience how the car automatically locks when I shift to Drive aha)

What a long snout! What happened to small overhangs?

Isn't part of the issue with the European pedestrian safety laws?
WHY OH WHY?! I guess I should appreciate it... sigh.

Ugh ... overhangs look huge :(
This new GS might just give Lexus want they want, being #1 in the midsize luxury sales lead.. The segment the GS is in is Lexus weakest segment..

I'm not all that impressed with the BMW 5-series or Mercedes E-Class (though I am a fan of that car's front-end design) -- this is a good time to be introducing a new model to compete with them.
I think the current GS is too 'soft'.. The question is has the GS ever lead that segment in sales? Past generation GS's?

Do you think that the concept LF-Gh is going to be the restyle or the model which is going to replace the GS? I'm asking this, because I see the ES model and HS, and I think it can be the same model, so that's why I though that this concept can replace one or both models. Although, I also think the GS and Gh can't convive, but I see that are two different concepts of cars, the motor of GS can be petrol and/or/not hybrid and the LF-Gh can be only hybrid... And also the style is different, is with the L-Finesse design... Anyway, I wanna see this model in action! =)
Just what the line up needs, more agression in styling and more engine variety! Next GS is coming out as a 2.5 as well as 3.5, V8 and Hybrid.... Cant wait!