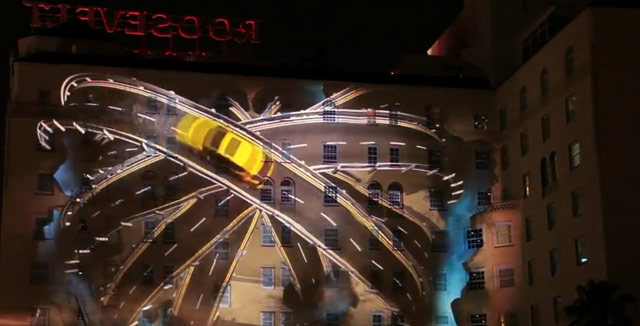 Two weeks back, Lexus created a stunning CT 200h promotion using 3D projection technology and the Hollywood Roosevelt Hotel as the backdrop, and now thanks to Media Life magazine, we can find out exactly how difficult this event was to pull off:

It took several months to get the stunt ready. Pearl [Media, the company responsible for the projection] had to map out the entire façade of the building, including the measure of every curve and arch.

The final project employed 16 projectors, each weighing about 400 pounds, producing a total of 240,000 lumens of light shining on the Roosevelt. The equipment was set up on the roof of a garage just south of the Roosevelt, and it took more than two dozen people to operate

The amount of equipment is hardly surprising when you consider the scale of the display, but syncing up all those cameras must have been an extremely difficult project. Here’s a video from the event, just in case you haven’t seen it yet:

I’m so impressed by these displays — can’t wait to see more of them in the future.