END_OF_DOCUMENT_TOKEN_TO_BE_REPLACED " /> 2012 Lexus GS Spy Shot? | Lexus Enthusiast
Menu
Log in
Register
You are using an out of date browser. It may not display this or other websites correctly.
You should upgrade or use an alternative browser.

Don’t know if it really classifies as a spy shot, but today on Twitter, Lexus Europe posted a photo of two cars under tarps, and mentioned that vehicle and dynamic development engineers would be driving around the UK — wonder if we could be looking at examples of the next-generation GS:

From the profile of the left car, it has that third-gen GS shape, but the front grille of the right car shows a more prominent nose. Reminds me of the LF-Ch/CT 200h: 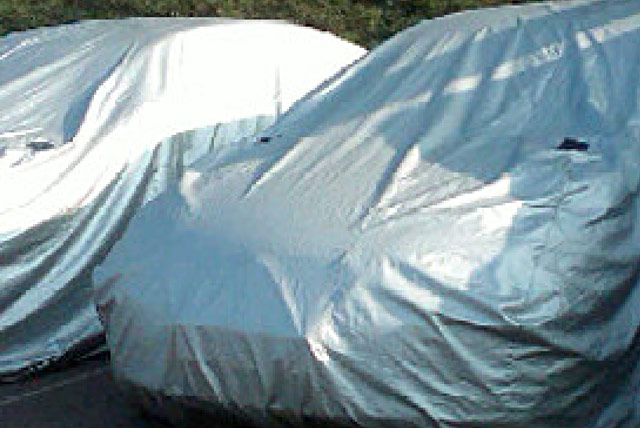 Of course, it could just be the two previously seen mules or not even a GS at all — it’s pretty tough to glean much from two cars under cover.

OMGOMGOMG!!! It certainly is a Lexus! But OMG! I want to know what the final product is! SO STOKED!
Hmm ... Left one looks like a GS ... The right one looks NOTHING like any current lexus. Maybe baby its a baby RX?? (a la x3)

Im guessing baby - RX becuase it has a RX-style grille, but the shape is different (smaller/lower looking)
I didn't even consider they could be different models! Still, they look pretty similar to me -- the right one's hood does seem to bulge a bit more, but the front ends look identical.
They do look somewhat similar, but imo, the one on the right is taller, both the roof and the grille/hood. Also, I think its windshield looks more upright than the one on the left.
I don't know if it's a trick of the light, or if the right car is just further ahead in its parking spot. That would really be something if it was two different models!
It seems the vehicle on the right has a shorter & higher hood than the "phantom GS" on the left. Can we speculate... maybe a 5-series GT type GS variant for Europe?
Ugh, let's hope not. If anything, I hope it's a smaller RX.

Why on earth would the new GS look anything similar to that photochopped CT200h?! Why would Lexus' nearly most expensive model look anything like their cheapest model? Doesnt make sense at all...
Yes , I would hope they created something that looks ... better , than that picture for example , it would be better . And , I hope they keep the soul of the GS ... 4 headlight with 4 taillight .

Aluminum marshmallows... If I say more, they have to shoot Paul.

Well, we wouldn't want that!

How do you kno their even from Lexus ??

Darn those spy shots! :) I can't stand the wait!!
I wish I was there I wouldve ran and removed the cover really quick and took a couple photos...lol!!!!
those are cars are the DECOYS for Auto Spies while they test the REAL GS somewhere else...LOL....just thinking....

i thought of that too

You guys are funny, talking about how it looks like underneath the covers. It could be anything. All I see are two covers, nothing more.

Maybe the underneath have nothing but a box ... or maybe there's a production car laying under it , the shape of the cover (after covered up a car) could show the shape (sort of) of the car .
Honesty is good ;-)

Are those banana peels under the cars?

No, those as towing straps for hauling the cars onto trailers or flat bed trucks.

I don't know -- it's possible that it's a different model, OR it could just be closer to the camera. If only the tarps weren't in the way. ;-)

It might be possible that the one on the right is being elevated.
Driving the NX 450h+