END_OF_DOCUMENT_TOKEN_TO_BE_REPLACED " /> Next-Generation Lexus IS F? | Lexus Enthusiast
Menu
Log in
Register
You are using an out of date browser. It may not display this or other websites correctly.
You should upgrade or use an alternative browser.

Along with their photochop of the next-generation Lexus IS, Best Car also tried their hand at the future IS F (click for a larger image):

From the Japanese blurb, it looks like Best Car is suggesting the engine output will remain unchanged in the next-gen IS F, which is something I doubt very much. It wouldn’t surprising to see the IS-F powered by the same 5.0L V8, but there’s no way it doesn’t get at least a minor power bump.

As with their 3G IS image, this 2G IS F photochop doesn’t show much in the way of progress, though I’ll admit there’s something about the front-end design that’s appealing.

Last up in our Best Car round-up is this rendering of a possible IS F Convertible (click for a larger image): 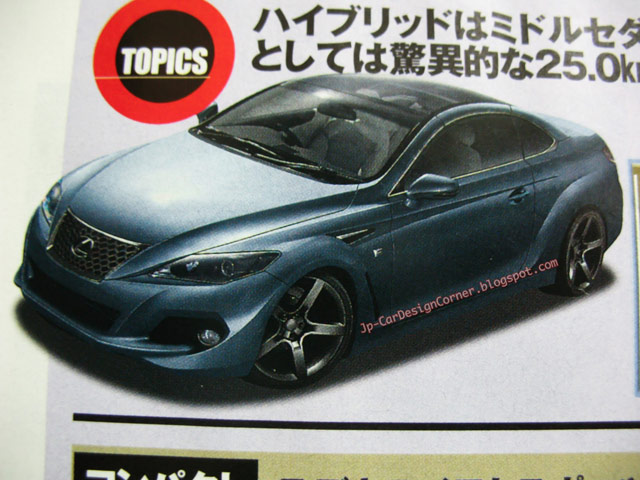 This is probably my favorite of the three photochops, though it’s likely because I’m a sucker for panoramic glass roofs. Again, I like the sculpted front-end, though it all cases there’s far too much “concept car” in the lines.

(The idea of an IS F Convertible is interesting, but it does lead to a dilemma — what to call it? The IS FC?)

back end is so ugly
I am a big fan of this "concept"! i would really like to see the back end though. Any pics of the rear?
The ISF looks pretty darn good----the lack of LED running enhancement lights is a huge miss. LEXUS needs to come up with an original arrangement for running lights that no one else has copied or jumped on the band wagon with-----even Ford's mid to low range models have decent looking LED lihgts. Now is the chance to do something totally different and show some boldness.
The current ISF is complete badass... matching the M3 track time on car and drivers lighting lap... The next ISF is going to be sick.
Wow! Thats really an awful design.

MIKE DELORCA wrote:The ISF looks pretty darn good—-the lack of LED run­ning enhance­ment lights is a huge miss. LEXUS needs to come up with an orig­i­nal arrange­ment for run­ning lights that no one else has copied or jumped on the band wagon with—–even Ford’s mid to low range mod­els have decent look­ing LED lihgts. Now is the chance to do some­thing totally dif­fer­ent and show some boldness.

Yeah, me too. I dont care if the car looks butt-ugly - like this photoshop - as long as it has some LED's. The more LED's the better, right? (irony)

LEXISCONOSUR wrote:I am a big fan of this “con­cept”! i would really like to see the back end though. Any pics of the rear?

None that I've found, I'll be sure to update if I come across any more. :-)
Lexus will blowit. Design wil be mellowed out too much without those LED,s Toyota/Lexus are like a protective father-she can't wear a mini skirt because too many boys may want too look at her
Shut up about LED's please!You think car design is about how many LED's you can put on a car?! Nope! Nope and nope!