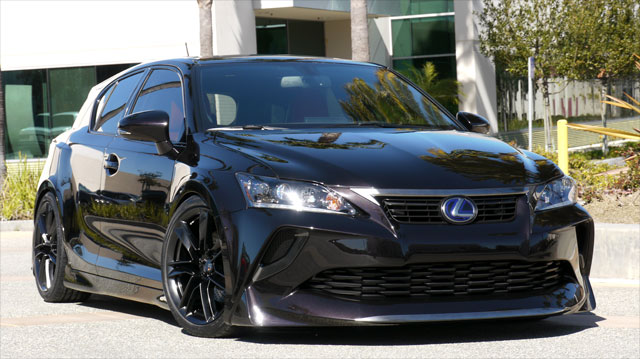 Lexus Magazine has published an interview I did with Five Axis president Troy Sumitomo about the Project CT, the Lexus show car that debuted at last week’s Chicago Auto Show — here’s a clip:

KEVIN WATTS: I know that with the Project IS F, you were inspired by fighter jets—what did you use for inspiration for the Project CT?

TROY SUMITOMO: Because aerodynamics is key to hybrid efficiency, we placed styling emphasis on the front and rear spoiler designs by taking inspiration from lightweight solar aircraft…In addition, we wanted to also recapture some of the strong styling elements that were originally seen in the LF-Ch concept show car shown at Frankfurt last year.

What was the most challenging part about customizing the CT?

One thing we tried to keep in mind was what the feedback from the hybrid community would be. We always try to make modifications that look legitimate. But just having that extra challenge of the CT being a hybrid and the idea that hybrids shouldn’t be messed with was one of the most challenging aspects of this build.

You can read the whole thing here — Troy also forwarded me some photos of the Project CT:

I met Troy at SEMA last year, but only briefly, so it was great fun talking with him — special thanks to him for taking the time to speak with me. (I couldn’t help telling him that his previous Project GS is one of my favorite show cars ever.)

What would have been awesome if they converted it into a 2-door 2-seater, all with Carbon Fibre!
what's the iOS device on the center dashboard?
add is-f v8 = big love

IS-F engine in a CT with FWD! Yes please :-D

It's a concept only, the idea is that users could wirelessly use their iPhone in the dash. Don't really know how it would work. :-)
@Tilps: O.O good lord... I hope someone does that... maybe even make it AWD too
Five Axis handled this vehicle's transformation beautifully! Tasteful and edgy you gotta love it. When I heard they were taking on the CT as a project I had hoped they would replace or alter that huge antenna but maybe not lol! Hopefully the factory will replace it with a "fin" style antenna in upcoming production years.:-)
Not bad.
Wow.... Lexus should definately take this concept and put it into their Fsport model CT in the future.... looks sexy. Now if they could do something about adding bit more power to this 1.8L Hybrid perhaps Turbocharge/Supercharge it??