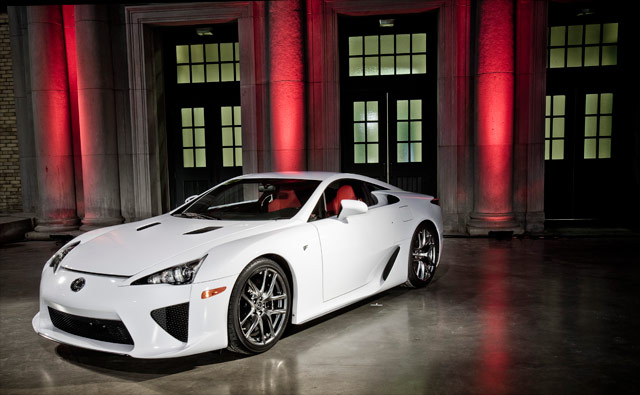 Last week, I attended the Canadian debut of the Lexus LFA at the Exhibition Place in Toronto. On display was a white LFA, which has been sent on loan from Lexus Japan and has arrived just in time to make stops at all of Canada’s major auto shows (including this week’s Toronto Auto Show).

The display was amazing, the LFA all lit up — here are some Lexus-supplied images:

During the introduction presentation, Lexus confirmed that Canada will be receiving 10 LFAs, which will be spread out to owners in Montreal, Ottawa, Toronto, Windsor, Calgary and Vancouver. Vancouver, by some stroke of luck, will be home to 5 of the 10 LFAs.

Of course, given that snow & ice cover just about everything in Ontario, there was no driving time, but we did have a chance to go through a process similar to what actual LFA buyers experienced, complete with the full LFA Configuration Kit — here are some fantastic photos of the full gear:

Interesting fact — just like the LFA, this kit was expensive, costing $20,000 to produce.

So — when it was my turn to customize my LFA? It was a tough call, but here’s what I eventually went with:

Although it doesn’t look like much in this image, the Starlight Black was easily my favorite color in person, it has a ton of this grey/blue fleck — here’s a look at the color sample, though it’s still hard to really see: 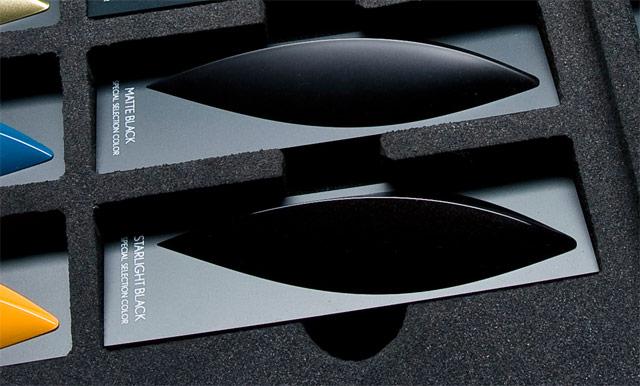 I finished it off with the dark finish wheels and silver callipers, a color that I carried in to the interior:

The interior was something I wavered on quite a bit, especially when it came to choosing between Alcantara & leather — eventually it sunk in that I wasn’t actually getting a LFA, so I went with the silver leather.

All in all, it was a great way to spend an afternoon, thanks to everyone Lexus Canada for their hospitality!

Very nice pictures!
I had no idea that configuration kit was worth so much... it was right in front of me that one time!!!
This is what makes Lexus so special-----detail. I want Lexus to make their flagship LS with Bespoke offerings and selections. I think that if the client can pay----keep it out there to be had. Offer over the top details like RR and Bentley. If the consumer wants his initials etched in stiching and monagrams enlaid in wood---I say go to the next level.The majority of the public will not want it, however, it is available.
Wow! $20k for the kit, that's insane! I agree on the starlight black being the nicest color. It has this daylight effect on it that is gorgeous. If I can correct you on something Kevin, the LF-A was not at the Montreal auto show which is in my opinion one of the major show here in Canada. I have yet to see the LF-A in real life. Hopefully I get to see the one coming to Ottawa.
Considering the number of t-shirt millionaires in Vancouver, it is not surprising that there are 5 destined for this little City. That's great the LFA will be coming to the Vancouver autoshow. Maybe I can convince those lexus guys to bring 11 to the canadian count!
My god... the these pics show how beautiful the LFA is.. I just wanna touch it... After seeing these pics i want my LFA in white.