END_OF_DOCUMENT_TOKEN_TO_BE_REPLACED " /> Lexus & Kylie Minogue Team Up for CT 200h Launch | Lexus Enthusiast
Menu
Log in
Register
You are using an out of date browser. It may not display this or other websites correctly.
You should upgrade or use an alternative browser. 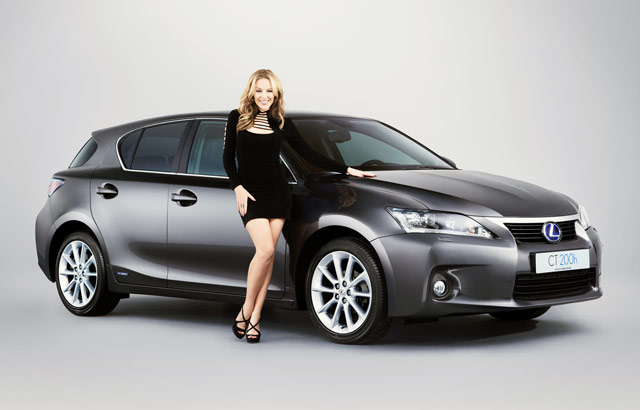 The new relationship will see Kylie – one of the world’s most iconic performers – supporting the introduction of the new Lexus CT 200h through the cross-media “Quiet Revolution” marketing campaign and publicity. In addition to appearing in the upcoming TV commercial and print advertisements, Kylie will take delivery of her own personally specified Lexus CT 200h.

At the same time, Lexus will be the lead sponsor of Kylie’s Aphrodite – Les Folies 2011 UK tour – destined to be one of the most visually spectacular and technically complex shows ever staged in the UK.

Sometimes it’s hard to see the fit with celebrity endorsements, but I’m not complaining this time — I’m even looking forward to the commercials. This is a big score for Lexus UK.

(Coincidentally, this is the second week in a row that I’ve posted a photo of a blonde Australian posing with the CT 200h.)

No offence ... but if I get Kylie Minogue, I'll gladly give up driving and walk everywhere.:-o
Holy crikey's .. seen those legs and i'm sold !!
She's so tiny, now the CT200h looks gigantic...
Well,she´s certainly moving up in the world.From Ford StreetKa to Lexus CT200h;now that´s what I call an improvement!
I knew she was petite, but not how much :P
wait...you mean there's a car in the picture? all I see is legs!!!
I concur with all comments made. :-D