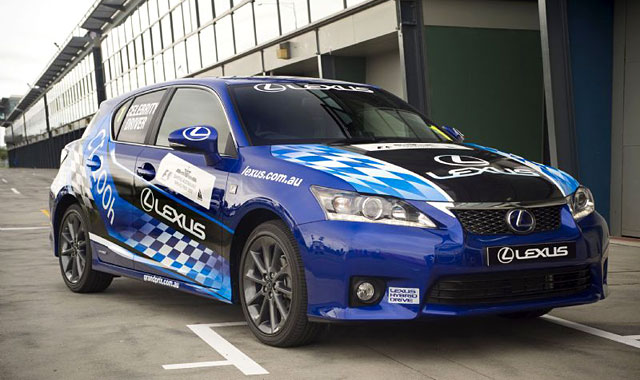 As part of their CT 200h launch, Lexus Australia will be sponsoring the Celebrity Challenge race during the 2011 F1 Australian Grand Prix:

Significantly, the Celebrity Challenge will be the first hybrid-only race staged globally and will mark the introduction of the all-new compact luxury hybrid to the Australian luxury market.

KERS, like in a hybrid vehicle, captures energy and stores it for use later in the race to boost engine power.

In a new initiative, made possible by the Lexus CT 200h, two celebrities will have the opportunity to win – one for outright position and the other for the Le Mans-inspired “index of efficiency” concept, by measuring fuel use during the race.

Carsguide also has an article on this event, and it has a couple interesting quotes:

We want to show that hybrids can be sporty and they can be fun. This is a world first,” says Lexus executive, Peter Evans. “We also think this is the single biggest bang-for-your-buck opportunity to launch a new car in Australia. It’s an amazing platform with 4.6 million people at the peak television viewing and 310,000 spectators over four days.”

“Our target is to try and get a new group. Not so much new faces, but different faces. So not someone like Guy Leech,” he says.

This is a huge event for Lexus Australia, and sounds like a blast — can’t wait to see some racing footage.

Here’s a couple more photos with actress Kelly Landry, one of the celebrity drivers taking part in the race: 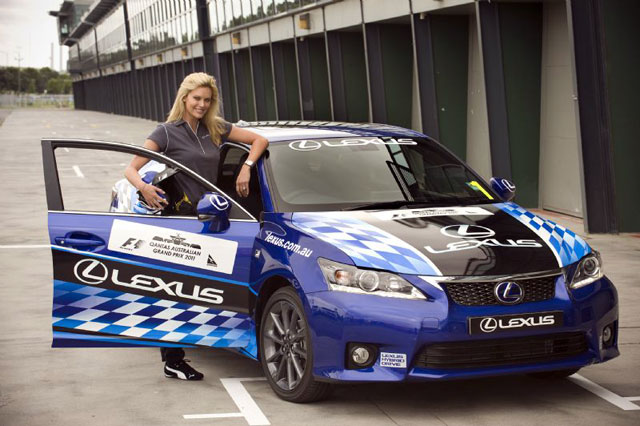 Interesting... I much prefer the V8 racecars they have though :P
does she come with the CT? if so i'm sold :p The car looks awesome in blue, and the graphics don't look to tacky either.
So what happens with the 27 CT's after the race ... are they sold as 'used' through the dealerships ?? As a proud Aussie and a big Toyota and Lexus fan - i will defantly be watching this race. Still hugely disappointed that Toyota withdrew from F1.
What a difference it makes with a sportier front bumper alone. I think the Australians have the better F-sport package.
How is it a race? Its 27 cars that are the same.
@jesseps: Clio Cup, Lupo Cup, Toyota Celebrity Race. All races consist of the same machines and they are very popular and entertaining how racing should be unlike F1. Just because all machines are the same doesn't make it a race. A race is more than 1 car trying to get to the finish first, not more than 1 different car trying to get to the finish first.