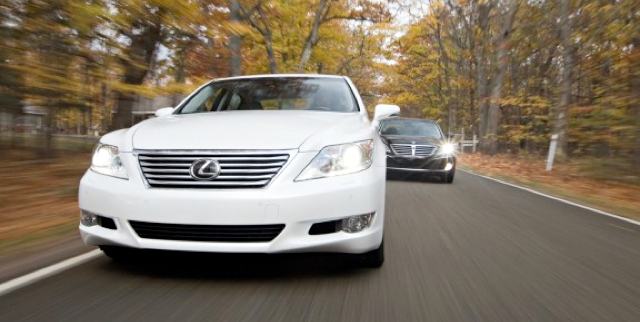 In a classic Car & Driver move, the magazine has taken a $98k Lexus LS 460L AWD and compared it against the new $65k Hyundai Equus, then declared the winner based almost entirely on price:

Were this match based on price alone, we might have pitted an Equus with the Ultimate package ($65,400) against a base LS460 ($66,255), although that would have been limo versus size-XL sedan. Instead, we stacked the Equus against the mighty 4961-pound LS460L AWD dripping with automotive frippery, including a $5860 sleepy-driver alert and $13,200 worth of “Executive Class” rear seats. Limo versus limo. Note the way the Equus undercuts the six-figure Lexus. Just like Lexus undercut Mercedes 20 years ago.

In 1989, a bunch of us cringed at the notion of a $35,000 Toyota. A couple decades shoot past, and we’re staring down a near-$100K Toyota with a hand-sanded body. The original LS400 turned out to be a bargain. Today’s version? Not so much. Our as-tested LS460L cost 50 percent more than the Equus. It thus scored 10 fewer value-for-money points, and that alone was enough to relegate it to second place.

Let’s ignore the fact that C&D loaded up the LS to a ridiculous level then made that the sole reason for Hyundai’s win — what’s missing in this whole Hyundai is Lexus 2.0 comparison is that when Lexus debuted the LS 400 against the Mercedes S-Class & BMW 7-Series, it wasn’t just cheaper, it was noticeably better in almost ever regard — that’s just not the case here.

Not to take away from Hyundai’s achievement, but the Equus is nothing but a copy, and that just can’t stack up against what the LS has become — even Car & Driver gets that:

…we’re serious about this—every car guy on the planet, just once, should experience the LS’s profoundly isolated, tomb-like cockpit. It’s like driving to work in the Bodleian Library. Rest your left arm on the upper doorsill, and you’ll hear your wristwatch ticking. Mat the throttle, and, yeah, there’s a distant V-8 snarl, but the muted whoosh could just as well be emanating from the trunk. 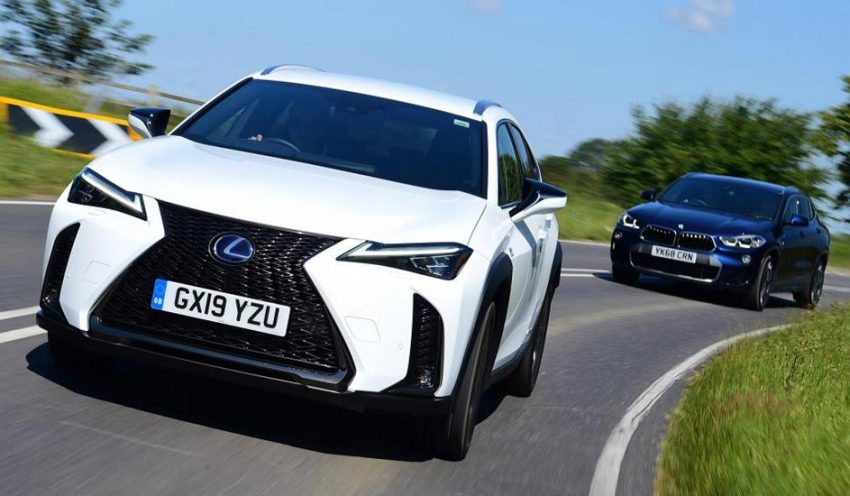 The Hyundia only beats the LS in price.. and that because its a Hyundia... If you want the real deal with no corners cut. Get the Lexus... if you wanna experaince what a Lexus would feel like. Get the Equus.
"A couple decades shoot past, and we’re staring down a near-$100K Toyota with a hand-sanded body." Current Lexus cars have almost nothing in common with Toyotas... they dont even perform the same.. man wha a bias article on their part. Lexus has proved themselves over all these years.. The Equus is a copy of many cars from interior to exterior.. that alone wouldn't make me buy it. Good for the money yes.. but in the back of my mind i couldn't help but think I brought a knock off...

emptystreets130 wrote:@Troub: Probably the dealer. I wouldn’t say it’s just Lexus. Other manufacture has those flimsily bracket. But I wouldn’t take my car to any car wash that can bend a front plate. That right there is a big no no and has to do something with the car wash itself.

I remember how Longo used to have those stiff, metal(-like?) frames. Now, they're just flimsy plastic ones. With the metal ones, I could squeeze a sponge under the license plate with the frame screwed on top, so when I closed the trunk of the cars, the frame wouldn't rattle. You can't do that with the flimsy ones >:-(
The Equus has LED front & rear indicators which the LS doesn't have. Merc S,BMW 7,Maserati QP,Panamera etc all have 'em
Well, the first LED headlumps were equipped on Lexus LS 600h, others followed the trend. I have heard that current safety regulation in Korea doesn't approve LED headlamps for vehicles, so Lexus LS sold in Korea are equipped with ordinary headlupms instead.

Ken wrote:Well, the first LED headlumps were equipped on Lexus LS 600h, others followed the trend.I have heard that current safety regulation in Korea doesn’t approve LED headlamps for vehicles, so Lexus LS sold in Korea are equipped with ordinary headlupms instead.

Same for mainland China. The LSh there also has standard headlights but with the hybrid blue tinting. The LS has had problems in many countries before in terms of getting things approved - e.g. US for the rear-collision system. I wonder how much expense these government regulations add.
@WorldofLuxury: It must cost a lot to pass all the govermentments' regulations from every counties they sold, hey? Talking about regulations, in Japan, the rear turn signal must be a differnt colour to rear break light. Every car sold in Japan has yellow rear turn singnal, including the one equipped with red turn singal in US. This is a symple case, but it must add bit by bit. Its makes sense that manifactures want to built a car where it sold.
what separates Lexus apart from BMW, Mercedes, Audi, and Hyundai is the super reliability. Equus' reliability is yet to be proven, but Lexus don't waste your precious life time going in and out of the dealer like MBW, Mercedes, Audi, and any other luxury cars. I have 1999 LS400 with 180+miles and what i do with it? point A to B on Luxury seat with one of the best sound. Occasional drive to unpaved rough road in mexico is still fine. super comfortable. I've driven my family of 5 making a round trip to Ensenada Mexico from Irvine at one full gas tank means a lot. I get 27 miles per gallon on highway. simply amazing. can other cars can do that? if you know let me know. Equus is nice looking car. some angles does look similar to Mercedes, BMW, Audi, Bently, and Lexus, but it came out okay and it looks good. If the car has reasonable price, luxury enough, and sporty enough with reliability and a good resale value, then the history will definitely repeat itself, just like when LS first launched.