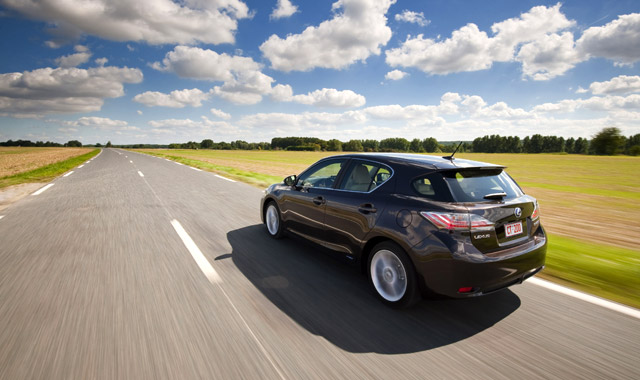 Jason Cammisa’s write-up of the Lexus CT 200h for Automobile Magazine may be my favorite review of the car yet — reasoned and impartial, it also includes a great description of the driving experience:

So, why would you ever choose the CT over a Prius?

For every other reason, starting with the way it drives. The CT200h’s suspension is refreshingly firm, and from the highly supportive, aggressively bolstered driver’s seat there’s no perceptible body roll and not the slightest hint of wallow. Small bumps are felt but barely heard, and the CT refuses to lose its composure over the big ones or in the middle of corners. Although the CT occasionally hit its bump stops over exceptionally rough pavement, even the nastiest cobblestone road you can imagine couldn’t coax a squeak or rattle out of the interior.

That’s exactly what it’s like to be inside the CT, summed up short and sweet.

There was another passage that I liked:

And kudos to Toyota for not just slapping a Lexus badge on a Prius. Sure, a Prius with the Cadillac Cimarron treatment would have been an easier Lexus to make — and might have even appealed to more people than this CT will. But at the end of the day, there’s just no comparison between a pain au chocolat and a Hershey bar shoved between two pieces of Wonder Bread.

No question, the CT 200h could have just been a reskinned Prius — in fact, that’s what I was expecting before driving it — but instead, the Lexus hatchback comes with its own unique angle. Similarities do exist, the two hybrids share the same powertrain after all, but it’s not as pronounced as you might expect.

At the end of the day, it's always nice to have that reassurance that Lexus still has a sense of pride, whether it's for the better of the brand or pure business.