Car Magazine has a supercar comparison we’ve all been waiting for as they pit the Lexus LFA against the Mercedes SLS — some choice quotes:

The LFA in particular is infamous for its insane intonations of raw power. Redlined at 9000rpm where the rev counter changes colour from snow white to devil´s red, the V10 is as intensely shrill as a Moto GP bike or a F1 racer. When the wide white wedge appears at the horizon, bystanders poise their mobile phones not only to freezeframe one of Europe´s rarest sports cars but also to capture that spine-tingling soundtrack.

In tunnels, people inadvertently step on the brake when the Lexus driver floors the loud pedal, because the xenon-eyed noiseball in their rear view mirror sounds and looks like an UFO heralding the end of the world. The SLS is more minor than major, all bass and tenor, roaring tiger rather than howling wolf.

The LFA is a limited-edition high-tech and high-mech item, heart-stoppingly pretty and very nicely put together, a puristic street racer for track days and early Sunday mornings. The SLS is a powerboat for the road, a mighty mauler which evokes fond memories of a glorious past, a surprisingly practical and highly visible tool for the dedicated driver.

Both cars are honest and straightforward, classy and competent, intriguing in the way they present themselves and perform, pleasantly free of gimmicks and tweaks, dynamically focused and deeply rewarding.

In the end, reviewer Georg Kacher takes the SLS over the LFA, mostly due to the stiffer suspension and some transmission jerkiness in the LFA, something he’s complained about before. Even so, it’s clearly a victory by a very narrow margin, and won mostly due to personal taste.

No matter the outcome, the article photos are superb: 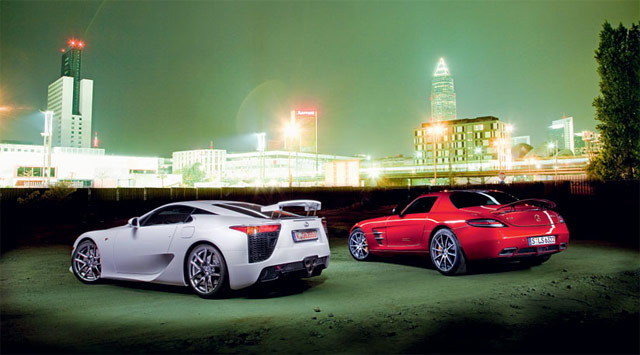 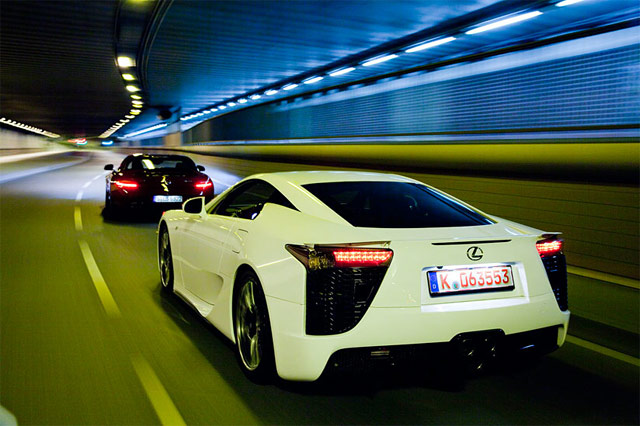 And the best part? This comparison is only one of two — though the second part is currently only available in the actual Car Magazine.

aha Thanks for this article and the birthday wishes Krew! :-D The funny thing is that the jerkiness was intentional upon choice of transmission type by LFA development contributors. I understand what this guy is going through though... the LFA is just too good for him, and he won't admit it! :-P
I've also known for awhile that the jerkiness was intentional, yet most reviews complain about it. Makes you wonder if they too know or if they could influence Lexus to change it
The IS-F shifts at 0.1 compared to 0.2 lowest for the LF-A. My only way of driving the IS is in GT5p and on upshifts it's so seamless there's no throttle lift off unlike the Ferrari F1. Maybe they want that kinda shifts on the LF-A
OMFG FINALLY A COMPARISON WITH THE LFA !!!! Havent read it yet.....lol.
Travis, there is an older one from motortrend with the Nissan GTR.
Definitely digging the Benz's svelte looks in contrast to the IFA's sharp wedge. That said, I wanna hear that IFA soundtrack!
Part 2? Im not sure what else is left to talk about since he came to a conclusion already...
i want a video of the comparison!!!!

Josh wrote:Part 2? Im not sure what else is left to talk about since he came to a conclusion already…

The second part is written by someone else.
He had a pre-production LFA with 5000 miles on it. My guess since it's a UK mag, that it's the same LFA that's been in every other publication and is going on 7 months old by now. I doubt the reviewer had much to contribute because he has 'driven it before' and complained about the transmission. Me thinks he's a sour-puss that dosn't appreciate an active shift. Funny the same magazine complained about dual clutches and said they were video gamey, but then the same publication complains that the LFA doesn't have a dual clutch? Yeah, hypocrites abundant.
I'm guessing that these reviewers have never driven a stick in their lives. The jerk can be founded in many dual clutch/and a properly made semi-manual tranny vehicle. I've been in many cars like the Supra TT, the Jetta, etc and they all jerk when being pushed. Those auto-manual tranny founded in most entry to mid level cars were not designed for the enthusiast but for the mass audience that can't drive a stick therefore the lack of a jerk associated with manual tranny.
I would love to see a performance test between the LFA and the SLS, similar to the LFA-vs-GTR by MT last month. Mr. Katcher is a loyal German car enthusiast. He doesn't want to admit it, using stiff suspension and transmission jerkiness as excuses. The LFA is a rude-awakening for MBZ, BMW, and Audi, just like when the LS first made its debut. The LFA means serious business. Lexus is advancing tremendously and making big leap forward. The Germans may be in denial publicly, but behind close door they have realized that the LFA is a major threat. It's no laughing matter.
o bad world people still biased that should be un biased comparison and lexus should won easily
In city i think Mercedes is better car to drive. But it wont make this overall better car.
reading this article then reading other articles you can see that this guy has no reason to criticize the LFA. The transmission is still in it's pre-production trim. Even Lexus stated they are tuning and working it up to production. Come back next year when we have a production model and someone wants to let a magazine test it against these types of cars. I bet it smokes it. You can't take a pre-production prototype LFA vs a brand new SLS. The funniest thing I heard was when he said that the SLS could corner better than the LFA, haha, that 3600lb. beast? I doubt it.
The second picture from the top ... the Lexus looks so much better then the Benz. Infact, the Benz almost looks clumsy compared to the LFA. Build quality, overall refinement, engineering reliability and comparative performance -the LFA will undoubtedly be my choice and that is not on looks alone. Well done Lexus ... what a terrific car and from here forth, i will look upon most Lexus models from a new direction.

TF109B wrote:reading this article then reading other articles you can see that this guy has no reason to criticize the LFA. The transmission is still in it’s pre-production trim. Even Lexus stated they are tuning and working it up to production.

This is a great point -- and I think especially true since the jerky transmission seems to be the only real complaint about the car.
LFA is without a debt the better car between the two. I read the magazine, and like all other German car praising magazines, they chose the SLS even thought they pretty much stated that the LFA is better in every way. In fact, their numbers were all off; 0- 60 time of the LFA is 3.6. Their time? 3.9, and the SLS a 3.7. Intolerable what they do >:-(
ya i no, germans are like no way and even americans are like no way. they cant stand that a toyota lexus is beating their product.i read his article and in many ways i bet he made correction from writing lexus is better then its rival, but then his like the germans are not gonna be happy.....so he wrote at the end sls is my choice.....no man lfa all day!!!@JVX:
One thing to remember when talking about these is that the LFA costs about twice as much as the SLS. The fact that the SLS holds its own against a car with double the price tag is fairly impressive, and since the SLS provides specs that are pretty damn close to that of the LFA for so much less, I think it deserves to win.

Mercedes has got humaneness amount of speed which makes the SLS a monster car!

SLS AMG is a GT car. LFA is a proper race track car. It has beaten the SLS AMG in AutoZeitung Germany, AutoBuild Germany comparisons lapping a lot quicker and also having much superior driving dynamics. If you read this article, as far as straight line is concerned it clearly says they did about "a dozen drag races and it was a dead heat".
This article is 3 years old. Since then a lot has happened and LFA has dominated the SLS AMG and several other comparisons.