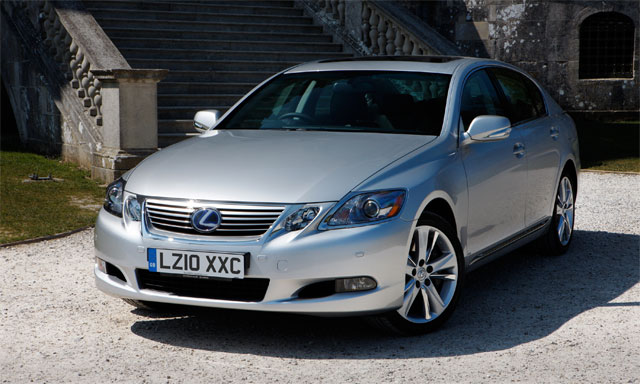 All in all, the 2010 edition of the GS 450h is a very nice upgrade over the 2009 model — upgraded pre-crash safety system, hard drive navigation, three new exterior colors (Vanilla Mist, Richmond Green and Atlantic Blue) and one new interior color (Venaro Grey), plus the new grille and wheel design.

(I’m still not crazy about the wheel design change (to me, the previous GSh rim was second only to the chrome-strip IS F wheels), but there’s no arguing that they would be much easier to clean. Love that new grille, though.)

Lexus has introduced a series of styling, technical and equipment revisions that further strengthen the full hybrid GS 450h’s appeal in the premium saloon market. It has rationalised the model line-up into two equipment grades – SE and SE-L – and introduced new exterior colour choices, alloy wheel designs and interior trims.

The GS, powered by a smooth and ultra-efficient combination of a 3.5-lire petrol V6 and a compact 650V electric motor, delivers sharp performance with fuel economy and emissions that are unmatched by its conventional petrol-powered rivals.

Both front seats have new, inflator-operated active headrests, which are activated by a signal from the ECU should the car suffer a rear-end impact. The inflator slides a piston into the headrest, unlocks the mechanism and projects the headrest forwards and upwards to support the head and reduce the risk of whiplash injury.

Navigation and audio upgrades
In common with its sister Lexus models, the GS 450h has a new 40GB hard disc drive (HDD) navigation system, giving Europe-wide coverage with traffic information data capture in each country. The HDD also provides 10GB of storage space for owners to create their own on-board sound library of digital audio files – room for around 2,000 music tracks.

Styling
The 2010 GS 450h has a new front grille design that features a series of horizontal bars. The hybrid-blue rear lamp clusters have been modified to incorporate larger, transparent outer lenses and a new 18-inch alloy wheel design has been introduced for the SE-L model. The SE version rides on 17-inch alloys, with five-double-spoke 18-inch wheels available in a combined package with parking sensors.
In the cabin there is a new hybrid-blue backlit stop/start button and the choice of a new Venaro Grey semi-aniline leather upholstery option, with contrasting black stitching and grey bird’s eye maple wood grain trim.

The GS really surprises me. The facelifts have given it some nice details I would have never expected from a conservative company like Lexus, but then again, Lexus vehicles do tend to have some nice subtle details too.
I like it except for that grill; It's very cheap looking. It just looks "aftermarket" and doesn't belong on this car (In my opinion).
@Enthusiast: I really like this new GSh grille -- what do you think about the new LS 600hL grille?