The Lexus CT 200h Dark Ride interactive movie has launched today, and it’s super fun — before I give too much away, make sure to go and experience it for yourself: 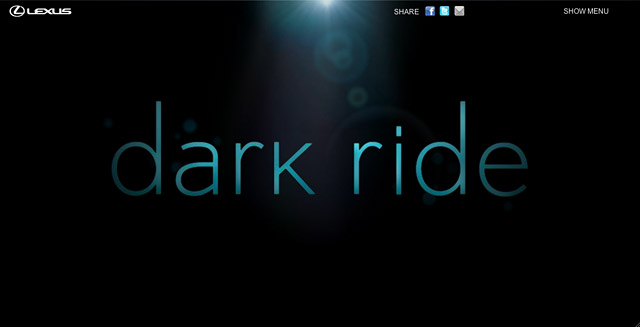 Here’s the trailer, just to jog your memory:

You never know with this sort of thing, but the Dark Ride is total quality, with strong acting and plenty of great little touches (like the whole EV/Stealth mode and being able to use your computer microphone to speak your own dialogue).

I also took some screenshots: 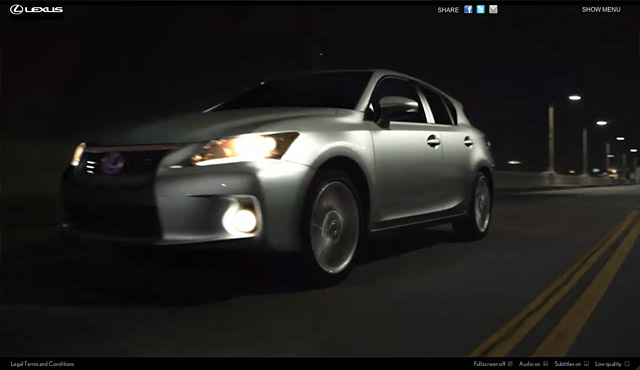 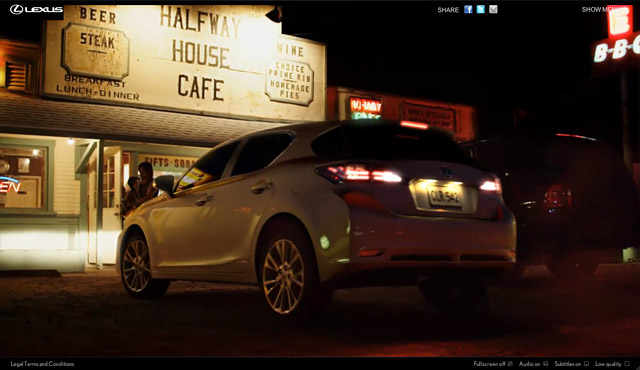 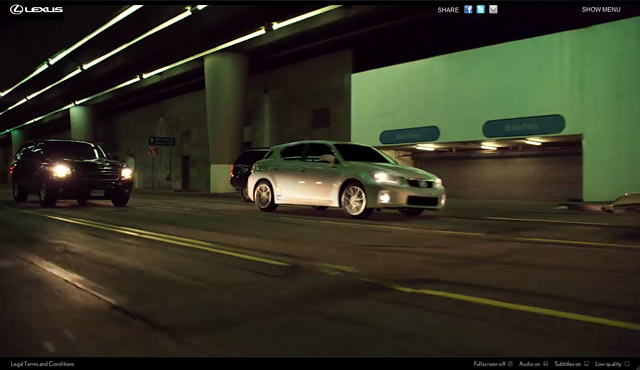 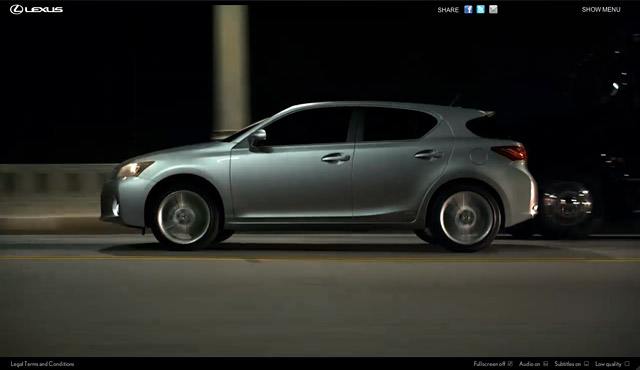 TORRANCE, Calif., May 14 /PRNewswire/ — “Get in, buckle up and start talking.” Lexus customers will be calling the shots in a high-definition interactive film entitled “Dark Ride.” The film features Lexus’ newest hybrid, the CT 200h premium compact car, piloted by actor Norman Reedus (Boondock Saints franchise). Reedus is behind the wheel in this 12:30 action film, but he is following the directions of the person riding shotgun…the consumer.

“With ‘Dark Ride’ we are creating a unique virtual test drive opportunity so consumers can experience this hybrid, that is like no other, months before it is available at dealerships in early 2011,” said Dave Nordstrom, Lexus vice president of marketing. “In it, consumers play a co-starring role as the fun-to-drive Lexus CT 200h is put through its paces. By guiding the driver and the CT through a series of adventures, customers will be exposed to ‘The Darker Side of Green,’ which is completely different than the way hybrids are usually portrayed.”

The film releases online at www.lexusdarkride.com today along with the trailer for the film, which will appear in select movie theaters across the country. Visitors to the www.lexusdarkride.com site will get to insert themselves into the film, sitting beside “Tony” (Reedus), and navigating while he drives the CT 200h from the Nevada desert to a Los Angeles safehouse and protects it from a variety of enemies who wish to get their hands on the new prototype.

Consumers will use an array of interactive features in the film — allowing them to insert their own likeness (via a Webcam or profile pic), record their own dialogue lines, control the camera movement and POV, and make decisions that alter the path of the film so new situations arise each time.

The “Dark Ride” film is the next step in the launch of the Lexus CT 200h and demonstrates Lexus’ marketing theme, “The Darker Side of Green.” This theme, which shines a different light on this new breed of a fun-to-drive hybrid, debuted at a star-studded event prior to the CT 200h’s North American debut at the New York International Auto Show in April. This initiative will continue through the launch period with in-market custom events and a VIP marketing program that will give tech-savvy influencers access to an edited “Dark Ride” list of restaurants, clubs, bars and lifestyle brands. Brand partners include Duncan Quinn bespoke suits, VeeV Acai Spirit, The James Hotel and Grand Hospitality for The Soho and Tribeca Grand Hotels.

The all-new CT 200h premium compact hybrid will go on sale in the U.S. in early 2011 as the first dedicated hybrid vehicle in the premium compact segment. Expected to lead its class in fuel economy, the stylish, sporty five-door also delivers a dynamic, fun-to-drive experience. The CT is powered by a 1.8L Atkinson cycle four-cylinder gas engine with Variable Valve Timing with intelligence (VVT-i) and Lexus Hybrid Drive technology. The CT will be equipped with four drive-modes: Normal, Eco, Sport and EV.

With its reputation for high-quality products and exemplary customer service from its 228 dealers, Lexus has been the top-selling luxury automaker in the U.S. for ten years in a row. In addition, Lexus is the luxury hybrid leader, now offering four hybrids, with a fifth on the way, that provide the best in innovative technology and first-class luxury. When Lexus was established in 1989, it offered two models of vehicles. Now, more than 20 years later, Lexus offers variations of 11 vehicles, from the entry-level IS 250 to its first V10 supercar, the LFA.

such a cute little car... sigh... as long as it doesn't hurt resales for the rest of us, I'm fine with it.
haha... 12 minutes movie and a goof already found by me :) Different type of alloy weels has been used for the movie :-P @seal: Good catch! What did you think about how clean the car was at the end? Anyways, the misleading thing is that hybrids make annoying whines and mosquito ringtone sounds. Nevertheless, it would be funny if the government interfered and demanded that the vehicle moving in EV mode must make some sort of artificial noise. Finally, I'd like to say that I LOVE THIS! LEXUS NEEDS MORE OF THIS! The interactiveness puts Lexus back on par with BMW's efforts on the World Wide Web.
@worldofluxury : Nano Technology Body :-P Anyway.. i really like silver color !!

RDS wrote:Wait … Lexus , Can You Do This To Other Car ? Hehe

That's why the weels are different between the shots ;)