END_OF_DOCUMENT_TOKEN_TO_BE_REPLACED " /> James Martin Reviews the Lexus LFA | Lexus Enthusiast
Menu
Log in
Register
You are using an out of date browser. It may not display this or other websites correctly.
You should upgrade or use an alternative browser.

I drove this Lexus LFA up London’s Regent Street and had a procession of kids following me all along the pavement as I slowly made my way. By the time I reached Oxford Circus there were about 40 of them, all glassy-eyed with amazement – more glassy-eyed than usual, anyway.

…the LFA could be a glimpse of how those future supercars might look.

Fittingly, the styling is like nothing I’ve seen before: it doesn’t have the emotional cues that car designers use. It’s pure function, its aerodynamic surfaces broken up by weird cutaways that make it faster, not prettier.

But at twice the price of a Ferrari, who’s going to buy it?

Actually, I would – if I had silly money.

It’s almost impossible to read a review of the LFA without some mention of it looking like a spaceship — but to back up Martin’s point, here’s some photos of him driving the LFA (as spotted by Flickr user Jeremy Watt), which clearly show the interest the supercar generated on London streets: 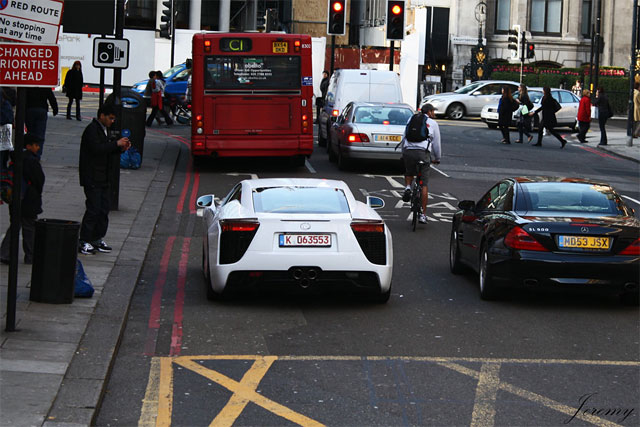 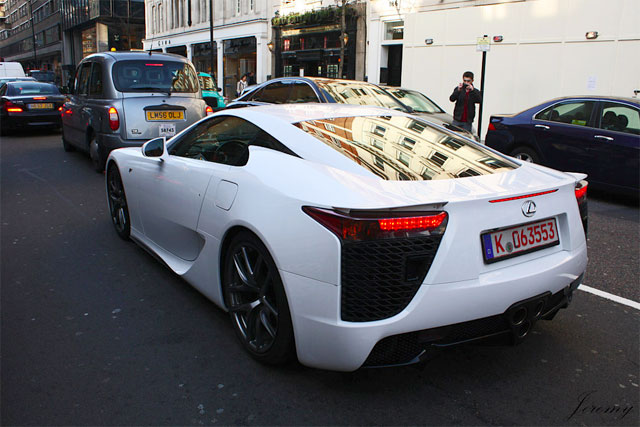 (It certainly looks otherworldy sitting out there in London traffic.)

I completely retract all my previous complaints about the exterior of the LFA! Those pictures of the LFA next to the average crowd (average includes the SL imo) make me get a really satisfying, chilling feeling :-) Why is Mr. Martin or Mail Online so selfish with their pictures? I want that first pic in the article!
Dang... European traffic is so organized while being so much more crazy than anything I've seen in the US and in Asia. And all those people driving on the wrong side are giving me a headache. aha Krew: Your new smileys don't match the ones shown below the comment box.
WOW just wow the main thing make you see how beautiful the car is by putting it with other cars and LFA succeeded
I still say the LFA's limited production run is a crime against humanity.Make more! ;-)
Can't say I agree completely with him... I personally think the design of the LFA is quite pretty ;)

WorldofLuxury wrote:Krew: Your new smileys don’t match the ones shown below the comment box.

Protocol Snow wrote:Can’t say I agree completely with him… I personally think the design of the LFA is quite pretty

Absolutely agree -- but I also think it's so entirely different from European supercar design that it will take people some time to get used to. :-)
in regards to the comments about the PRICE of the LFA, well it doesn't really matter what the price is, you can only get the LFA on a Two Year Lease. It is not available for purchase (at least not in the USA). Another note; "Violet" interior doesn't exactly scream "Masculinity"...lol. That being said, I would take one in ANY color, ...if I only could afford one:-(
@lexusjoe: You can purchase the LFA - just not right away. Hey, that rhymes!
World of Luxury....Please send me $375,000. I will send you my address LOL. Heck, I will even give you a ride in it.
@lexusjoe: If you're really a salesmen (it sounds like you are), then I think we can figure something out ;-)

WorldofLuxury wrote:Why is Mr. Martin or Mail Online so selfish with their pictures? I want that first pic in the article!

The photos in this article are actually by Jeremy Watt. I found them on Flickr.
@krew: lol the picture in Mr. Martin's article. It looks familiar.
Driving the NX 450h+