END_OF_DOCUMENT_TOKEN_TO_BE_REPLACED " /> Lexus HS 250h Sales Target Revised | Lexus Enthusiast
Menu
Log in
Register
You are using an out of date browser. It may not display this or other websites correctly.
You should upgrade or use an alternative browser. 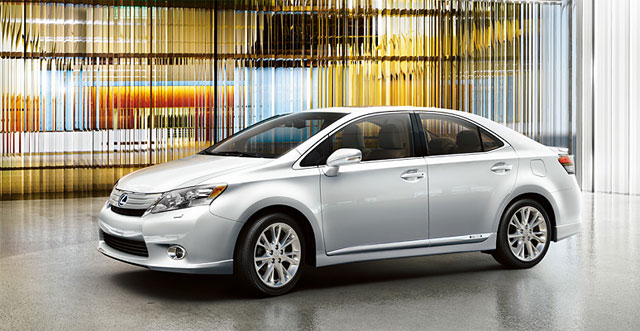 Ward’s Auto has tallied up the HS 250h’s sales to date, and has found that Lexus is on track to sell 14,000 units of the entry-luxury hybrid in its first year, about 6,000 less than previously forecast. Since the HSh’s launch in August 2009, a total of 11,228 units have been sold to date.

According to Lexus VP Mark Templin, the Prius name may have been a factor:

“I think we underestimated the power of the Prius brand,” said Mark Templin, Lexus’ group vice president and general manager. “We overestimated what the market would look like based on gas prices. But if we can do 1000-1500 units a month, we feel really good about what we’re doing in the marketplace.”

P.S. this post is authored by Steve, who previously used the nom de plume Dan.

Lexus HS250h & Toyota Sai , They're Premio/Allion With Camry Hybrid's Powertrain , Isn't It ? But I Like Them , They Looks Nice & Modern . But The Number Of Sales Doesn't Looks Big , Or I'm Wrong ?
Hello Steve. aha Hello Lexus, and Hello Toyota...
@WorldofLuxury: :-D
@RDS: You were dead-on, actually -- HSh sales aren't up to expectations.

krew wrote:@RDS: You were dead-on, actually — HSh sales aren’t up to expectations.

What Do You Means "Aren't Up To Expectations" ?
@RDS: Sales are below target; Lexus was over-confident with the HSh, just as they were with the LX; Lexus is sugar-coating its "mistake" for its shareholders, if there are any for the public.
@RDS: What @WorldofLuxury said. :)
@krew: I wonder if we'll even get another generation of HS?

(Cj) wrote:@krew: I wonder if we’ll even get another generation of HS?

My feeling is that the upcoming mid-cycle refresh is going to be very important for the HSh -- I can see changes being much more extensive than what we've seen in the past. If this gets the model back on track with sales, then I can see a second generation. (However, if Lexus releases an ES hybrid, I don't know that the HS makes any sense in the lineup.)
I was waiting for, and wanted to buy an HS 250. I thought the HS was a great "idea". But the execution is where Lexus failed. It looks to frumpy. When parked next to an ES or IS it looks way to tall and narrow with a too short nose and trunk. But I think the main reason it isn't doing so well, and why I didn’t buy one, is because it doesn't feel like a Lexus. Performance is only OK, but is doesn't sound good when pushed. The motor just drones and there is a surprising amount of road noise. When you close a door it sounds like a Mazda, with somewhat of a tin can sound. And even though the dash is nice, the door panels look cheap. The back seat area is terrible, with absolutely no storage. No pockets behind the seats, no door pockets, no armrest storage, just nothing for the kids to put their stuff in. I am now looking forward to the CT 200h instead.