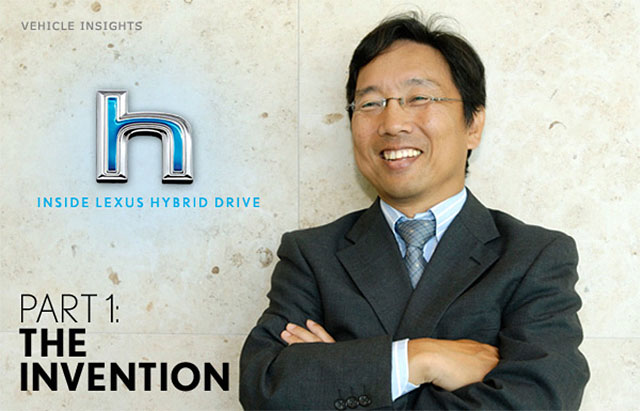 Note: The following interview with Lexus Hybrid Drive chief Shinichi Abe was written by Doug Knox for Lexus Magazine, and is reprinted with permission.

WHEN THE LEXUS Hybrid Drive project first received the green light in the early 2000s, Shinichi Abe, the man about to inherit the biggest thing at Lexus at the time, admits that he and his team shared a few nervous moments.

After all, all that was at stake was the opportunity to help change the luxury auto industry, which had yet to see its first “alternative” energy vehicle on the road. Not only that, Abe had an enormous decision to make: which of Lexus’ several models would get the first hybrid conversion? The flagship LS sedan? The sporty SC convertible? A new model entirely? In the end, Abe’s bold decision belied any initial nervousness.

He chose an SUV.

The result, of course, was the RX 400h, the world’s first ever luxury hybrid vehicle, and a major surprise to many. Weren’t SUVs the opposite of good fuel economy? But to Abe, the decision made perfect sense. “The emphasis was on good fuel economy and low emissions, but also driveability. You do need power in an SUV and we couldn’t have one that drives slowly, could we?”

Abe’s move resolved an automotive paradox: strong performance no longer came at the price of decreased fuel economy and high emissions. In other words, the RX 400h’s new Lexus Hybrid System not only added a fuel-efficiency factor with electric-only power at low speeds—it actually boosted power during hard accelerations by combining the electric motor and gas engine. Lexus drivers could have it all.

And they kept getting it. Over the next four years, Abe and the RX 400h paved the way for an entire family of luxury hybrid sedans, first the Lexus GS 450h in 2005—the world’s first hybrid luxury sedan—and then the LS 600h L in 2006.

With these next hybrids came a new set of challenges, Abe explains. Specifically, these cars needed to be capable of higher speeds than the RX 400h—maximum speeds of more than 150 mph were required to meet customer wishes for Lexus’ top-tier sedans. So Abe and his team developed a transaxle with a smaller and longer motor incorporating a two-stage (high and low) speed-reduction device that functions as a pair of extremely wide-ranging gears.

It’s a beautifully compact solution that allows the Lexus Hybrid Drive transmission to fit in the floor tunnels of the GS 450h and the LS 600h L, like a conventional automatic. It also ensures hugely responsive and extraordinarily smooth power.

Abe recalls, “When I first drove the LS hybrid prototype in 2005, I felt a nonstop speeding up, which was incredible. It felt like being in a jet plane that’s taking off. With conventional gearing, I would have felt the steps between shift changes, but there was none of that, just seamless acceleration. It was a whole new world. It’s hard to put it in words; you only really understand when you try it for yourself.”

It’s not just about phenomenal acceleration, of course. The transmission in every Lexus hybrid, controlled by a harmonious balance of the driver’s wishes and computer software, contributes to an all-around optimal driving experience that embodies Lexus’ four hybrid-vehicle pillars: cleanliness, quietness, fuel efficiency, and fun.
He notes that things are again progressing, most recently with the 2010 RX 450h and HS 250h, which both have the latest-generation Lexus Hybrid Drive system technology, such as a super-efficient Atkinson cycle engine.

As for the future, Abe says that the aim is to have a hybrid version of every model by 2020, and for the cars to be in the same pricing ballpark as those with conventional transmissions.

He admits, “Honestly speaking, this is not what we thought at the beginning, but we have adapted in this direction in our evolution process. We need to do something about the energy crisis. We need to meet new demands. Lexus Hybrid Drive can help do that.” 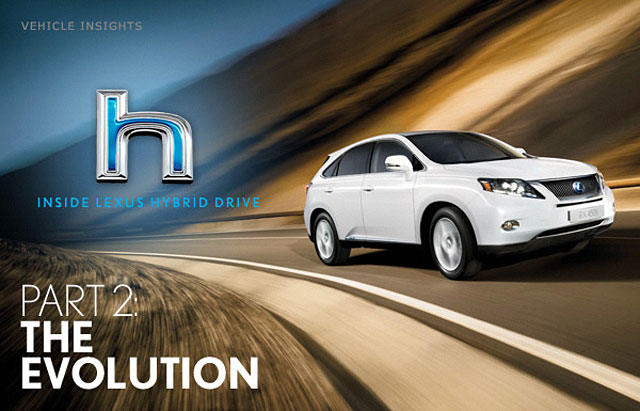 “I speak a kind of suburban London,” I reply in my gray suit and tie (I forgot it was casual Friday at Lexus HQ). “But if I could start again, I’d take California anytime.” We both chuckle. It’s a good start to another fascinating discussion with the mastermind behind Lexus Hybrid Drive.
 
 Last month, we showed you where Abe and his youthful team have taken the Lexus Hybrid Drive system since its invention five years ago. Now it’s time to look, with Abe’s insight, at where Lexus Hybrid Drive technology is right now—specifically the next-generation improvements unveiled in this year’s RX 450h and HS 250h.

Lexus engineers like Abe are guided by something called kakushin—the idea of sudden, significant, breakthrough improvements. A good example: the HS 250h’s top luxury-car fuel rating of 35 mpg (combined rating). Another example: the RX 450h’s emissions drop, from about 185 g/km of CO2 emissions to about 148 g/km.

“These improvements mainly came down to two innovations this year, an Atkinson-cycle engine and Cooled Exhaust Gas Recirculation, two features that we’re considering for all the next hybrids,” Abe explains.

To explain the Atkinson cycle, Abe reaches for a prop: a basketball pump that does a great job doubling as an engine cylinder, where an engine’s piston moves up and down.

Raising and lowering the pump handle, he goes through the basic steps of internal combustion: intake (fuel and air enter the cylinder); compression (the piston rises up and squeezes the fuel-air mixture); combustion (the spark plug ignites the compressed fuel-air mixture, sending the piston downward); and exhaust (the resulting gases from the ignition explosion leave the cylinder before the cycle begins again).

A gas engine piston goes through several of these steps before it can impart adequate torque—the spinning of a shaft that eventually leads to the spinning of the wheels.

Lexus Hybrid Drive’s new Atkinson cycle improves this process. Using the pump, Abe demonstrates how a little air is allowed to escape through the intake valve during the compression step. Letting a little air back out of the cylinder—instead of igniting it all with the fuel—allows the rising piston to compress the smaller fuel-air mixture farther up the cylinder than normal. Once this fuel-air mixture finally ignites, the resulting gases now have more room to expand downward, which results in more pressure on the piston, which in turn leads to more torque.

The cooled EGR does its part in both the RX 450h and HS 250h hybrid systems by capturing some exhaust gas (instead of expelling it all after the exhaust step), stabilizing its temperature, and then sending it back into the cylinders to minimize the pumping losses (the work required to move air in and out of the cylinders), which help reduce emissions levels.

And when you combine these two gas-side improvements with the electric side of Lexus Hybrid Drive, it’s no wonder that RX hybrid emissions are so low and HS 250h miles per gallon are so high. An electric motor, which requires no piston-moving gaseous explosions to create torque, can create it immediately. Pairing an electric motor to an ultra-efficient gas engine not only leads to great eco benefits—it helps make a vehicle more responsive.

Abe, is suddenly reticent. “We will do it. There are plans,” he says, sipping cool oolong tea. “But I really can’t say at the moment. Now’s not the time to give away too many secrets.” 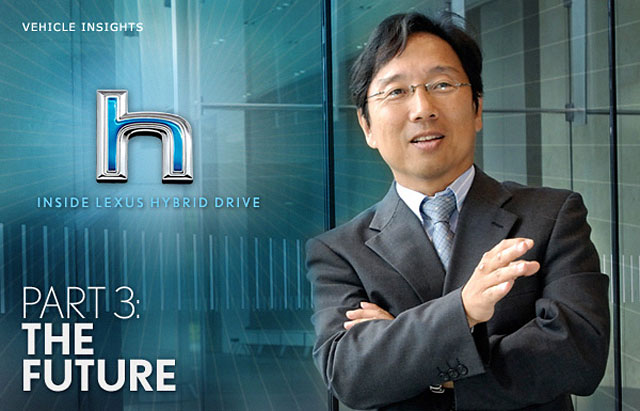 HE MAKES IT sound so simple: “engine, battery, motor.” This is Shinichi Abe, in his office in Japan, explaining the basics of the Lexus Hybrid Drive system, pronouncing the “t” of motor with a soft “d”—an indicator of the years he spent with Lexus in the U.S.

He’s telling me again, as he did in part one and part two of this series, that the Lexus Hybrid Drive system’s electric motor is really where the fun starts, thanks to the extra boost of instant power it delivers.

What I want to look at now, though, is the future of Lexus hybrid systems, and Lexus’ top hybrid engineer is happy to oblige.
 
“The simplicity of Lexus’ hybrid engine-battery-motor platform is what makes it so adaptable to the future,” he explains. “It’s easily adaptable, for instance, to fuel cell technology. Then there are bio-fuels. Here, the basic system would stay the same.”

What about a plug-in Lexus hybrid, I ask? This is a hybrid system where a gas-electric hybrid’s electric motor gets charged externally—a home outlet, say—for more electrical juice than regenerative breaking provides (Lexus’ current system) but with more electric staying power. And like a current Lexus hybrid, this type of plug-in hybrid car eventually engages the engine on longer trips.

I also ask Abe whether Lexus is exploring electric-only vehicles, such as plug-in vehicles that rely solely on electric power, with no gas engine.

“Some people say that it would be better to jump straight to electric vehicles,” answers Abe. “But again, it wouldn’t be right for Lexus at this stage, as there are still too many [electric-only] limitations. So plug-ins, with an engine, would be the natural way to go.”

However, Abe points out that Lexus plug-in vehicles will only be made when they’re ready to meet a long list of Lexus driver-desired performance needs, which Abe and his team constantly examine. Not before.

We also explore Lexus’ role in Vehicle to Grid technology, an automotive idea getting much attention recently. V2G, as it’s also known, establishes a two-way connection between a vehicle and a local power grid. In this scenario, a Lexus owner would either plug in and charge up the vehicle, or plug in and sell the car’s surplus power back to the grid.

Could we be looking at the start of a beautiful relationship?

Abe says he’s looked at—and likes—the V2G possibilities, but he also tells me that even the newest automotive batteries deteriorate quickly during the V2G process. In his view, a dedicated home battery that bridges the vehicle and grid would be a better near-term solution.

As we wrap up, it’s obvious to me that Abe and his team—perhaps because they were some of the first to explore the possibilities—have a deep understanding of automotive energy’s technological landscape. Which is why, no doubt, they’ll probably be the first to make the next jump to something even better.