END_OF_DOCUMENT_TOKEN_TO_BE_REPLACED " /> Rumor: Lexus GS F to have LFA V10 Engine | Lexus Enthusiast
Menu
Log in
Register
You are using an out of date browser. It may not display this or other websites correctly.
You should upgrade or use an alternative browser.

Japanese magazine Best Car is reporting that Lexus is working on a GS F that would pair the current sedan with the LFA’s 4.8L V10 engine.

It seems unlikely to be true, especially the idea that Lexus would be working on a variant of the oldest sedan in the lineup, and is probably wishful thinking on the part of Best Car. While the LFA’s V10 is be lighter and smaller than the IS F’s 5.0L V8, it’s also prohibitively expensive.

Perhaps the strongest point in favor of this rumor would be Lexus stretching out the V10 engine’s development cost, but there’s practically no chance this is coming to the current GS.

While searching for a better quality image than the one above, I found this GS F rendering from Motor Trend Road & Track that I hadn’t seen before, which also mentions using the LFA’s V10: 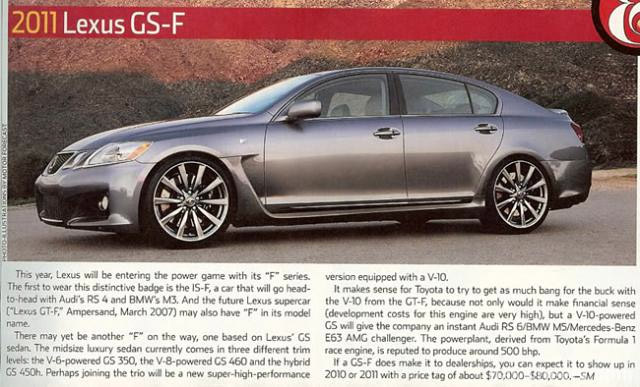 That’s about as successful a GS/IS F merger as I can picture—beautifully done.

Honestly, sounds pretty dicey to me. That's a lot of miles, and a lot of risk.
Driving the NX 450h+